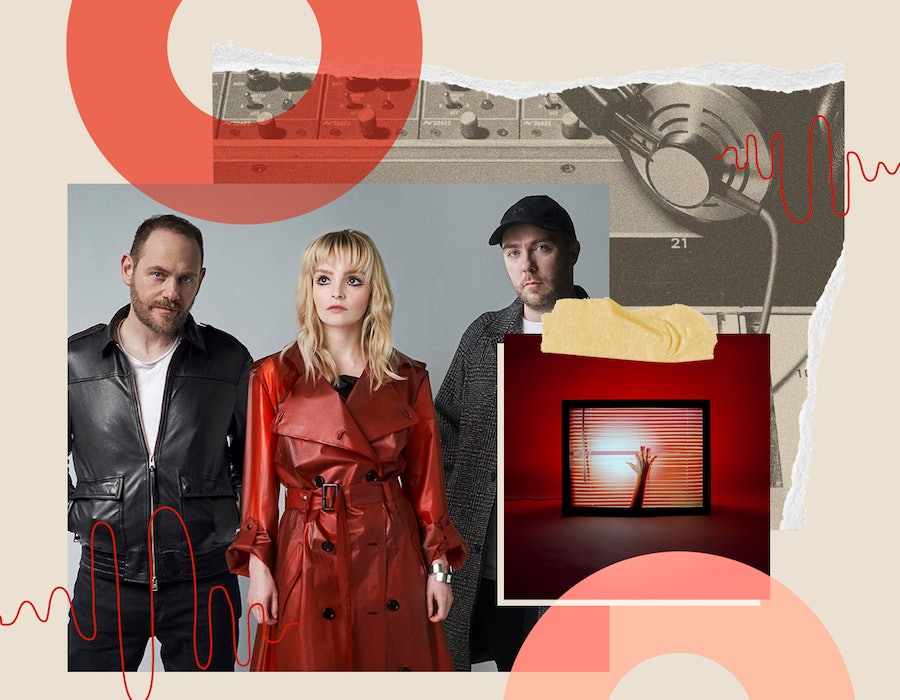 In slasher movies, it all comes down to the final girl: the lone survivor who, after enduring unspeakable trauma, emerges triumphant but changed. It’s a concept that so inspired Chvrches frontwoman Lauren Mayberry she named a song after it.

“I think that all women can relate to the feelings those characters have: of being watched and being hunted and running and fighting for survival in different ways at different times in your life,” Mayberry tells Bustle. “We are all a final girl in some sense.” “Final Girl” is emblematic of the tone on Chvrches’ new record Screen Violence, which takes thematic cues not only from the literal violence of horror movies, but from the inherent violence of a life lived behind screens.

For Mayberry, the concept of screen violence is personal. Throughout her career, she’s endured a raft vitriol online: In 2015, 4chan users threatened her with rape and branded her a “slut” for being the lone subject of the three-piece band’s "Leave a Trace” music video, in which she wears a black dress commenters deemed “provocative”; Chris Brown attacked her and the band on Instagram in 2019 for calling him out as an abuser. “It got to the point where people were more interested in talking about me in the abstract entirely, as clickbait, as a meme, than they were talking about the music,” says Mayberry. “If you’re going to get up every day and have people tell you how much they hate you and how much they want you to go kill yourself, then you really need to be getting a lot of creative reward out of [being a musician].”

The resulting album marries the band’s ‘80s-inflected synth tones with darker lyrics about drowning, getting caught in a loop of terrifying nightmares, and fearing death itself. It will hit hard not just for those who have experienced the more sinister side of the internet, but for anyone who’s spent the last year trying desperately to connect with family and friends on Zoom while the world devolved into chaos. “It’s hard to emotionally connect with people over those devices,” says Mayberry, who worked on the album remotely while separated from fellow bandmates Iain Cook and Martin Doherty during the pandemic. “As much as it was deeply unpleasant to be totally by myself trying to make a record, in a weird way it functioned as an enforced writers camp because there was nowhere for any of us to go to escape.”

Screen Violence feels like something from the world of John Carpenter, admittedly creepy but still filled with deeply human truths. For Mayberry to tell the stories of past horrors, she had to dredge up a lot of darkness — but just like the final girl, she’s emerged bruised but stronger than ever.

Below, Mayberry muses on horror movies, the Spice Girls, and working with one of her idols.

On The Dark Corners Of The Internet & Rosemary’s Baby

Screen Violence has a lot of horror movie imagery in its lyrics. What about the genre inspired you?

I have always had a morbid fascination with horror movies and specifically female characters in horror movies. But I also think that there is this kind of morbid fascination with violence towards people and this grotesque crowd of watching things happen [online]. I have definitely been a part of that in terms of watching what has happened to other people in the media, but when you’re on the receiving end of that it does feel very alienating and abstract. You feel like you’re running, running, and not getting any further away from the thing that’s chasing you.

It feels like we can all relate to Laurie Strode [of Halloween] or Rosemary Woodhouse — she’s not even in control of her own body in Rosemary’s Baby. Roman Polanski discussion aside, the story of Rosemary's Baby is really disturbing: a woman is being manipulated and she’s not even safe in her own relationship, in her own life. In spending time researching all these women and all these stories, it was clear that the world is just not set up for all these women to win, but they’re trying against all odds to claw their way through to the next chapter.

The lyrics, “Good girls don’t die / And good girls stay alive / And good girls satisfy but I won’t” off “Good Girls” are so brutal. It seems like a lot of the sentiments on this record are about being fed up with the expectations the world has put on you. How do you deal with that pressure?

That song is about growing up enough so that you realize the rules you were told we are all playing by are not actually true. You’re always told that bad things don’t happen to good girls, and as a girl, as a woman, if you do certain things you will be safe, you will be acceptable, you will be okay — personally, in relationships, in life. That is just not f*cking true. The chorus of “Good Girls” for me is almost an aspirational version of how I would like to conduct myself. I am definitely not perfect in any of those ways; I look back and I have definitely compromised myself at certain points in my career in terms of not being true to what I thought.

How have you compromised yourself?

There was a phase I went through where I thought if I wear no makeup and a flannel, no one will try to undercut my artistry or say I am here for anything other than creativity. But I look at that and think, why should I do those things? It’s weird that if David Bowie wears makeup he’s an incredible artist and creator, and if a female artist puts on makeup, it’s because they’re trying to appeal to men. I just think that is a very f*cked up narrative, and we have all internalized parts of it. Women are trying to figure out how to exist within somebody else's rules, and that is incredibly frustrating. No matter what you do, no matter what compromises you make, it is never going to be enough. In your professional life or in your personal life.

On The Cure & Rage-Writing Lyrics

I do enjoy karaoke. I feel like the point of karaoke, especially if you’re there with other musicians, is not to do good karaoke. You should be doing something incredibly passionate or an impression. I feel like good singers would get up there and try to sing it very well and I’m like, “f*ck off, join a band.” For me it’s Alanis Morissette every time, I will go for anything off of Jagged Little Pill. I have been known to go for a little Dixie Chicks every time and Rihanna you can’t beat a bit of Rihanna.

I’m no stranger to a little bit of Whitney [Houston], I feel like that is going to go down well anywhere but it is a lot sadder these days. If I want to keep things up, I’ll put on “Step by Step” by Whitney Houston because that is a double hitter for me, because Annie Lennox wrote that song. [It’s] two legends in one place, and if you listen you can hear Annie Lennox’s vocals in the backing track.

As a small girl in the UK in the 1990s, it was the first Spice Girls record. There were elements of the Spice Girls which I wouldn't cosign on as a grown woman, but as a little girl it was so exciting. It felt like it was a band for us in a way that the other things playing in the house weren’t. I definitely also bought a lot of compilation and Top 40s records and big weird compilations you would get at gas stations that were like Best of Country, Best of Soul, Best of ‘80s. I feel like those things in hindsight were quite a good education in finding things that weren't super contemporary at the time.

What’s the weirdest way a song ever came to be?

One of the biggest songs we’ve ever written in terms of sales is a song called “Here with Me,” which was a collaboration. I wrote those lyrics in a massive angry rage because I was really annoyed at Martin [Doherty] from the band. We were disagreeing on lyrics or what we were trying to do because we were going to pitch [the song] to somebody else. I was like, “I don’t want to write tacky pop crap lyrics, I hate that, but if you want me to do it I guess I’ll just f*cking do it, you want it to rain... here you go.” I wrote what I felt was a parody of what he wanted, and we sent it to the publishing company, and they were like, this song is a banger. It just goes to show that sometimes good songs come from strange places.

I feel like on this record we all kind of pushed ourselves to evolve. We were also lucky enough to get Robert Smith from The Cure to collaborate with us on a song and it still boggles my mind that that happened, because we are all such huge Cure fans and in terms of songwriting and lyrics he is one of, if not my ultimate, favorite. The fact he saw anything in what we were doing and wanted to collaborate with us is kind of the best endorsement you can ever get. If Robert Smith says we are a band, then we must be a band.

More like this
Craig David Is Still Slicker Than Your Average
By Olivia-Anne Cleary
Even If She Tried, Beth Ditto Couldn’t Stay Away From Music
By Ivana Rihter
'School Of Rock' Changed Joe Keery's Life Forever
By Alyssa Lapid
Everything To Know About Taylor Swift’s 10th Studio Album, 'Midnights'
By Grace Wehniainen and Jake Viswanath
Get Even More From Bustle — Sign Up For The Newsletter