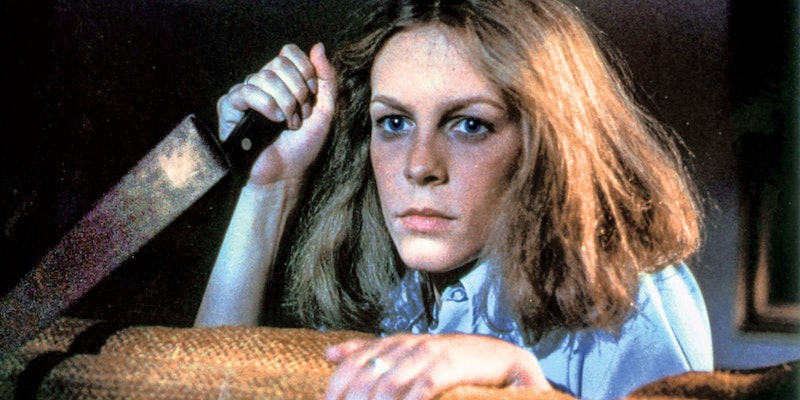 You don't have to be a huge horror movie fan to be familiar with the "final girl" trope — you know, when a (typically young, virginal) woman remains the last one standing after a killer murders everyone around her. It's been seen in films ranging from Scream to Alien to Friday the 13th, but many argue that one of the very first "final girls" was Laurie Strode (Jamie Lee Curtis) in 1978's Halloween. For decades now, critics and fans alike have discussed the movie's female empowerment message and praised the character of Laurie as a feminist hero — but when I chat with Curtis on a recent September day, she tells me that we've all gotten it wrong.

"The movie has bred 1000 PHDs, but... in retrospect, I know that was not the intention here. It was not a feminist statement. It had nothing to do with the fact that promiscuous girls died and the virgin lived, none of it," says Curtis. "Many people say the intention was something else, and I’m gonna tell you it wasn’t."

The actor's words might come as a shock to some, considering how much, as Curtis notes, has been written about the supposedly overt feminism of Halloween and its several sequels. But she's adamant that while people may take away what they want from the movies, Laurie was written in a straightforward way that, in the original film at least, had nothing to do with her gender.

"It was written as an emotional journey of a very vulnerable girl being chosen as the centerpoint of this story, where this vulnerable creature is in collision with pure evil, and she’s somewhat an archetype of this young vulnerable dreamer," explains Curtis. "I don’t think there was an intellectual analysis attached to it in the slightest."

That said, the latest installment in the franchise is intentionally feminist, which no one disputes. Halloween, out Oct. 19, is a direct sequel of the 1978 film, featuring Curtis' Laurie 40 years after surviving Michael Myers' killing spree. Still suffering from severe PTSD ("it was a very honest way of talking about 40 years of trauma," Curtis says of the script), Laurie has strained relationships with her daughter, Karen (Judy Greer), and teenage granddaughter, Allyson (Andi Matichak) — but the trio band together when Michael escapes a mental institution and hunts down Laurie once again. Yet unlike in the first film, Laurie is no helpless victim here; she's spent years physically and mentally training for a showdown with Michael, and has equipped Karen and Allyson to do the same.

For Curtis, playing Laurie at these different stages in her life has been an emotional journey, and while the character's personality has changed over the 40 years, the actor's feelings towards her have not. "[I think of Laurie with a lot of love," explains Curtis. "A lot of gratitude for her resilience and her strength and the fact that I got to portray a really smart, articulate woman... I’m grateful to her, and of course I love her and always have and always will."

In 2017, Halloween co-writer Danny McBride told Yahoo Movies that he and director David Gordon Green began work on the script without knowing whether Curtis would be on-board to reprise her iconic character. But of course, they badly wanted the actor back in the role — so they worked to "really make that Laurie Strode character something she wouldn’t be able to say no to," fleshing her out into a complex, compelling human being. Clearly, their efforts worked, but when I re-tell this story to Curtis, she just laughs.

"Well that sounds like bullsh*t," she says. What actually convinced her to play Laurie again was a now-cut early scene from the film in which Allison, looking for a change of clothes, runs into her bedroom and opens the door to the same closet — complete with that bare lightbulb — that a terrified Laurie hid in all those years ago.

"And that got it for me," explains Curtis. "Because I knew we were talking about a 40-year sequel, and the way they were opening it was my granddaughter running through Haddonfield and going up to her bedroom to change into her school clothes and opening the louvered closet door, which 40 years ago, I was crouched inside of, with that bare bulb, which illuminated and then went out, and then Michael Meyers had the knife and all of that — I just thought it was such a clever way of sort of putting us back in the closet 40 years later."

Curtis has an obvious love for the franchise, but that doesn't mean the actor is already thinking about playing the character once again; although it's been reported that Halloween's screenwriters have ideas for a sequel (and the movie's ending indeed leaves plenty of room for one), when I ask Curtis if she'd be down for a follow-up film, she explains that she's busy focusing on the present — like, the very present.

"You know what? All I know is that I’ve eaten half a box of peanut M&Ms during the course of our conversation. And I am happy to be in this movie," she says, as matter-of-fact as it gets. "Today I’m in Austin, Texas in a tower eating peanut M&Ms and talking to you. I have no idea what tomorrow’s gonna bring. I hope not a box of peanut M&Ms."

Leave it to Curtis to keep things as pragmatic as possible, whether that's Halloween's message or her snack preferences for the coming days.