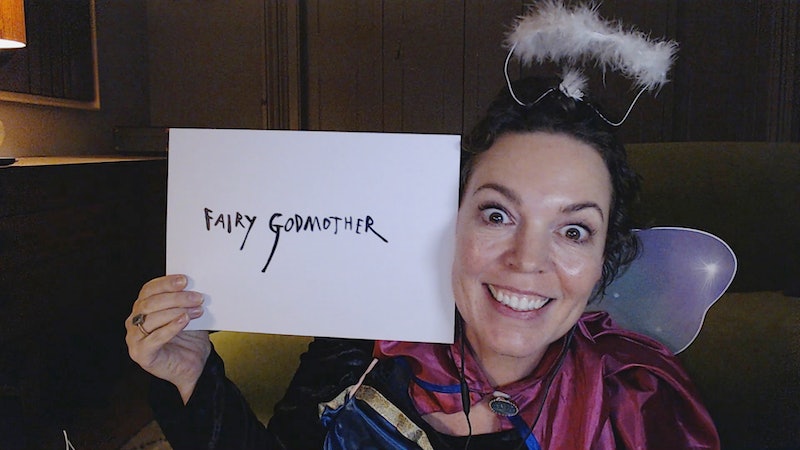 The Christmas TV specials just keep on coming, but I have to say, Cinderella: A Comic Relief Pantomime may be the most exciting so far. It will see a re-telling of the classic story taken on by a cast list made up of Netflix's The Crown and The Queen's Gambit alumni. Here's how to watch Cinderella featuring Olivia Coleman, Helena Bonham Carter, and Anya Taylor-Joy.

The upcoming Christmas special will allow theatre fans to get their panto fix this year, despite not being able to go in person due to COVID. Cinderella: A Comic Relief Pantomime was safely filmed online, and is being shown on BBC Two on Christmas Eve for us all to enjoy.

The charity performance features both Olivia Coleman and Helena Bonham Carter of The Crown as well as The Queen's Gambit's Anya Taylor-Joy. While Taylor-Joy takes on the lead role of Cinderella, Coleman will be the Fairy Godmother, while Bonham Carter stars as the villain everyone loves to hate, the Wicked Stepmother.

Other stars joining the cast are Tom Hollander (as Cinderella's father), Daisy May Cooper and Charlie Cooper (Evil Stepsisters), and Regé-Jean Page (Prince Charming). Plus David Tennant, David Walliams, Aisling Bea, and many more stars will be popping up for the virtual performance.

This version is based on an original script by Ben Crocker, and will be accompanied by hand-drawn illustrations by Quentin Blake to bring the performance to life on TV.

Comic Relief founder Richard Curtis said of the TV special: “We're hugely grateful to BBC2 and the amazing cast for allowing us to do our first ever pantomime.

“It'll be very funny and merry – and also a great seasonal opportunity to raise crucial funds for the projects that will help the most vulnerable people, at home and abroad – especially now when Covid has made things harder than ever for many.”

Cinderella: A Comic Relief Pantomime will air on BBC Two on Christmas Eve at 8:15pm. It will also be available on BBC iPlayer afterwards.