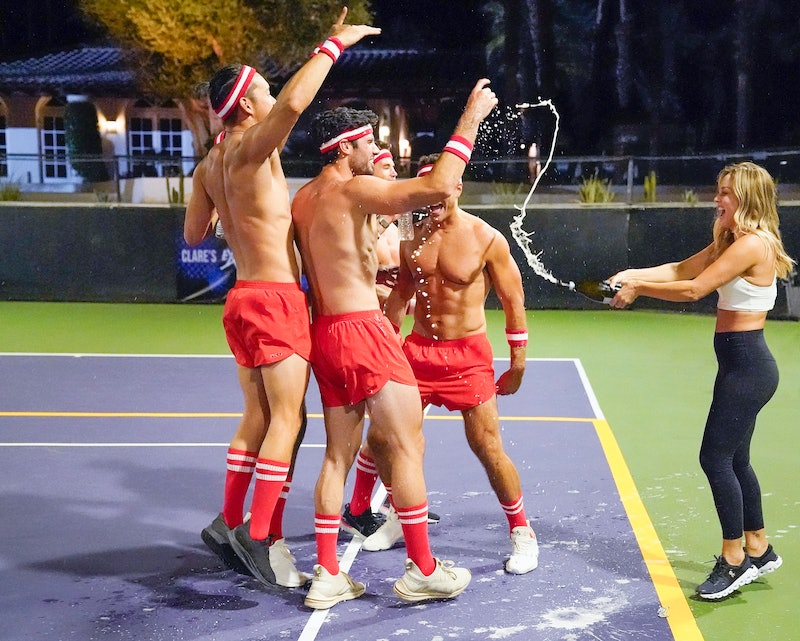 Fans of The Bachelorette had a lot to say after last week's episode — especially when it came to that awkward game of strip dodgeball. Immediately upon airing, Twitter lit up with criticism from viewers who felt the game was inappropriate and demeaning. But according to her recent Twitter likes and a tweet that took aim at Juan Pablo's season of The Bachelor, that risqué game of dodgeball wasn't Clare's idea at all.

The controversy began on Oct. 20, when the episode showed Clare judging a game that required some of her suitors to take off their clothes. As reported by Cosmopolitan, fans had concerns about the game, saying that it was degrading and that it "objectified" the contestants. Several other fans pointed out that if women on The Bachelor were forced to play a similar game, many more people would be upset.

On Monday, Oct. 26, Clare responded to a tweet that pointed out the hypocrisy of the date. "Juan Pablo should have had you strip," it said. What this person wasn't anticipating, however, was that Juan Pablo did have degrading dates planned on his season, and Clare came through with receipts. "You mean like this?" she tweeted alongside a photo of contestants Andi Dorfman and Lucy Aragon, who were wearing just their underwear. Clare also liked a tweet from a fan that insinuated she wasn't the one who planned the date: "It's almost like making contestants take their clothes off is a really tired production trick and wasn't your idea at all."

That's not the only Twitter activity Clare's been up to lately. She also liked a series of tweets from someone accusing the show's producers of "trying to force her out" from the season. Back in August, it was reported that Tayshia Adams would replace Clare as the Bachelorette after she reportedly fell in love with contestant Dale Moss and decided to end her journey. However, these tweets tell a different story, accusing producers of giving her a "bad edit" and having Tayshia quarantined only nine days into filming.

"They wanted to remove Clare. And I just don't think it's fair," one of the liked tweets read. "Production knows exactly what they were doing... They were ready with a back up and as soon as they found out that Clare was into Dale it was a wrap." As of press time, Clare has still liked the tweets, but neither producers nor ABC have responded to the accusations. Regardless, it seems that Clare may be more focused on production rather than her former contestants at the After the Final Rose special.