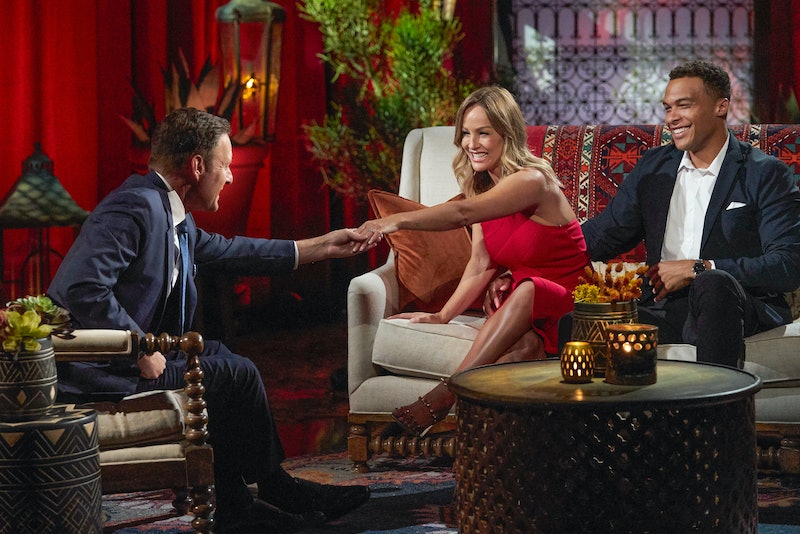 If you thought we were finally done with Clare and Dale on The Bachelorette, you were, unfortunately, mistaken. During Tayshia's first episode as lead, the now engaged couple sat down for one final interview with Chris Harrison. And Bachelorette fans couldn't have been more uninterested. "How do we tell chris NO ONE cares about clare and dale?" tweeted one viewer, summing up everyone's collective thoughts.

During the interview, the couple revealed no new information and instead simply recapped their two-week love story for a third (?) time on TV. Clare confirmed, yet again, that Dale is her soulmate, and Dale said the same of her, claiming that their introduction was "love at first sight." He added that he was shocked to learn that before they got engaged they were "saying the same things without even knowing it," to which Clare nodded. “Everything he was looking for was everything I was looking for," she said.

The interview got a little intense when Harrison confronted them, once again, about whether or not they slid into each other's DMs before filming. Clare doubled down. “100% no. And I can attest to this on my dad’s grave," she assured. "There was never, ever a single ounce of contact or communication through friends, through outlets, through phone numbers or any sort of anything." She added that she did follow Dale on Instagram, but she "followed lots of guys" and found that Dale was "being a strong man, but opening up and being vulnerable," which she liked.

"I think people need to think about that … I understand that it was fast-paced, but this is the first time a 39-year-old woman sat up here," she said. "And I know exactly what I’m looking for." Now that she has it, she's planning for what's next: a house, a wedding, and hopefully babies.

Best of luck to them both! Now onto Tayshia's very important splashball tournament.