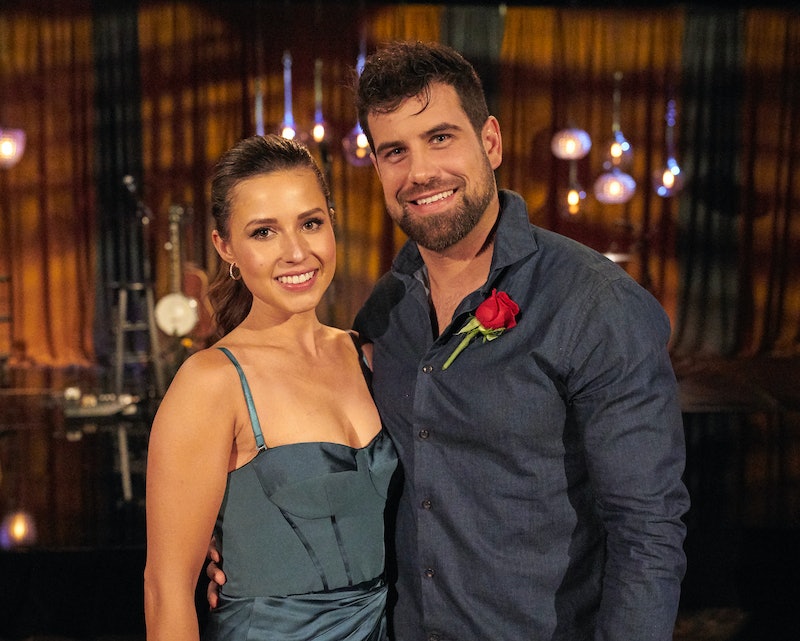 Despite arriving several weeks into filming, Blake Moynes swiftly made up for lost time with Bachelorette Katie Thurston. Shortly after the 30-year-old Canadian joined the season, Katie chose Blake for a coveted one-on-one date during which she confirmed he checked all her boxes, including that he’s “a good kisser.” The two’s palpable chemistry naturally led Bachelor nation to begin considering Blake a front-runner, and several social media clues could point to him getting Katie’s final rose.

Firstly, Katie dropped a subtle hint about her future with Blake before ABC even broadcast his arrival in the June 28 Bachelorette episode. After a fan commented on one of her Instagram posts that they couldn’t wait for the upcoming episode, Katie replied, “It’s a good one, maybe my favorite so far.” Could it be a coincidence that her favorite episode is the one in which Blake shows up? Perhaps, though it’s hardly the only evidence supporting him being the winner.

Further fueling speculation, Blake’s mom, Emily Moynes, dropped another possible clue on social media. On July 4, a Bachelor Nation fan account on Instagram reposted a TikTok about Blake “showing up to date the third Bachelorette back to back,” referencing the fact that he’d also competed on Clare Crawley and Tayshia Adam’s Bachelorette seasons. “We can’t get rid of Blake but we ain’t mad about it,” the caption read.

Blake simply commented, “Lollllllll,” but his mom also chimed in. “Always taught him If at first you don’t succeed, try, try and try again!!! He listened…” she wrote. Does that mean this Bachelorette stint ended successfully for Blake?

The wildlife manager has seemingly been dropping a few hints of his own. Though it’s not surprising that his Instagram features pictures of several animals, some fans couldn’t help but notice that around the time Katie’s Bachelorette season began filming, Blake started posting a lot more photos of cats. (If Connor B.’s limo entrance didn’t give it away, Katie just so happens to love cats.)

“It’s OK to be a cat guy. Tell me why it’s not,” Blake captioned one post in March. On June 24, he also posed in a “Cat Daddy” T-shirt with his pet Bear, noting that he was “just trying to even out the ratio” on dog-to-cat recognition. In fact, Blake has an entire Instagram stories highlight section dedicated to his “#catdaddy” posts. Given that he and Katie have both admitted they exchanged DMs prior to The Bachelorette, maybe Blake was hoping their mutual love of cats would catch Katie’s eye.

Katie also had an interesting choice of words when describing her Bachelorette journey as a “wild ride” to Glamour. (Reminder: Blake is a wildlife manager.) “You think you know what you’re getting into, and you think you know the format of falling in love, and you don’t,” she told the magazine, hinting that her season ended “in the most unexpected” way. “Life happens the way it’s supposed to, love happens the way it’s supposed to, and that was my biggest lesson through it all.”

These are all admittedly thin clues, but Bachelor/ette fans have had less to work with in the past and still made a correct prediction. It’s clear Blake and Katie have a strong connection, and they’re both serious about settling down. Perhaps they’ll be able to make that commitment to each other.

More like this
Mack & Domynique Reportedly Had An "Epic" Breakup On 'Married At First Sight'
By Brad Witter
All The Clues Clint & Gina Aren’t Still Together After 'MAFS' Season 16
By Brad Witter
A Guide To All Of Zach Shallcross' 'Bachelor' Filming Locations
By Brad Witter
10 Photos Of The Wildest Limo Arrivals From 'The Bachelor' Premiere
By Brad Witter
Get Even More From Bustle — Sign Up For The Newsletter
From hair trends to relationship advice, our daily newsletter has everything you need to sound like a person who’s on TikTok, even if you aren’t.