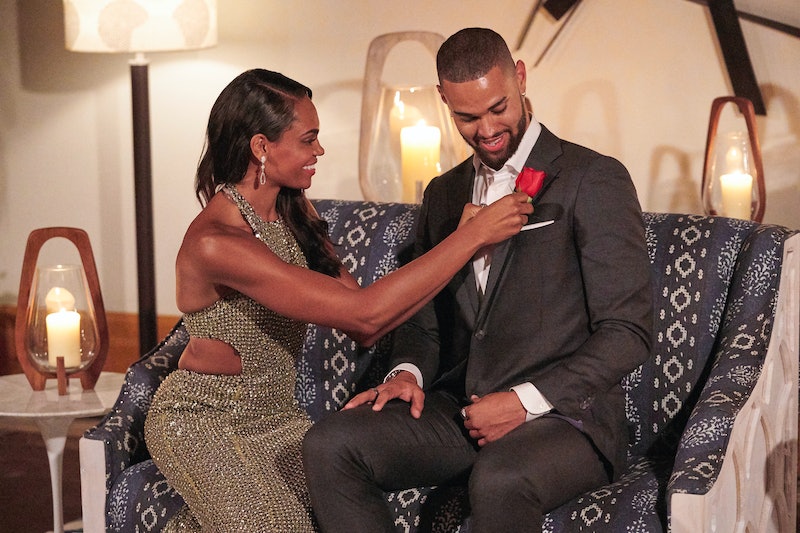 It didn’t take long for Nayte Olukoya to become a frontrunner on Michelle Young’s season of The Bachelorette. Not only was the 27-year-old sales executive the very first contestant to step out of the limo, he also earned Michelle’s first impression rose following a frank chat about their parents’ marriages and his difficulty in being vulnerable.

“I’m not a love-at-first-sight [person, but was] honestly very attracted to [Nayte] as he came out of the limo,” Michelle explained to Entertainment Tonight. “I think the biggest part was when we sat down, we just had a natural conversation. That’s kind of where that rose came from.” In the same interview, co-host Tayshia Adams added that Michelle and Nayte had “an unspoken chemistry ... which was really cool to watch.”

Nayte was similarly taken aback by his connection with Michelle. He said on the Bachelor Happy Hour podcast that though their “initial connection was definitely sparks,” he had “not an inkling at all” that Michelle would give him the first impression rose. The kiss they shared also caught him off-guard because he’s “not a smooth individual” who can pull off a kiss “like what you see in the movies.”

“She kissed me, and you see that genuine reaction where I was not expecting that, but, boy am I ever happy,” Nayte explained on the podcast, unable to stop smiling. “I remember I joked with her, like, you just opened up a can of worms because every time I see you now, I’m gonna want to kiss you.”

Nayte added that he “did not have a clue” the first impression rose carried so much weight and didn’t realize how “big time” it was until his roommate Rodney Matthews explained it. Afterward, Happy Hour co-host Becca Kufrin informed Nayte that Bachelorettes have a “really, really good track record [that] whoever gets that first impression rose is the last man standing, who typically she gets engaged to,” citing herself, Kaitlyn Bristowe, JoJo Fletcher, Rachel Lindsay, and Clare Crowley as recent examples.

Indeed, Suzana Somers, who runs the @BachelorData Instagram account, told Bustle that the first impression rose is one of the strongest trends in predicting Bachelorette winners based on the years of data she’s collected. She noted that six first impression rose recipients have won on the show, with a majority of the non-winners making it far regardless.

Other clues that Nayte could be Michelle’s winner? According to one Reddit user, he’s reportedly the only contestant Michelle’s sister-in-law follows on Instagram. Eagle-eyed fans also noticed that Michelle and Nayte have been viewing that same fan account’s Instagram Stories about them, leading many to believe that they’ve been sharing them with each other.

Beyond that, Nayte has been sharing loving tributes to Michelle on Instagram since the season began airing. “I love the way Michelle and I look at each other,” he captioned a still from the series in a November post, comparing their gaze to the way his dog Percy looks at treats. Bachelorette detectives also think Michelle might have hinted she was with Percy (and thus, Nayte) recently. In a Nov. 14 Instagram post, she wrote that she’d just had a weekend “filled with fresh air, cozy fires, and dog hair. Commenters noted they’d been trying to spot reflections in the photos to confirm their suspicions. However, Michelle was holding her own dog in one photo and Nayte posted he spent that particular weekend with friends.

It doesn’t hurt that the pair have a lot in common, including that Nayte used to be a volunteer teacher’s aide. He’s also an avid reader, and Michelle has said that she’s looking for someone who can challenge her intellectually. Plus, the two have similar relationship red flags: Michelle doesn’t like people who get “caught up in a lot of drama,” while Nate is turned off by partners who are superficial and focus on “things that honestly just don’t matter.”

Whether or not Nayte is Michelle’s Bachelorette winner, she’s happy about how her season ended. “What I tried to do is just enjoy every minute, positive, negative, all of it so that when I got to the end, I would be happy with how I handled the situations and I would hopefully have what I’m looking for,” she told The Hollywood Reporter. “But I love where I’m at, I am excited for everyone to see everything unfold and the whole entire journey, the good part, the hard parts. I’m just excited for things to kick off.”