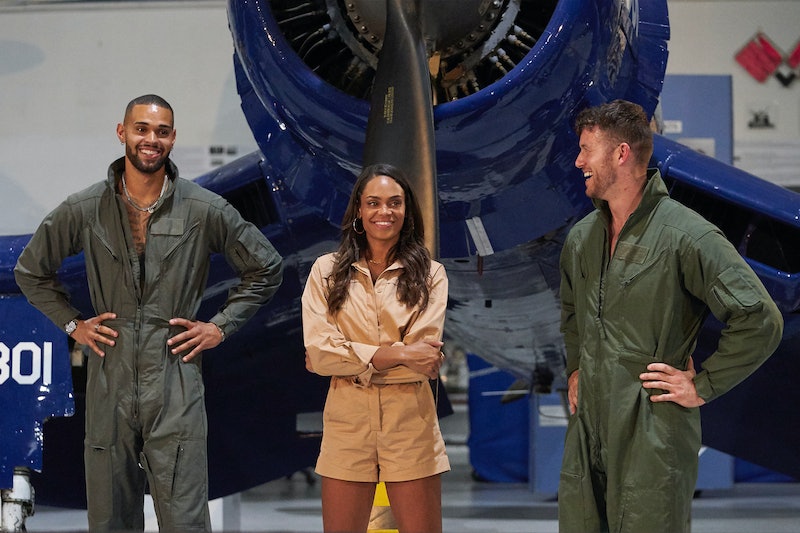 Class is in session on Season 18 of The Bachelorette, and teacher Michelle Young definitely has some grade-A contestants. Among them is frontrunner Nayte Olukoya, a “6-foot, 8-inch Adonis of a man” who has “a smile that sparkles like the stars,” according to his ABC bio. The 27-year-old is also described as “the life of the party” who is “focused on finding a long-lasting relationship that will go the distance.” Nayte is originally from Winnipeg, Manitoba, Canada, but currently lives and works in Austin, Texas. Coincidentally, he used to volunteer as a teacher’s aide, but beyond that, he and Michelle come from very different backgrounds.

“She’s this crazy family-oriented person. She has that perfect example from her parents, and I guess I didn’t really have that,” Nayte said on a recent episode of the Bachelor Happy Hour podcast. “It was a little intimidating.”

But Nayte isn’t one to let nerves take over, and on night one, he scored the first kiss and the first impression rose. “That first kiss, I was not expecting that,” he said, adding that he’s never been smooth enough to pull off the perfect first kiss. And while their first night was great, Nayte set himself up for an even better season. “The connection was just like, I never had sparks fly, and it sounds all weird to say, but we had that initial connection. It was definitely sparks.”

Will Nayte and Michelle’s sparks turn into fireworks by the end of the season? Here’s everything to know about Nayte, so far.

Nayte studied at Eastern Washington University, graduating in 2019 with a BA in Business Administration and Minor in Africana Studies. According to his LinkedIn, he started working as an account executive at Indeed after graduation, and he was promoted to senior account executive in January 2021. Prior to that, he was a bartender and an AT&T sales rep through college.

He’s also done some volunteer work, including a 10-month stint as a teacher’s aide in Omaha Public Schools in Nebraska in 2014 and 2015. Fingers crossed that shared passion for working with children will be one of the things that brings him and Michelle closer together.

Nayte’s Instagram page (@KingBabatunde) is full of pictures of his English Cocker Spaniel puppy, which he adopted in April 2021. “I wasn’t hiding my kid from the world — I was hiding the world from my kid,” he said jokingly in a post about the dog. “His name is Percy ... 10/10 recommend.” Nayte continues to share adorable photos of the growing pup, including a video that featured Percy playfully biting him while the two were playing together.

Nayte Wants “A Teammate For Life”

Nayte “doesn’t have trouble meeting women,” but as he gets older he’s become “more focused on finding a long-lasting relationship that will go the distance,” per his ABC bio. He described his dream woman as someone who will be his “teammate for life” and who is “outgoing,” “spontaneous,” and “has enough swagger of her own to keep up with him.”

In a clip for The Bachelorette’s Instagram, he said his biggest relationship red flags were someone who was “too superficial” and spent time focusing on “things that honestly just don’t matter.”

He Likes to Travel

When he’s not posting photos of his dog, Nayte’s Instagram is also filled with images of him traveling to the Grand Canyon as well as spots in New Orleans, Vancouver, and West Hollywood. His ABC bio states that he “dreams of visiting the Taj Mahal” one day.

Nayte apparently “can’t dance to save his life,” based on the ABC bio.

That statement is one that former Bachelorettes and hosts Tayshia Adams and Kaitlyn Bristowe can personally attest to. “We did witness [his dancing] ... ” Adams hedged while on Instagram Live. Bristowe added: “Dancing with the Stars is not in his future.”

Nayte Is A Prolific Reader

Nayte is an avid reader who, in addition to using Eckhart Tolle quotes as captions for his Instagram posts, often shares photos of the books that he’s reading. He also has a ton of recommendations. For example, when people were forced to stay inside in March 2020, he uploaded an image of a stack of books that he said had all left an impression on him for others to try reading.

He also revealed that he would spend his time during lockdown reading: “Trying to grow as much emotionally and mentally, as well as professionally,” he wrote. “A lot of people have asked me which books I’ve been reading or asking for recommendations based on the few posts I’ve put out on my stories. Here are the books that have impacted me the most over the last ~6 months. Books that have helped me the most in my personal growth and development while trying to figure out this new chapter in life.”

More like this
Who Is Pete Davidson Dating? He "Courted" Emily Ratajkowski At A Knicks Game
By Jake Viswanath
Chrishell Stause Claims The PCAs Stopped Her From Bringing Her Partner G Flip
By Jake Viswanath
Robert Brotherton's Boyfriend Ra'ed Saade Competed On Several Reality Shows
By Brad Witter
Larsa Pippen Is Reportedly Dating The Son Of A Legendary NBA Player
By Jake Viswanath
Get Even More From Bustle — Sign Up For The Newsletter