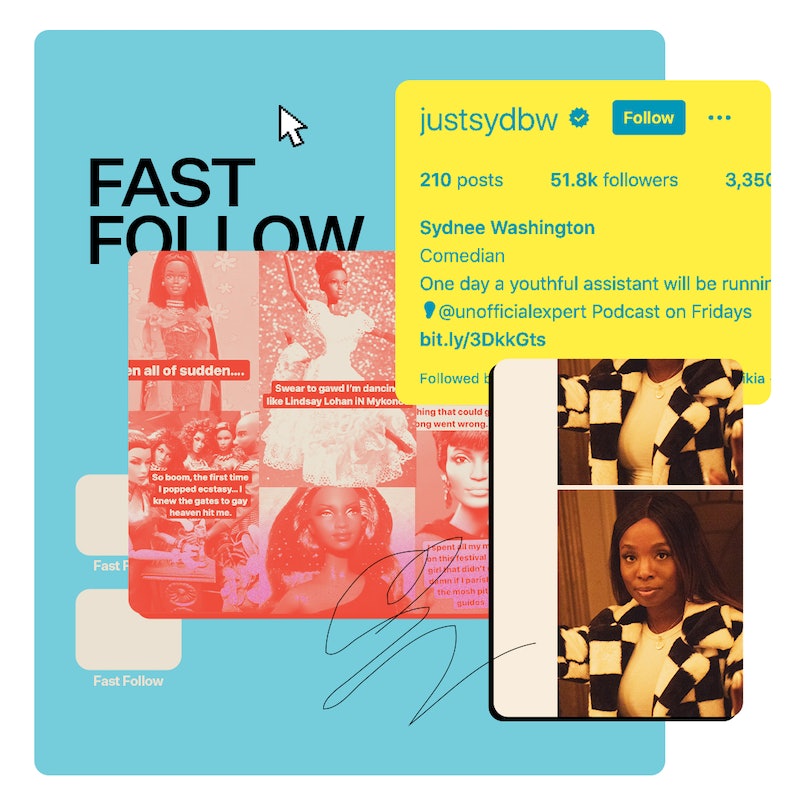 Sydnee Washington was always the funniest girl at the club. Working as a bottle girl at a high-end cocktail lounge in New York City, she’d banter with her colleagues and customers, entertaining them with her stories. One day, a work friend offered to film several of Washington’s “bits,” splicing them together into a reel, and she’s been doing standup comedy ever since. Though Washington often mines her time in hospitality for material — as she did in her 2018 one-woman show Death of a Bottle Girl — it’s her outlandish Instagram Story series Black Barbie, which features Zola-level debauchery and storytelling twists, that provides the most entertaining vehicle yet for her escapades.

The series, in which Washington pairs photos of Black Barbie dolls with captions detailing her messiest nightlife experiences from the early 2010s, started when she discovered a strange treasure trove of images of Black Barbies online. “I was googling ‘Black Barbie dancing,’ ‘Black Barbie wasted,’ ‘Black Barbie at the club’ and there it would be,” Washington tells Bustle. “I actually have images saved of the clubs that I worked at so I'll use them as a background for ‘Black Barbie in a dress’ and then I'll set up the scenario with my captions.”

While Washington’s main character shenanigans are enough to have followers waiting impatiently for her next Story — recent ones include the time she was fired from the now-closed dance club Riff Raff’s, and when she voluntarily roofied herself — a bevy of celebrity cameos color the sidelines of her tales without upstaging her own antics. “The fact that I was able to serve Jay-Z and Beyoncé before they are who they are now,” Washington says of just two of the A-listers who are referenced in her Stories. (Washington generally avoids naming big stars on Instagram, instead describing them “blind item” style.) “When [famous people] come out with books and things of that sort, I'm like, “Wow. I was actually there that night." Not only was she there, but at least when it comes to her Instagram Stories, Washington has made herself the real star.

Below, Washington talks wikiFeet, cat memes, and meeting her girlfriend on Instagram.

Myself. I checked my own Wikipedia and I saw people are adding things about me. I was like, "Oh wow, I'm honored. Thank you for putting this stuff in about me." Not everything [was accurate] but at this point, does it matter? You're just happy that somebody thinks you're important enough to make a whole page about.

Have you seen anything great on the internet this week?

I'm really into The Dodo. It's videos of like rehabilitated animals: there's beavers, bumblebees, dogs, cats, kangaroos. Then I got into the comments and somehow I clicked on someone's page and they just have all these memes of cats during Zooms. There was this one cat [who’s] ass is basically right in the camera. The person [in the meme] is looking horrified, but I'm sure it was really funny for the meeting. The cat was truly showing his butthole and it was probably like 9:00 a.m.

Is there something special you’ve purchased on the internet recently?

I'm on the verge of getting this speaker that looks like a lamp. I'm a light head. I want [my bedroom] to look like a little dungeon that's also a nightclub, that's also a sex palace. So I love lights and the speaker lights up. Whenever you're playing a song, the lights will change a color. [I’m sober so] I can't do Molly, but I need to be as if I am doing Molly, and these lights do that for me.

Someone messaged me and they were like, "You keep saying that your feet are ugly, but I've seen your feet on wikiFeet, and it's not that bad. Can you just please send me a picture of your feet, what they look like right now?" I was like "For free? You’re trying to pull up in my DMs to get free toes?” People are making good money off of their little pinky toes. I don't need you to be getting pro bono work from me, no.

I think I would marry Instagram because all of the best things that have happened to me have been with Instagram. I would f*ck TikTok because it's just a wild, chaotic app that people put a lot of time and effort into it.

What's the best thing that's ever happened to you on Instagram?

My girlfriend and I met through Instagram. My friend, Laci Mosley, has a podcast. She posted about my girlfriend [appearing] on the podcast, and I wrote a comment. The love your life can be in the comments, so you better check them.

More like this
Annie Rauwerda Finds Treasure In The Depths Of Wikipedia
By Chloe Foussianes
How To Curl Your Hair With Leggings, According To TikTok
By Carolyn Steber
Ashamed Of Your Screen Time Stats? Here's How To Change That
By Alexis Morillo
Learning To Love, Not Judge, The Lunchbox Wives Of TikTok
By Esther Zuckerman
Get Even More From Bustle — Sign Up For The Newsletter
From hair trends to relationship advice, our daily newsletter has everything you need to sound like a person who’s on TikTok, even if you aren’t.