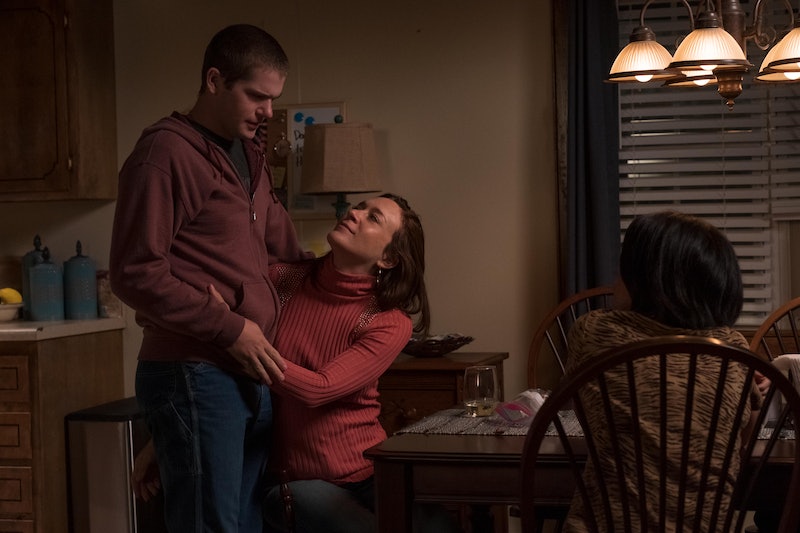 Almost eight years after Massachusetts teen Conrad Roy III tragically died by suicide, his parents are preparing for Hulu’s The Girl From Plainville to put his story — known as the texting-suicide case — back into the spotlight. Roy’s mom, Lynn St. Denis, recently told People she hasn’t seen the limited series, but expressed concern about its focus on her late son’s then-17-year-old girlfriend Michelle Carter (played by Elle Fanning). “There may be an attempt to defend some of [Carter’s] needless and evil actions,” St. Denis, who’s played by Chloë Sevigny, said.

Following Roy’s death, Carter was charged with involuntary manslaughter for allegedly encouraging Roy to die by suicide in dozens of text messages and calls — including one in which she instructed the 18-year-old to carry out his plan after he got scared and wanted to back out. Both St. Denis and her ex-husband, Conrad Roy Jr., who separated when their son was about 16, took the stand at Carter’s 2017 trial. Roy Jr. claimed that Carter had “exploited [his] son’s weaknesses and used him as a pawn” for her own interests. Ultimately, Carter was convicted and sentenced to 15 months in prison. However, she only served 12 months before being released from Bristol County jail in January 2020 on good behavior.

The Hulu series will surely bring attention back to the case, but St. Denis noted that could be beneficial. She pointed to her efforts to pass “Conrad’s Law,” a proposed bill that aims to make Massachusetts the 43rd state to criminalize suicide coercion — or pressuring another person to die by suicide — and make the crime punishable by up to five years in prison. “There were people screaming, ‘She should get 20 years, she should get life, she should die,’” St. Denis told People of Carter, noting that she only went to court when she “absolutely had” to do so. “I wasn't the typical mother screaming on the news channel, ‘I want justice.’ Even if I showed up every day, or I didn’t show up at all, it wouldn’t have mattered. I just knew that it was in God’s hands, and it was in the law’s hands.”

St. Denis hopes the proposed law will act as a deterrent for people like Carter, explaining that her son “would want” her to help other families. “If we get the law passed — when we do — that’s going to be a win for me, for him,” St. Denis said. “I just want my son to be proud of me.” (As of March 2022, Conrad’s Law, which was first introduced in 2019, had been stalled with the Massachusetts Senate Rules Committee for more than two years.) St. Denis also wants to write a book someday and has considered working as an advocate for the American Foundation for Suicide Prevention.

In August 2018, St. Denis filed a $4.2 million wrongful death lawsuit against Carter claiming that she’d caused her son to suffer “severe personal injuries, great conscious pain, and suffering of body and mind and ultimately death.” St. Denis’ attorney, Eric Goldman, explained to MassLive at the time that the goal was to establish a memorial for Conrad rather than to profit financially. By April 2019, however, Goldman confirmed to the Boston Herald that the suit had been “resolved,” but declined to comment further on the case’s dismissal.

Roy’s father, who ran the 2018 Boston Marathon for suicide awareness in his son’s honor, also envisions Conrad’s Law as being more of a deterrent than a punishment. “I don’t really want to see anyone struggle,” the marine towing and salvage business owner told People. “I don’t want parents to have to go through this. If the law is out there, it might make somebody think twice about making someone take their life, knowing that it’s against the law. Maybe it might help save one life, or help one family out, and be worth it.”