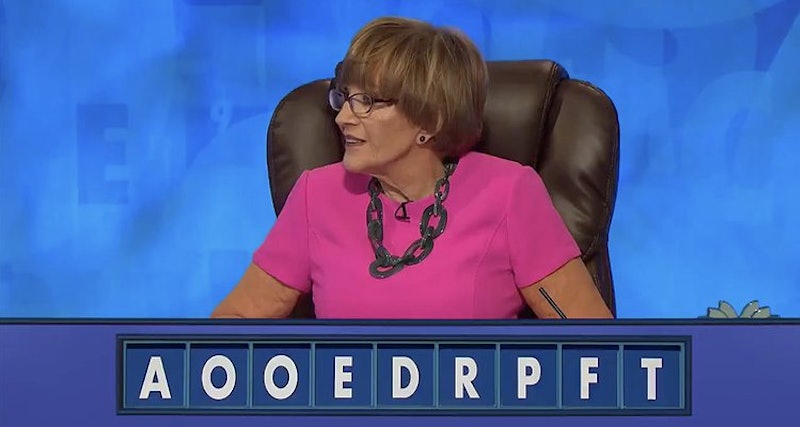 Following the show on August 16, Channel 4 has been forced to apologise for airing a homophobic slur during Countdown. After being presented with the letters “A, O, O, E, D, R, P, F, T”, one contestant started to laugh and said the seven-letter word he’d come up with was “p*****r.” Viewers expressed shock on social media that the scene hadn’t been edited out and at the lack of reaction from host Anne Robinson and Susie Dent.

During the round contestant, Matthew Gould said, “I've got a rude word that I know is in the dictionary, ‘P*****r.’” There was little reaction to his suggestion, which was swiftly followed by his opponent offering “Proofed.”

Speaking about the segment later on Twitter, Gould said, “I apologise for my part in this. I thought it might be edited differently. At the time I said ‘I have an inappropriate seven that I know is in the dictionary or a riskier seven that I’m less sure about.’ I thought that bit would be reshot with a non-offensive seven letter word.”

A representative from Countdown told Yahoo! Entertainment, “The airing of the word was an error of judgement. It does not align with our values and we apologise for any offence caused.”

However, fans have questioned the circumstances in which the show thought it was appropriate to air a homophobic slur. One person said, “What other minority would have a highly offensive smear against them broadcast on afternoon television for light entertainment?”

Entertainment journalist Scott Bryan said, “Sorry to go serious on something quite trivial – but as someone who was called a ‘p******r’ by homophobes on a daily basis why on earth is Countdown allowing it to be said cheerfully as an answer on daytime television?”

The best-selling author Adam Kay replied, “I don't think it's trivial. If the best word someone could come up with is a word in the dictionary that would have the channel taken off the air, I'm sure they'd replay the round. Not sure this should be treated as any different.”