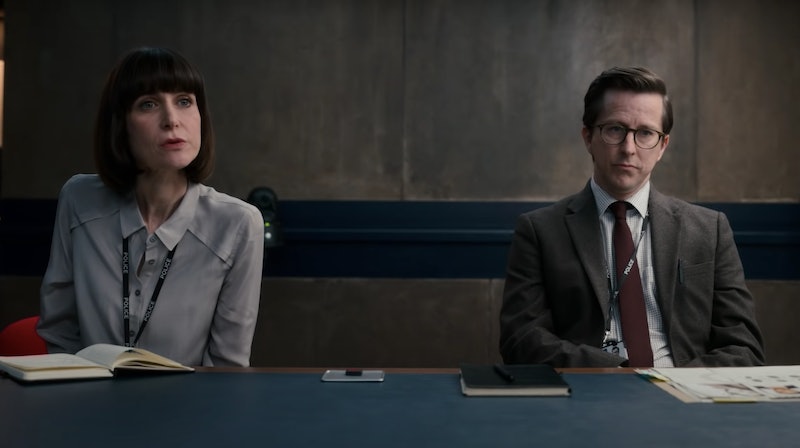 Taking place entirely in an interrogation and adjoining observation room, Netflix's Criminal gave viewers the opportunity to become an amateur detective and decide whether suspects were innocent or guilty. Now returning for a second series, here's everything you need to know about Criminal season 2.

When Is 'Criminal' Season 2 Coming Out?

Season two will be available to stream from Sep. 16, per Radio Times. In a statement made by the streaming service, they announced it'll feature "four new cases, four new suspects, and one room that changes everything." This is opposed to the three episodes in the first series, which featured David Tennant, Hayley Atwell, and Youssef Kerkour as suspects.

"Prepare for bold stories, some surprises, and a completely innovative take on the police procedural," Netflix writes.

Who's Starring In The Second Series?

The trailer for Criminal season two seems to reveal that there's been no change to the police unit. In terms of new suspects, however, there's a whole new line up to get excited about. Four a-star actors will be stepping into the interrogation room: Game Of Thrones OG Kit Harington, The Big Bang Theory's Kunal Nayyar, creator and star of Catastrophe Sharon Horgan, and acting legend Sophie Okonedo.. This star-studded cast is bound to deliver all the high drama and edge-of-your-seat tension we've come to expect from Criminal because, by the looks of the trailer, they all have something major to hide.

Speaking about the process of finding talent to work on Criminal, creator and director Jim Field Smith told Digital Spy: "We were able to attract the right talent here not just because of the strength of the scripts, but because these opportunities don't come along very often. As filmmakers, as actors, you're in a really intense setting, not bouncing around all over the place," he explained.

"I think that's why the actors enjoyed the experience of making it because it's as close to a pure acting experience as you get. Normally on a TV drama, you're breaking across multiple days — this was closest to a theatrical play experience."

Will It Be Split Across Different Countries?

At the moment, it seems that the UK is the only country officially getting a second season. I've reached out to a Netflix rep to get more info on this, but have yet to hear back. But as Bustle previously reported, there's always the chance that the stories featured could take place in "other popular Netflix markets, such as the United States, Japan, India, or Brazil.

This article was originally published on Aug. 25, 2020