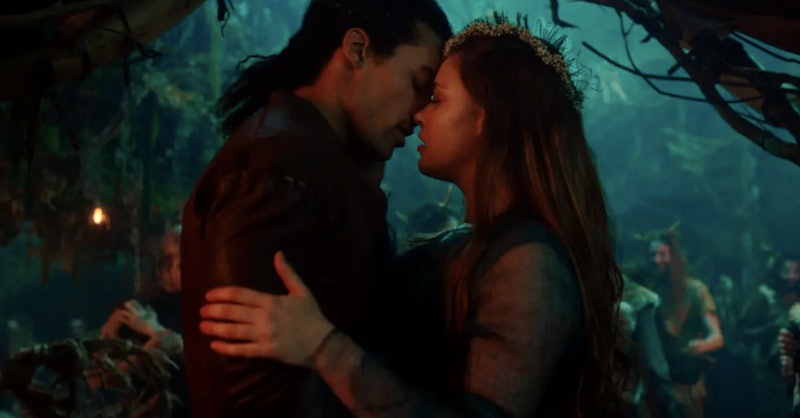 Spoilers for the Cursed graphic novel, ahead. Netflix subscribers can finally get a taste of Cursed, a feminist retelling of Arthurian legend, based on Thomas Wheeler's 2019 YA novel of the same name. Viewers wondering how Nimue's story will conclude should know that the Cursed book ending leaves you to deal with a major cliffhanger.

Written by Thomas Wheeler and illustrated by Frank Miller, Cursed reframes King Arthur's story by focusing on Nimue: a young Fey woman, born with incredible power, who finds herself tasked with bringing the Sword of Power to its rightful owner. The sword is supposed to belong to the ruler who will unite the humans and Fey of England — who are currently locked in a deadly war against the Red Paladin zealots who seek to destroy every last Fey in existence. In the old stories, Nimue, aka the Lady of the Lake, was the sorceress who gave King Arthur the sword Excalibur. In Wheeler's retelling, however, it may be Nimue herself who is destined to rule over England.

As Cursed comes to an end, Nimue finds herself fighting alongside the Fey in a war against the evil Father Carden and his Red Paladins. As she attempts to flee with Morgan and Merlin, Nimue turns back to rescue Arthur, who is locked in a fight against seafaring invaders. That hesitation is all her enemies need. Nimue takes an arrow to the back, drops the Sword of Power, and falls off of a bridge into the river below. Merlin wields the sword to give himself and Morgan an opening, before the two of them disappear with the ancient weapon.

In the water, Nimue vows to protect the Sword of Power "until a true king rises to claim it." Instead of dying in the depths, however, she soon washes ashore, where she's kidnapped by lepers — ostensibly in service to Rugen, the Leper King — who take her into their tunnels as Cursed comes to a close. Rugen plays a minor role in the novel's previous events, serving largely as a target for Merlin's deceit and as a potential rival to Uther Pendragon's rule. Merlin made the mistake of promising the Sword of Power to Rugen, however, and the old wizard's lies may have gotten Nimue in a boatload of trouble.

The good news is that Wheeler and Miller have plans for a Cursed sequel. Wheeler tells Bustle that the two Cursed creators had been hard at work on the set of the Netflix series, fleshing out a follow-up to Nimue's first adventure.

"One of the real thrills of this process was sitting with Frank Miller on the set of Cursed last summer and starting to drill down into the details of the storylines for a potential [sequel] and beyond," he says. Although he can't say for sure whether Nimue will return to both the page and the screen, Wheeler reveals that "her story will continue absolutely."