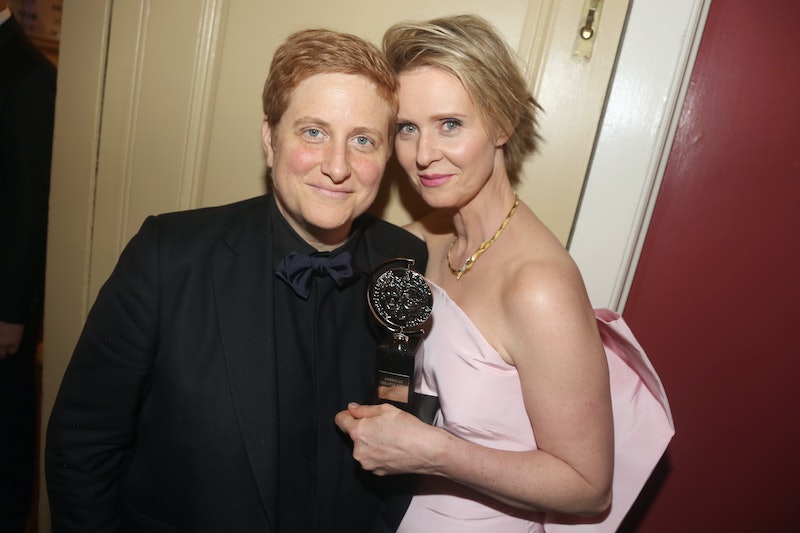 Sex and the City star Cynthia Nixon has been in a relationship with her now-wife Christine Marinoni since 2004. The two met while doing education advocacy work on behalf of New York City public schoolchildren, and were close friends before starting a romantic relationship. Nixon had previously dated men — she shares two children with photographer Danny Mozes — but said in a 2010 interview that Marinoni was “undeniable.”

“I love her sexuality — it’s a big part of what I love about her — but I feel like it was her,” Nixon, who identifies as queer, told the Advocate. “It wasn’t something in me that was waiting to come out. It was like … How can I let this person walk by?”

Look back at the couple’s relationship below.

Nixon met Marinoni in 2001 while working with the Alliance for Quality Education, an education non-profit that Marinoni founded. Nixon was helping with a campaign to reduce class sizes in the New York City public school system — which Nixon’s first two children, Samuel (who goes by Seph) and Charles, were then enrolled in. At the time, Nixon was still with Mozes, and her friendship with Marinoni grew and deepened during the two’s eventual split in 2003.

Nixon and Marinoni haven’t specified exactly when their relationship turned from friends to more than friends, but the two started dating sometime before the summer of 2004. Before her relationship with Marinoni, Nixon had never dated a woman. “When we started seeing each other, Christine kept waiting for the other shoe to drop, for me to panic about what this would mean – to my career or to myself – as if somehow I just hadn’t noticed that she was a woman,” Nixon told the Radio Times. “And then she met my mother and that was when she stopped worrying about it.”

When rumors about Nixon’s dating life began circulating in late 2004, her publicist discouraged her from ever coming out publicly. “He just kept saying, ‘It’s your life, and it’s private, and that’s it,” Nixon told the Advocate. “And we kept asking, ‘That’s the whole thing? We never move past that? We’re at the playground with the kids, and pictures are taken of us, and we say, ‘No, she’s my friend?’”

Unsurprisingly, Nixon didn’t stay with that publicist long. Her manager introduced her to Kelly Bush, an openly gay publicist, who suggested that Nixon just confirm the rumors. “And I was like, ‘Really, we can just confirm?’ So that’s what we did. It was so fantastic,” Nixon continued.

Nixon and Marinoni announced their engagement at a New York rally for gay marriage in May 2009, with Nixon saying “it’s time already.” Though same-sex marriage was already legal in a handful of states (including Massachusetts, California, and Connecticut), Nixon said that she and Marinoni were planning to wait to tie the knot until it was legalized in New York state.

In 2011, Nixon and Marinoni welcomed a son, Max Ellington Nixon-Marinoni. After he was born, Marinoni took a break from working to be a stay-at-home mom, raising Max and his two older siblings.

“I couldn’t actually envision being happily married with kids,” Marinoni told the New York Times in 2018. “I thought, I’m never going to get that. I think it’s amazing that I got that. It’s huge.”

A year after same-sex marriage was legalized in New York, Nixon and Marinoni wed on a New York City rooftop in May 2012. The couple kept many of the details of their ceremony private, but did release a photo to People.

More like this
Gemma Atkinson & Gorka Márquez Are Strictly The Sweetest Couple
By El Hunt
Linda Ronstadt’s “Long Long Time” Plays A Pivotal Role In The Last Of Us
By Brad Witter
Michael B. Jordan Tackled His "Public Breakup" With Lori Harvey On 'SNL'
By Brad Witter
Here’s What Happens To Bill & Frank In 'The Last Of Us' Video Game
By Brad Witter
Get Even More From Bustle — Sign Up For The Newsletter
From hair trends to relationship advice, our daily newsletter has everything you need to sound like a person who’s on TikTok, even if you aren’t.