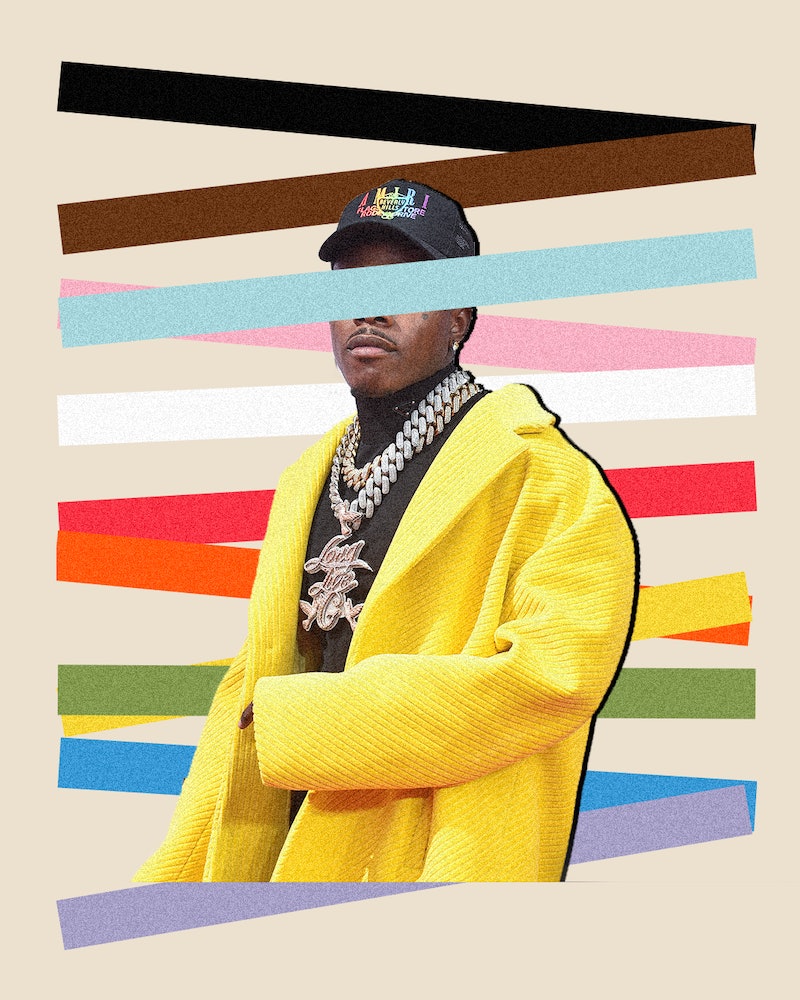 The DaBaby to DaBadGuy pipeline continues. After the Charlotte rapper spewed queerphobic vitriol at a Miami music festival last month — including making false, dangerous comments about the LGBTQIA+ community and folks living with HIV — other festivals have dropped him from their lineups. He was uninvited from Lollapalooza and off lineups at IHeartRadio Music Festival and Austin City Limits Music Festival. On Aug. 2, he released an apology, which read like it’d been generated by a PR team. It was removed from his social media accounts shortly after.

But beneath all the obvious queerphobia lies another issue. In his latest music video, he used a well-known Black, queer phrase (“It’s giving what it’s supposed to give”) and rainbow-colored lettering, while using that same video to perpetuate homophobia and serophobia, which is the fear of those living with HIV. He’s appropriating the parts of queer culture that serve him yet still allowing anti-queer violence.

Around the time of DaBaby’s incendiary rant, Twitter user @VONDUPPY01 posted about how the entertainment industry has helped reimagine what’s deemed “masculine” and what presentations of the cishet male identity are socially acceptable. (The tongue-in-cheek tweet parodies a 2019 tweet written by Jatella Jordan.) Rather than honoring and protecting actual queer folk, masculinity is now queer-coded — and DaBaby is a culprit of this.

“What we are seeing is that our assailants, [who are] active participants in anti-queer animus, can wear clothes like ours and still want us dead,” Jordan tells Bustle.

Content creator Brandon Stewart tracks rainbow-washing back to the 20th century. “People like David Bowie and Mick Jagger were able to straddle the lines of masculinity and queer aesthetics,” they say in a phone call with Bustle. (Jagger did not refer to himself as gay or as part of the LGBTQIA+ community, and Bowie backtracked on a 1972 magazine interview calling himself gay.) “These were the same people that were praised for this expression, but singers like Jackie Shane were demonized for being a Black woman of trans experience.”

Many artists who queer-code aren’t as blatantly homophobic as DaBaby, but they’re still not doing anything to support queer communities. “These artists want to take up space and take it away from those who live the lives they only want to replicate when it’s convenient and in style,” says Adonis BC Okonkwo, a DJ and performance artist. “Young Thug, for example, wore a dress on his album cover. He received praise for such. Even this very week, he was receiving praise for having pink hair. But he’s done [little to nothing] for the gay community.”

The music industry is notorious for promoting these behaviors, but the rainbow-washing of the straight male identity extends across the entertainment industry, from TikTok trends to Tyler Perry’s affinity to drag. On TikTok, the emergence of the “Femboy” and MaidTok aesthetics seems to challenge gender norms by featuring men in tennis skirts or fishnet stockings. But Okonkwo is skeptical. “The amount of cis men I see co-opting queer language and aesthetics so they have access to [nonmen] and people they [are sexually attracted to] is annoying,” he says. “These are the same men who are very flimsy when it comes to checking other men on misogyny, boundaries, and homophobia and transphobia.”

Therein lies the problem. Pink hair and rainbow letters will not stop queerphobia or dismantle gender norms. All it does is fuel a system that consumes and copies traits inherent to marginalized identities for the benefit of cishet folk. People in the LGBTQIA+ community don’t reap any benefits.

DaBaby and his homophobic cronies may feel like his apology would be DaEnd of this conversation, but he and the internet have a long way to go. As Stewart says, “In order to be in community with us, cishet people must release themselves from the shackles of queer performativity and do the work to create safer and equitable spaces where queer and trans folk can thrive.”

Correction: A previous version of this story mischaracterized how David Bowie defined his sexuality. It was been updated to clarify his relationship with the LGBTQIA+ community.