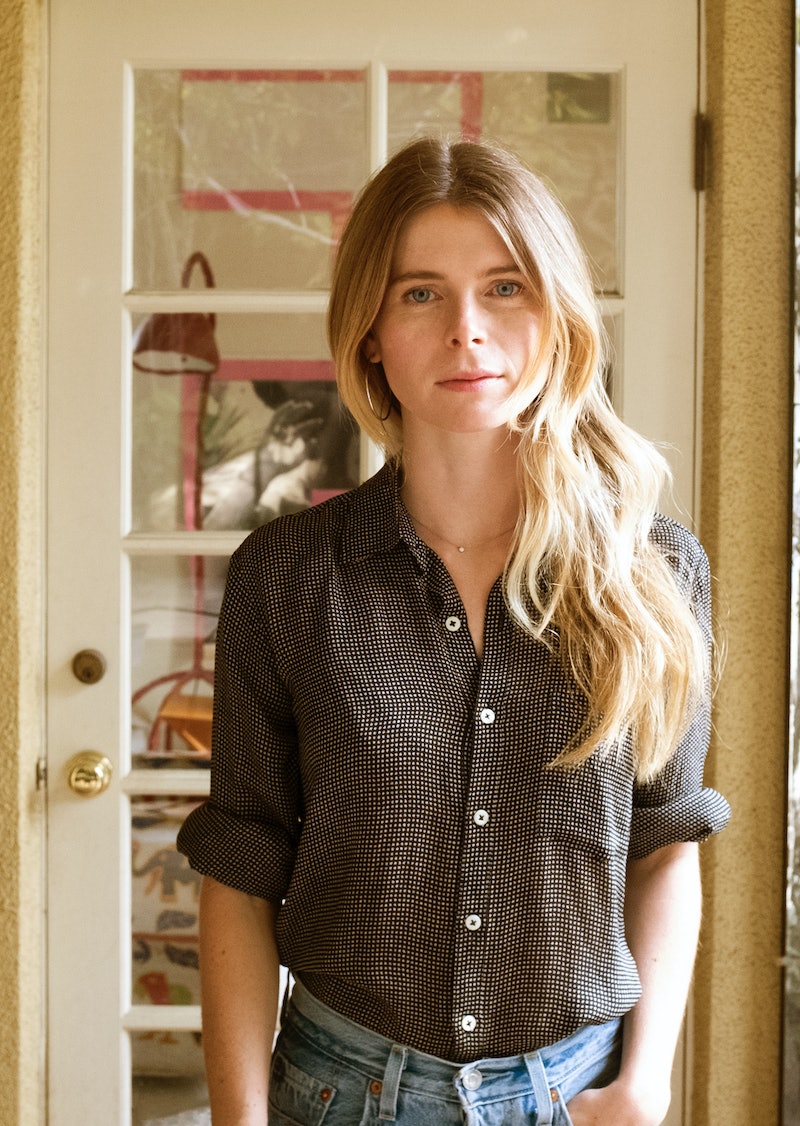 When Emma Cline was 13, she became pen pals with a 55-year-old DJ named Rodney Bingenheimer. They met on a sidewalk in her hometown of Sonoma, California, and after he declared that she looked like his “first love,” the two exchanged mailing addresses. Cline went on to write about the experience in a 2014 essay for The Paris Review called “See Me” — and she’s been exploring these types of fraught power dynamics in her fiction ever since. “Just being a woman growing up in this time and culture, it’s the water that you swim in,” Cline tells Bustle. “I also have four younger sisters who are very close in age. So having this compacted, vivid female adolescent experience really underscored a lot of these dynamics and issues.”

Cline received national acclaim for her New York Times bestselling debut novel The Girls, which flipped the script on traditional Charles Manson stories — instead focusing on the women of the cult. (Full disclosure: I worked at Random House on The Girls' publicity campaign as an assistant in 2016.) And the way that she wrote about her fictionalized version of Manson was not unlike her treatment of Bingenheimer in her Paris Review essay. Not so much an indictment of the villainous figure, but rather a vehicle to hold up a magnifying glass to young women’s deep desire to be seen — really, truly seen — and the ways men exploit that impulse for their own gain. It’s the same dynamic that’s at the heart of Daddy, her latest short story collection. But unlike her previous works, in Daddy Cline predominantly writes from the perspective of the predators instead of their prey, be it a father with a violent past or a disgraced magazine editor.

For Cline, the motivation to occupy these sinister headspaces is a simple one: “There’s something appealing about writing the stories of bad men, controlling the narrative instead of being subjected to it.” Below, she discusses the #MeToo movement, reading men's rights subreddits, and her beliefs on empathy.

The Girls was released two years before the #MeToo movement was ignited. But what’s so prescient about the novel is that unlike other works relating to Manson, you painted the women in his orbit as victims, not villains. What inspired you to spotlight the power abuses at play?

I was trying to gather my thoughts about why the Manson girls had this pull [to Charles]. I think it was to be seen. Society limits the options for a lot of women, or [boils their] narratives down to these romance narratives, or narratives where you have to exist in relation to men and what that can engender.

I remember in a few interviews people would be like, "You're talking about this dynamic that was present in 1969. How do you think things have changed for women?" They would talk about it as historical fiction, like a document from a time that we're far removed from now in terms of how we operate. I can't remember which interview this was exactly, but I remember someone kind of implying, "Oh, isn't this a little bit extreme? You've set up this dynamic for this character where all her interactions with men are so loaded, they have this sinister element. Isn't that being a little bit hysterical?" But to me it never seemed that way.

With Daddy you’re focusing on the Manson types of the present day — the men who prey on women instead of the women themselves. Why did you want to explore the other side of the coin?

I started writing [the stories] 10 or 11 years ago. But I definitely noticed in the last four or five years that they’ve started to have this tilt that's more like what you're talking about, a shift in their consciousness. I think there's some element of it that's not a conscious choice. Then "daddy" seemed like a word that's so loaded. It has this very innocent use but then there's also this darker meaning. Something about that word seemed to encapsulate the world of these stories. Even the stories from the point of view of women occupy [a world] that is often delineated by these male figures.

“There’s something appealing about writing the stories of bad men, controlling the narrative instead of being subjected to it.”

You’ve spoken about how as a culture we spend so much time considering the inner lives of men who would never do the same for women. What made you want to give them a collection’s worth of consideration?

It's something that the culture has forced upon us anyway. Just the amount of time and energy people spend trying to understand what is going on in Trump's mind. Or when you read these Me Too stories where an entire workplace had to translate the actions of this one man. The amount of fallout from one person's interiority and moral compass is interesting to me. With Harvey [Weinstein] for example, there was this intense focus on him as this villain. I think news stories by necessity have to kind of flatten people into archetypes just because they're telling us what happened. It's not the place for exploring their motivations. But what I think is more frightening than them just being a cartoon villain is that there's someone who probably thinks of themselves as a good person.

What inspirations did you draw on to get into these men’s headspaces?

There's a book called Into That Darkness by Gitta Sereny where she interviewed Franz Stangl, a commander of a concentration camp, when he was in jail leading up to his trial. It was just so fascinating because in no way is she minimizing what he's done. But [she] shows that these people consider themselves victims, and how they justify [their actions] to themselves, their self narrative. It's always interesting for me to drop into a world that I don't agree with or a mindset I don't like. I checked out The Game from the library, the pick-up artist book. Just reading that or reading men's rights subreddits and trying to figure out, what is the logic here? In what ways do people end up in the place they do?

Were you just knee deep in Incel culture writing this?

I don't want to overstate it. I didn't spend a lot of time [on Reddit]. I was visiting for a minute and seeing the self pity, the self justification. I think every person has a set of organizing principles for how they see the world and it's always interesting to me to imagine what those principles might look like for someone else.

How has this collection challenged your notions of empathy?

Empathy is always a funny word to me and I feel like empathy in fiction is somewhat like an overrated concept. I think I'm presenting a consciousness without endorsing it. Wherever empathy would come in would be [in that] I need to write this person not as a cartoon. It needs to be a person who has their full human consciousness, or else it would be false.