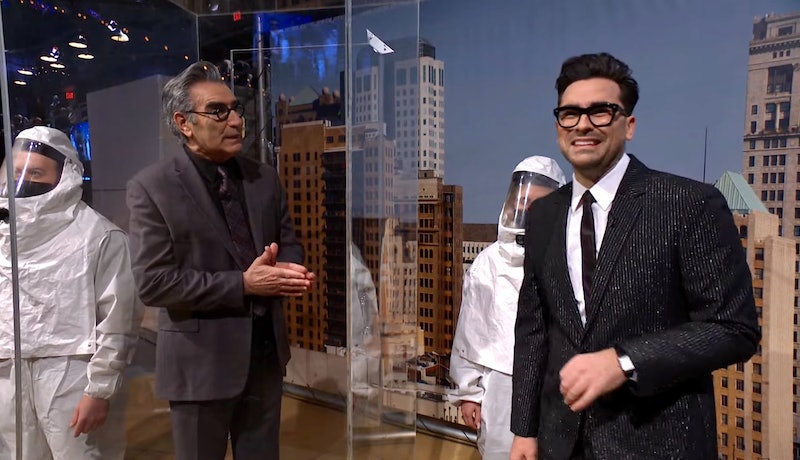 As if anyone needed more proof that their family is simply the best, Dan Levy's dad Eugene Levy crashed his SNL monologue during the Feb. 6 episode. Due to coronavirus protocols, however, it wasn't quite the reunion you'd expect. "I flew in to wish you luck tonight, but because I traveled, I'm now in this isolation box," Eugene joked after his son stumbled upon him in a Plexiglass enclosure while giving viewers a backstage tour of Studio 8H amid his first-time hosting gig.

"You came all this way just to watch the show from a weird box?" Dan asked, adding that he'd offer to help "but we're live on TV." After the elder Levy assured his son he had "enough on [his] plate tonight," Dan exclaimed, "Fresh from a plane from Los Angeles, Eugene Levy, everybody!"

Elsewhere in his monologue, Dan reflected on their co-starring roles in Schitt's Creek, a series he said had made the past year "beyond a dream come true" even though the nine Emmys they won "were quite literally thrown at us by a stranger in a hazmat suit."

Dan went on to describe how, with all the attention the PopTV and CBC comedy has gotten recently, he's been recognized on the street much more frequently. The downside? He now has strangers screaming "ew" at him, a nod to the show's oft-quoted "Ew, David!" line that he said will now haunt him for the rest of his life.

Eugene also wasn't the only Levy cheering Dan on from the sidelines. Dan's mother Deborah Divine had a pre-show message for "the bully punks at Camp WTF who made life miserable for a certain cabin-mate back in [the] summer of ‘96 - just because he was different." In a tweet posted earlier the same day, she wrote, "I have just 7 words to say to you: 'Live from New York, it's Saturday Night!'"

More like this
The Black Lotus Staff Has "Had Enough" In The 'White Lotus' Spoof From 'SNL'
By Brad Witter
Michael B. Jordan Tackled His "Public Breakup" With Lori Harvey On 'SNL'
By Brad Witter
Pedro Pascal Barely Got Through The "Lisa From Temecula" 'SNL' Sketch
By Stephanie Topacio Long
Who Is Pete Davidson Dating? He & Chase Sui Wonders Got Caught Kissing
By Jake Viswanath
Get Even More From Bustle — Sign Up For The Newsletter
From hair trends to relationship advice, our daily newsletter has everything you need to sound like a person who’s on TikTok, even if you aren’t.