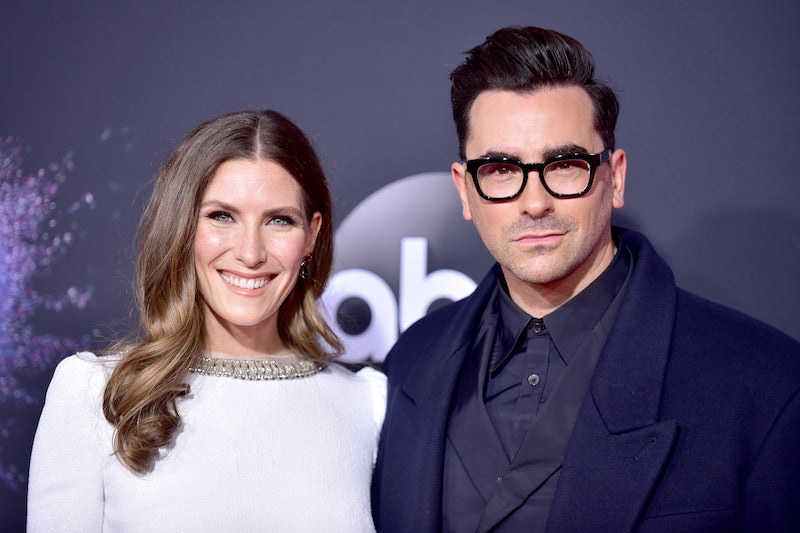 Anyone watching the 2020 Emmys may have thought that nobody was more excited about Schitt's Creek's sweep than show creator, writer, and actor Dan Levy — but that's only because his sister, Sarah Levy, was watching from home. Levy was absolutely beaming as his castmates accepted their awards one by one, but it didn't compare to Sarah, aka millionaire waitress icon Twyla Sands, and her screams of joy. In fact, Dan Levy's sister's reaction to the Schitt's Creek Emmy wins were almost better than the actual acceptance speeches — and the cast's many speeches were pure joy.

The show made history at the Emmys, sweeping the comedy categories and taking home a record-breaking nine awards in total, the most ever for a comedy in a single year, including Best Comedy Series. With Dan, his father, Eugene Levy, and stars Annie Murphy and Catherine O'Hara all winning their respective categories, Schitt's Creek became the first show ever — comedy or drama — to win all four of the acting categories in its field, meaning the cast had a lot to celebrate during their own mini, COVID-safe Emmy party up in Canada.

Unfortunately, Sarah wasn't able to attend the cast gathering, so fans didn't get to see her reaction to the wins until the following morning, when Dan posted a video montage of her watching the awards. Needless to say, she was absolutely elated for her family. "Last night happened so that this montage of my sister’s reactions could exist," Levy wrote, crediting her boyfriend, Graham Outerbridge, for capturing her emotions. "Love you, @sarahlevy_ . Wish you could have been there with us... but this is almost better?"

Fans shouldn't be so shocked at Sarah's very loud reactions. The actor had been posting footage of herself watching the Emmys ceremony and FaceTiming co-stars like Murphy all night on her Instagram Story. Yes, she was very emotional, and rightfully so. "Been crying for an hour and a half I'm dehydrated," she shared at one point. She later joined in on the fun — virtually — by posing for a family photo via FaceTime with Dan and their parents. "This is as good as it’s going to get for a family photo on a spectacular, record-breaking night," she wrote on Instagram. "Proud proud proud what just happened wowowowoweeewaaaa."

Luckily, if the cast gets what they want, it won't be Sarah's last time onscreen with her castmates. After the Emmys, Levy and the rest of the cast were asked about the possibility of a Schitt's Creek film. Murphy, for one, is very eager to reunite with her onscreen family, telling Variety she pitched Dan "five or six" ideas to "no response." And while Dan said he would only make a movie if it was "worthy enough for these incredible actors," he did admit that he really wants to work with them again, adding, "This has been the most incredible experience."