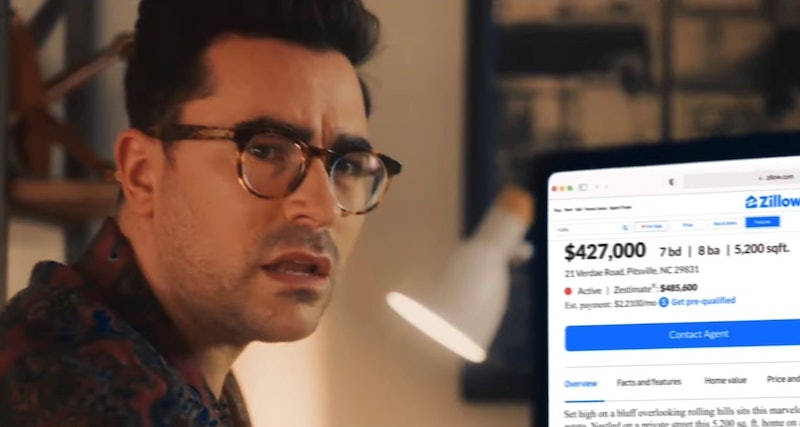 Let's be honest: learning to bake bread isn't the only socially distanced pandemic pastime you've picked up over the past year. Thanks to Dan Levy's Zillow sketch on Saturday Night Live, online house-hunting is now finally getting its time in the spotlight. "You used to want sex, but you're in your late 30s now," Bowen Yang's character said in the sexy ad parody, addressing viewers who might be bored and looking for something to spice up their lives. Added Levy, "Sex isn't doing it for me anymore. ... I need a new fantasy."

Enter Zillow. "I'd never live in North Carolina, but if I did, I could buy a big, gross mansion," the Schitt's Creek star and first-time SNL host said in a breathy voice. Later, he even shared a little pillow talk with his partner (Yang) — moaning and all — about low taxes and how a guest house has its own little kitchen. Cast member Ego Nwodim perfectly summed it all up when she observed, "The pleasure you once got from sex now comes from looking at other people's houses." (Luckily, Cecily Strong's Re/Max agent character was only a call away to put an abrupt halt to all the hilarious sexual innuendos.)

More than a few Twitter users felt seen in the sketch that also starred Mikey Day, Heidi Gardner, and Alex Moffat. "We may be a divided country but I think most of us can at least agree that the Zillow sketch on SNL hit way too close to home tonight," MSNBC's The ReidOut host Joy Ann Reid tweeted during the episode. Another viewer wrote that they felt "personally attacked by this relatable content," while someone else added that the Zillow commercial was "probably the best, most-accurate SNL skit" they'd ever seen.

Zillow's official Twitter account even got in on the fun, retweeting fan posts including one that called Zillow their "love language" and another that said, "So I see SNL knows what I do when I'm home alone..." The company also addressed Levy directly, writing, "hey @danjlevy see you at home," alongside a wink emoji.

More like this
The Black Lotus Staff Has "Had Enough" In The 'White Lotus' Spoof From 'SNL'
By Brad Witter
Michael B. Jordan Tackled His "Public Breakup" With Lori Harvey On 'SNL'
By Brad Witter
Who Is Pete Davidson Dating? He & Chase Sui Wonders Got Caught Kissing
By Jake Viswanath
'The Queen’s Gambit' Season 2 Tweet Wasn’t From Anya Taylor-Joy
By Mary Kate McGrath, Jack Irvin and Grace Wehniainen
Get Even More From Bustle — Sign Up For The Newsletter
From hair trends to relationship advice, our daily newsletter has everything you need to sound like a person who’s on TikTok, even if you aren’t.