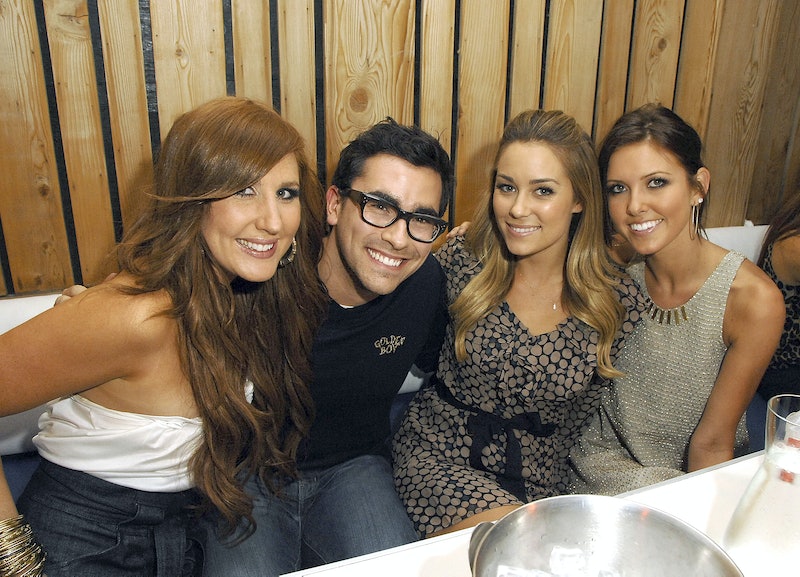 David Rose is too snobby for the town of Schitt's Creek, cheap rosé, and apparently, reality television. In a Nov. 18 interview on The Tonight Show Starring Jimmy Fallon, Dan Levy revealed that MTV's The Hills made him swear off reality TV for a long time. Fortunately, his self-declared ban wasn't permanent, nor was it the result of watching the show too often. According to Levy, his decision to give up the genre was because he was working for MTV at the time and he simply knew too much.

Levy began by explaining that before Schitt's Creek, he spent many years co-hosting The Hills aftershow, where he would comment on Lauren Conrad and Heidi Montag's drama with special guests. Unfortunately, the hosting gig ruined the hit show for him. "When you work so closely with a reality television show, and I love The Hills, but it kind of takes the magic out of the experience of watching because you kind of end up knowing too much about how it works," he admitted.

However, the coronavirus pandemic forced him to rekindle his love for reality TV — because it was his only option left at one point. "I had to take a long hiatus and then quarantine happened and I had quite literally watched every show on television, so I finally resolved myself to accepting the fact that I only have reality TV left," he said.

In an unexpected turn of events, watching too much reality TV has now become the problem, with Levy noting that the genre is "all I watch" now. The actor has a particular affinity for Bravo shows, with his favorites being The Real Housewives of Atlanta and the Below Deck franchise. "The drama that happens on the last season of Below Deck: Mediterranean is earth-shattering," he joked. "I have many times thought about vacationing to Australia to take Hannah [Ferrier]'s yachting course... I would last 25 seconds on that show."

Although his time working at MTV made him resent The Hills, it was ultimately worthwhile. In an interview on Entertainment Weekly's BINGE podcast, Levy admitted that The Hills partly inspired the storyline of Schitt's Creek — even if he didn't realize it at first. "Now, in retrospect, I can see the connection," he said. "What I found really fascinating was exploring that cultural awareness and saying now that we all know the day-to-day of these kinds of people, what would it look like if we played on that, took the money away, and examined what the family dynamic would be like without the money."

As fans will remember, Montag and her now-husband Spencer Pratt quickly spent their $10 million fortune after The Hills' conclusion on things like $30,000 shopping sprees and Montag's iconic pop album Superficial, which she said cost her almost $2 million to record. Years later, it turns out their financial troubles indirectly inspired Levy's beloved series. Thank God for Speidi, the gift that keeps on giving.

More like this
How To Stream 'Pretty Wild'
By Arya Roshanian
What Is 'Pretty Wild' Star Tess Taylor Up To Now?
By Morgan Leigh Davies
Netflix Reveals First Look At Wednesday In The 'Addams Family' Spinoff Series
By Bustle Editors
Devon Diep From 'Bling Empire' Wrote A Song About Her “Second Chance At Love”
By Grace Wehniainen
Get Even More From Bustle — Sign Up For The Newsletter