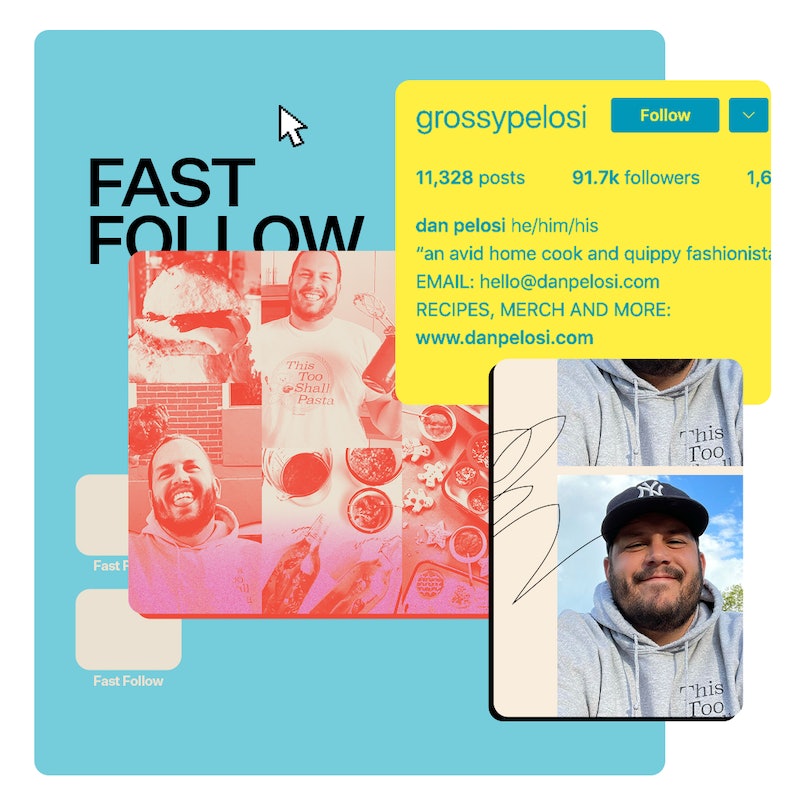 It started, like the best things always do, over dessert. Dan Pelosi, known to his Instagram followers as @GrossyPelosi, was hosting his annual holiday cookie party in 2019 when he decided it was time to make a change. After spending the week pre-baking sugar cookie and gingerbread dough for guests to decorate and brewing hot chocolate for them to spike with alcohol and marshmallows, the longtime creative director decided this was what he was really passionate about. “I had a really sh*tty 2019 and I was trying to figure out what I could do to just shift things a little bit for me, creatively and mood-wise,” says Pelosi, whose Instagram handle is a reference to his college nickname. Bringing his love of simple yet elevated recipes to the masses became the answer.

At the time, Pelosi’s Instagram had 5,000 followers and as he puts it, was “kind of all over the place.” So he spent the first few months of 2020 rebranding his account to be all about food, posting easy to follow recipes rooted in his Portuguese-Italian heritage each weekend. When lockdown turned us all into home cooks mere months later, Pelosi’s lack of formal training and big Italian grandma energy (he’d like to be known as the B-E-A-R-foot Contessa, a nod at his physique and love of Ina Garten) resonated with his followers. He started cooking seven days a week and eventually quit his day job as a senior creative director at Ann Taylor. (“It took a lot of time with my therapist being like, ‘What do I do?’” he says of the choice.)

Pelosi’s investment in himself paid off. With over 92,000 followers and endorsement deals with everyone from KitchenAid to Grindr, @grossypelosi isn’t just a personal Instagram account, it’s a business. But his secret sauce remains his casual, low-stress approach to cooking. “I was coming up with all these recipe ideas recently and I was like, ‘We could do a Sunday ragù that's braised.’ It was just this complicated recipe that made it sound like I was this fancy cook. Then one of the recipes was a calzone,” he says. “Obviously, I went with the calzone. That’s why people follow me, because I’m a really friendly face in the kitchen. Braised ragù is not what people want from me.”

Michelle Williams’ Wikipedia. I look up strong female actresses’ Wikipedia and I read where they came from and everything about their entire career. Then I meticulously go through the list of award nominations. Michelle, who’s probably one of my ultimate queens, was my latest. I got really excited because she's got a new role coming up that surprised me. She's in Steven Spielberg's next movie, which is about his childhood.

Here's one note from August 2, 2015. It says, "Casual luxury. Shiny. Sweaters and outwear. Blues and heather grays. Aquas winter surf. Bright yellow and cobalt. Cashmere. Gifting for her and others. 484 indigo extract c1571p. Small iced soy chai one shot. Double iced espresso." That’s from when we’d be concepting for the holidays at Ann Taylor and those are the words that we would use. Then apparently I was thinking about my Starbucks order.

Then the other one is: "My first time watching at gymnastics meet and I am BEAming!! Her performance has me FLOORed!!! BARS above the competition!!!! She has VAULTED to a new place in my heart!!!!!" That's me workshopping a caption for a photo of my niece at her first gymnastics meet.

Which links are currently open in your tabs?

Personal Gmail, business Gmail, Google calendar, Google drive, four tabs of my own website with my holiday cookie recipes. Weather.com, because I'm obsessing over the weather. Instagram for desktop, which saves my life every day. That Jeremy Song New Yorker article that everyone freaked out about last week. But it’s like we're all sitting here, obsessed with Succession. Let the guy do whatever he wants. Also, good for him for figuring out what works!

It's not Ina Garten, because she hasn't followed me, but she has commented on two of my posts. (She's my queen.) Katie Couric followed me, which is huge and she's really good friends with Ina. Then I found out that Hannah Einbinder from Hacks follows me.

The show got me through a tough time this summer when I had a surgery and I was on painkillers and watched it two times in a row. Then [Hannah] DMed me two weeks later and I had no idea she followed me. She was like, "Hey Grossy, if you could spend a minute. I'm obsessed with your trip to the Berkshires. Can you give me your recs?" I was like, excuse me? Apparently we had been DMing for years but I didn’t realize who she was!

Krista Marie Young is this textile artist and designer that I'm impressed with. She does these Christmas stockings that are just incredible. Our branding is kind of similar. She does sort of checkerboard, stripy color stuff. There' something in the future for us to work on together.

How do you think we get boyfriends? I didn't meet my current boyfriend on Instagram, but Instagram's a great dating app and it's actually the best app for hookups.

More like this
Annie Rauwerda Finds Treasure In The Depths Of Wikipedia
By Chloe Foussianes
Dunkin’s Valentine’s Day Lineup Includes A Drink That Tastes Like Dessert
By Alexis Morillo
Ben & Jerry’s New Sundae Flavours Are A Chocoholic’s Dream
By Sophie McEvoy
Everything You Need To Know About The Samsung Galaxy S23 Ultra’s New Camera
By Alexis Morillo
Get Even More From Bustle — Sign Up For The Newsletter
From hair trends to relationship advice, our daily newsletter has everything you need to sound like a person who’s on TikTok, even if you aren’t.