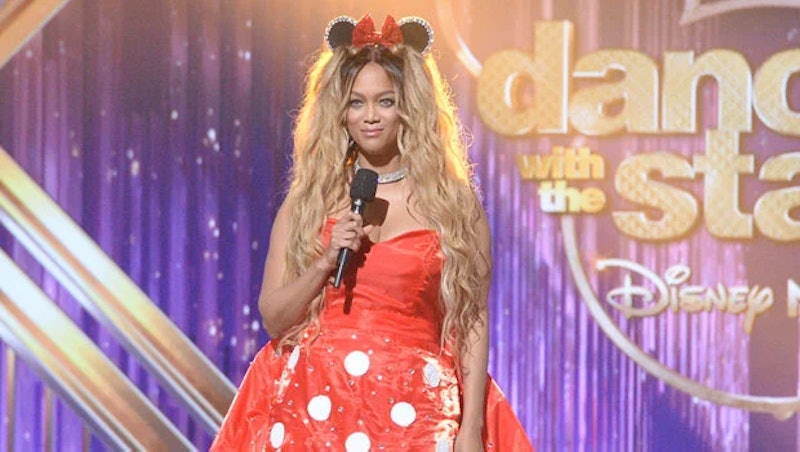 There are plenty of reasons to subscribe to Disney+. For starters, the streaming platform is full of all of the Disney classics you grew up with, and is the exclusive home to tons of binge worthy movies, TV shows, and documentaries. But Disney+ just announced some exciting news that marks a major first for the platform, and if you haven’t already subscribed, it’s a pretty convincing selling point.

After 16 years and a whopping 30 seasons on ABC, Dancing with the Stars will have a brand new home: Disney+! The iconic reality competition series will premiere exclusively on Disney+ in the U.S. and Canada this fall, and is the first live series to debut on the streaming platform. DWTS received a two season pickup, so it seems like Disney+ will definitely be its new home for the foreseeable future. This is fantastic news for anyone who lives to see host Tyra Banks’ unforgettable–and often viral–outfits from the show.

Although the DWTS Season 31 cast has yet to be announced, it’s sure to be exciting. The series has featured everyone from Zendaya to Normani to Jojo Siwa over the years, and is showing no signs of slowing down anytime soon. And can you imagine how much more epic Disney Night will be in the upcoming seasons?

There’s one more reason reality TV fans should consider a Disney+ subscription. Disney+ offers a bundle which includes access to Hulu and ESPN for $13.99 per month with ads, or $19.99 a month to go ad-free. This is a pretty great deal, especially when you consider the fact that Hulu is one of the best streaming services for unscripted fans. After 20 seasons of sharing their lives with the world with Keeping Up with the Kardashians on E!, the Kardashians and Jenners recently moved to Hulu for the premiere of their latest show, The Kardashians. The Hulu library also provides access to some of the most popular reality series of all time, from Love Island to Ru Paul’s Drag Race.