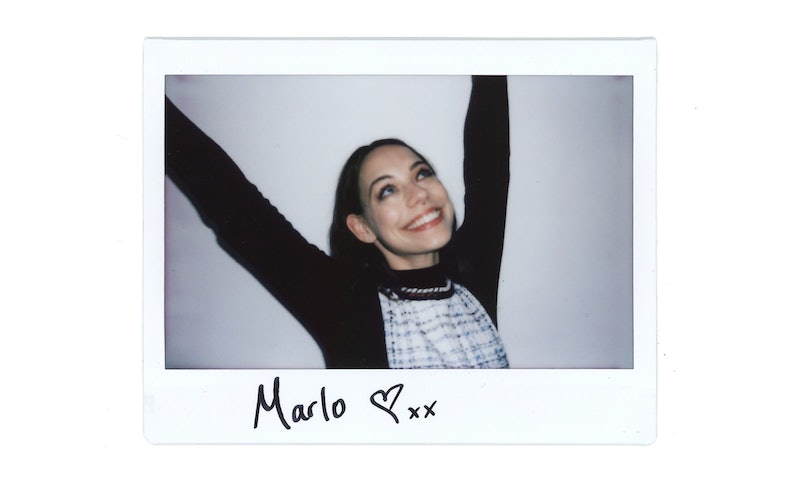 Unlike the rebellious cheerleader she plays on USA's Dare Me, the only uniform Marlo Kelly wore in her teens was the one required at her artsy all-girls school in Sydney, Australia. "I had the polar opposite schooling experience," Kelly explains during a visit to Bustle's New York City office. She was never a cheerleader, a gymnast, or even made it past a couple of dance classes as a kid.

To play Beth Cassidy, a Midwestern high schooler with "top girl" cheer skills and an attitude to match, Kelly looked to soapy American teen TV classics like Gossip Girl and The O.C. for inspiration. She also read Sylvia Plath's poetry to tap into Beth's teenage angst, saying that it helped her realize the character isn't a mean girl or a party girl, but a "wounded warrior" who longs to connect.

But Kelly didn't have to take a page from anyone else's book to relate to Beth's bond with her best friend Addy (Herizen Guardiola). Kelly's own best friend is a former classmate she met on the first day of third grade. "We're so intertwined as people," she says. "Luckily we don't have that tumultuous, fractured side of our relationship like Addy and Beth, but that really codependent side where you're a necessity to one another, I completely understood. I have that in my life."

There are new friendships forming on the Dare Me set, too. While filming in Toronto, the actor became close with her roommate Alison Thornton, who plays her character's onscreen nemesis. The cast even went skydiving to celebrate the end of filming Season 1. "We already have to trust each other so much not to fall and not to hurt ourselves on set," Kelly points out of the physically taxing cheer scenes. "Camaraderie is so much easier when you're already a team."

Find out more about what makes Kelly worth cheering for in her Bustle Booth below.

More like this
In 'The White Lotus,' Leo Woodall Gets His Moment
By Gabrielle Bondi
Liz Feldman Explains The 'Dead To Me' Series Finale & Fan Theories
By Brad Witter
'Wakanda Forever' Is Already Opening Doors For Mabel Cadena
By Grace Wehniainen
Elizabeth Debicki On Her Approach To The Most Debated Scene From 'The Crown'
By Grace Wehniainen
Get Even More From Bustle — Sign Up For The Newsletter