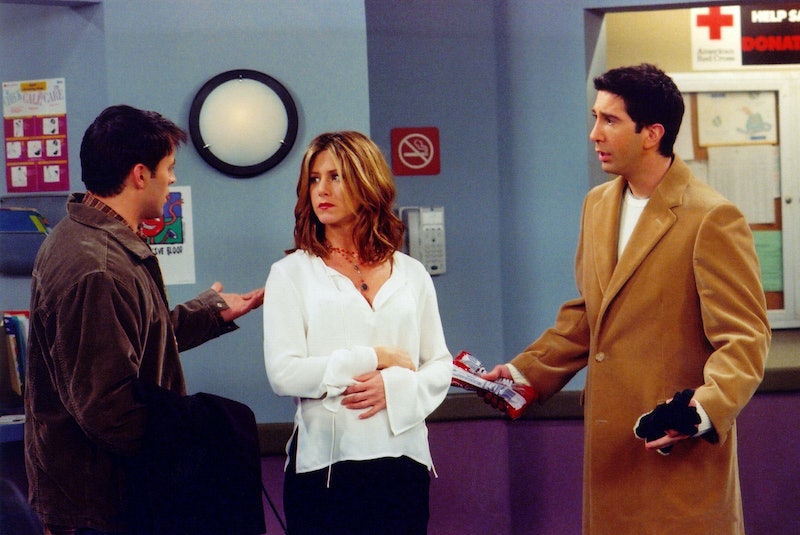 It may have been nearly two decades since Friends went off the air, but one star is still fighting one key argument from the show. In a recent interview, David Schwimmer confirmed he thinks that Friends' Ross and Rachel were on a break, just like his character did. We can hear Rachel's screams already.

Schwimmer opened up about how invested fans were in Ross and Rachel's love story, including that one possible cheating moment, while appearing on the July 20 episode of The Tonight Show Starring Jimmy Fallon. "People are so passionately divided about whether or not they were on a break," he explained. Fallon then asked Schwimmer for his final thoughts on the hugely controversial topic, and he didn't miss a beat. "It’s not even a question," he said. "They were on a break."

As fans will remember, virtually all of Season 3 centered on whether the two were actually broken up — aka "on a break" — when Ross slept with Chloe, the girl from his local copy place, or if he had actually cheated. Rachel was infuriated when she found out about his rendezvous, considering it cheating, while Ross was adamant that they were "on a break" and therefore open to seeing other people. This quickly became one of his signature lines, especially when he got into arguments with Rachel or was even teased by the other friends. And to this day, Ross still won't let this go — at least, in real life, as Schwimmer has just proven.

While the topic is still widely divisive among fans, it seems that a slight majority does agreed with Schwimmer. A survey of 1,865 people conducted by dating site PlentyOfFish found that 60% believed that Ross and Rachel were on a break, according to PEOPLE. Of course, answers varied depending on their definition of a break, and even their gender — 44% of women surveyed thought that Ross cheated, compared to 36% of men. But overall, the people have spoken, and they're siding with Ross.

None of the other cast members have revealed what stance they have on the topic — well, maybe aside from Jennifer Aniston, who joked that Ross and Rachel were still on a break in an Instagram comment. But if all goes well, the cast will have the chance to argue the point between themselves soon. Schwimmer told Fallon that the highly anticipated Friends cast reunion is currently set to shoot in mid-August, after it was initially postponed due to the coronavirus pandemic. However, the new date is still dependent on safety. "We're going to wait and see another week or two if we all determine it’s really safe to do," he explained. "If not, we'll wait until it’s safe." Maybe Ross and Rachel will have ended their break by then.