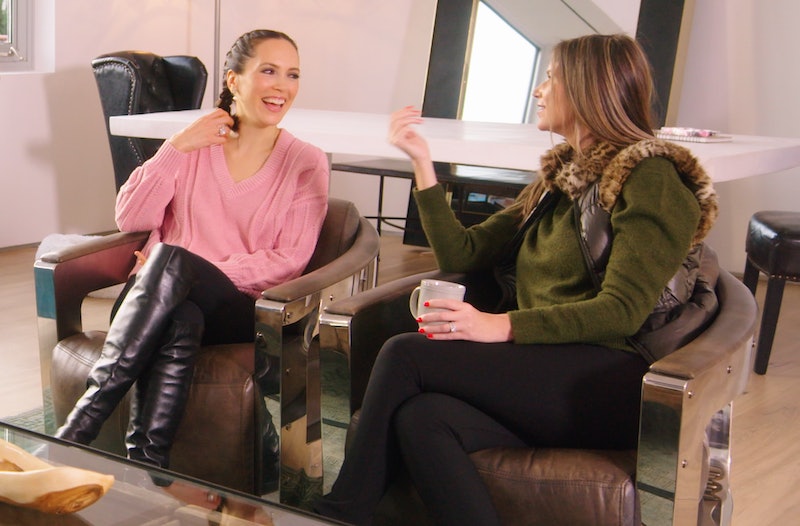 Between the outrageously expensive LA homes, bombshell divorce scandals, and impractical worksite outfits, Netflix's hit reality series Selling Sunset really was lockdown viewing gold. But now Davina Potratz, one of the show's glamorous Oppenheim Group estate agents, has revealed that there were a fair few moments we didn't get to see – including some more light-hearted scenes she wishes had made the cut.

Fans of the series will remember Potratz trying to sell a ridiculously lavish $75 million home, which led to some heated arguments with Oppenheim co-founder Jason. Speaking recently to the Radio Times about one particularly fiery discussion the two of them had during season three, episode three, Potratz said:

“We were at Brett’s house and I was arguing with Jason about the $75 million listings and we were actually having a great time. We were all laughing and joking. And I was actually initially joking with Jason and I was poking fun at him. And I said you know, ‘Am I gonna sell this house?’ We all know that it’s overpriced.

She adds: “But you know, we’re arguing, and anyway, we started off joking. And I said, ‘So you’re saying there’s a chance?’ And he’s like, ‘Are you quoting Dumb and Dumber ?’ and I said, ‘Yes.’ And we were just bursting out laughing.”

In the interview, Davina explained that the funny moment was left out of the episode and the conversation appeared tenser than it actually was.

“And then all the girls started backing up behind me, and they were kind of defending me,” she goes on to explain, “and I didn’t even know they were there until I turned around and I was like, ‘Wow, you guys are listening to this conversation!’

“But you didn’t see, as the audience, the really funny part where we were like laughing on the floor dying about this Dumb and Dumber joke. And we were just teasing each other about it.”

Considered one of Selling Sunsets more, um... vocal characters, Davina Potratz also commented on how she was portrayed on the show overall.

“There’s a lot of joking around and fun that we’re having as well,” she explained to Radio Times. “And I don’t know if you necessarily see that, especially from my character on the show. You know, I’m not a one-dimensional person, nobody is, and you really cannot define anyone based on the show, right?”

Per the Oppenheim Group website, the $75 million mansion is still up for grabs. However, in her Radio Times interview, Potratz sticks by her guns, saying she still thinks the listing was "worth a shot".

Potratz said she "completely agrees" that the 15,000 sq ft home by real estate mogul Adnan Sen is overpriced. "But I still feel like it’s worth a shot," she said. "Because I know for a fact that a lot of houses, especially in LA are overpriced, and they end up selling for half of the asking price or even less sometimes."

Will the house finally sell in season four? We'll have to wait to find out.

More like this
The 'Heartstopper' Cast Were Spotted Filming In A Major City
By Nola Ojomu and Sam Ramsden
Here's When 'The Crown' Season 5 Will Premiere — And What To Expect
By Bustle Editors
What Exactly Is The Bish & Chips Show?
By Frances Stewart
'Rings Of Power's Markella Kavenagh On The Truth Behind *That* Scene With The Stranger
By Olivia-Anne Cleary
Get The Very Best Of Bustle/UK