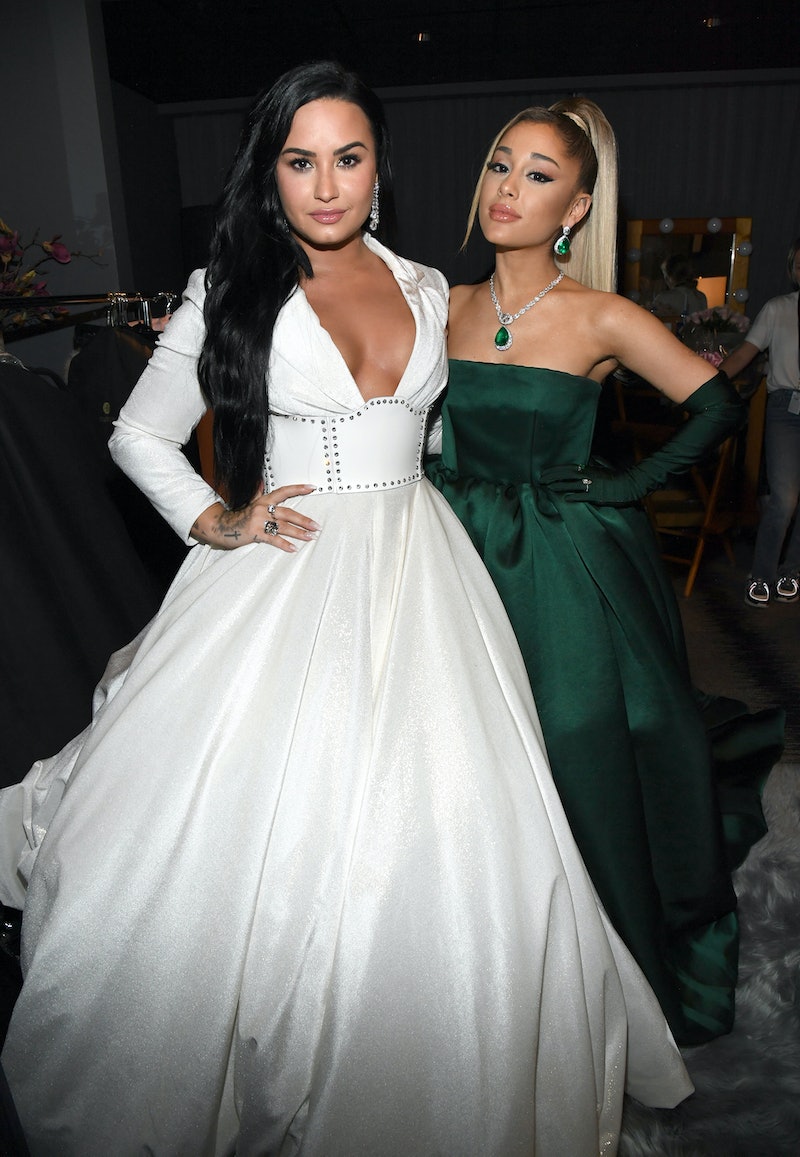 Two of today’s most prominent female artists — one who got her start on the Disney Channel, the other on Nickelodeon — are about to unite, so prepare your 10-year-old self. Demi Lovato’s new album will include an Ariana Grande collaboration. Lovato confirmed the news herself in an interview with The New York Times published on Tuesday, March 16. One day prior, the singer announced that her new album, Dancing With the Devil... The Art of Starting Over, will be released on April 2. And in a new interview with Paper magazine, Lovato revealed the title of her and Grande’s duet — and we couldn’t be more excited.

The NYT revealed that Lovato’s collaboration with Grande was the most recent addition to the album — but eagle-eyed fans already figured out that the song was coming days before. On March 7, the duo hinted at the upcoming collab when Lovato posted a video of herself in the studio on her Instagram Story, revealing that she was “recording a last minute collab” and asked fans to guess who the other artist was.

Grande later shared a brief video of herself doing some vocals on her Instagram Story, with the caption “backgrounds on a song for a friend.” Lovato then reposted that video on her own Story, adding three side-eye emojis, which truly say a thousand words. And if that wasn’t enough, according to Billboard, a fan DM’d Lovato to ask whether the “last minute collab” was with Grande, to which the singer responded with a smiling face emoji.

Per Paper’s Jocelyn Silver, who wrote the magazine’s latest cover story with Lovato, the collaboration with Grande is titled “Met Him Last Night.” Described as a “post-quarantine club banger ... that highlights two of the most powerful voices in pop,” the duet is one of three set to appear on Lovato’s new album. Other artists featured include rapper Saweetie on the empowering “My GFs Are My BFs” and Noah Cyrus on a song that’s yet to be announced.

While the collaboration may come as a sudden surprise to some, it was truly inevitable. Lovato and Grande first met in 2013 after performing at Wango Tango and quickly became friends. "The people that aren't willing to chill with you at home are the type of people that just want to be seen with you,” Lovato told Billboard in April 2018. “When Ariana Grande and I hang out, it's super chill.”

In the summer of 2019, Lovato signed with manager Scooter Braun. However, before the deal was done, Braun asked his longtime client Grande for her opinion. After going to lunch with Lovato, Grande basically demanded that Braun sign her friend. “She texted me: You have to take her on, this is my friend,” Braun recalled to NYT. “I want to know she’s safe.” Now, the pair is closer than ever, as Lovato told Harper’s Bazaar in April 2020. "I love the fact that Ariana and I have such a supportive friendship because it's hard to find,” she said, noting how the media often pits female singers against each other.

Dancing With the Devil... The Art of Starting Over will also feature Lovato’s single with Sam Fischer, “What Other People Say,” as she revealed during a Clubhouse chat. The set will contain 19 tracks in total, spanning genres like country, R&B, disco, and ‘90s pop. The release intentionally coincides with Lovato’s upcoming YouTube docuseries, Dancing With the Devil. “If you listen to it track by track, it’s kind of actually like the non-official soundtrack to the documentary,” she said, according to Variety. “Because it really does follow my life over the past couple of years.”