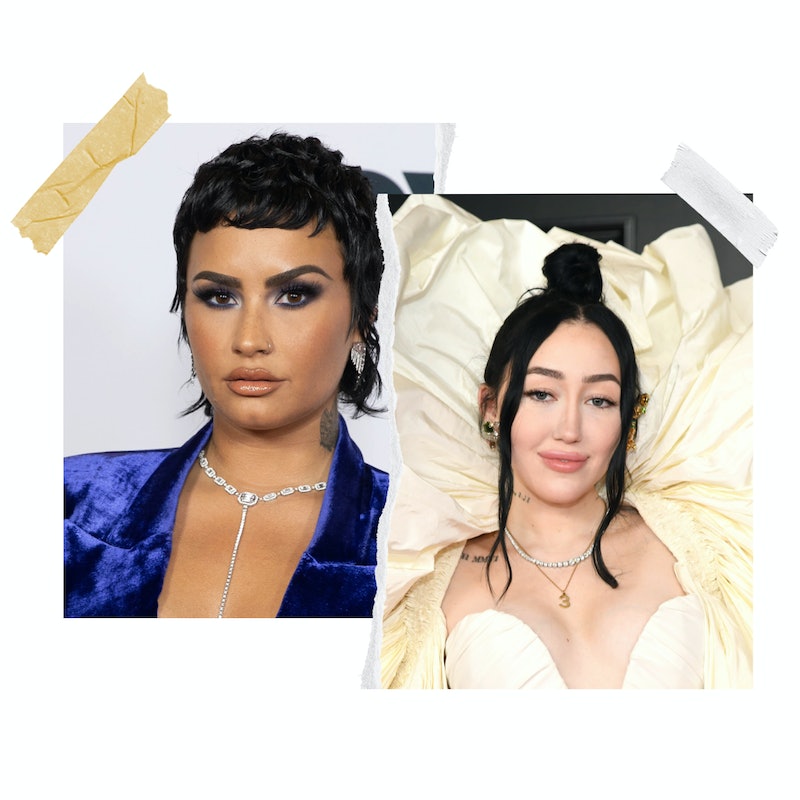 Don’t go carving Demi Lovato and Noah Cyrus’ initials into a tree just yet. While it’s true that the two are spending a lot of time together, an E! News source revealed that “they are not exclusively dating by any means.” The insider said that the singer’s are merely “hanging out” and “enjoying each other’s company,” which seemed rather clear when they were photographed holding hands on June 30. “They have been friends for a while, but there is definitely a connection there,” the source added.

Lovato and Cyrus are both “very creative people” who have grown closer because of their “creative and spiritual bond,” according to the insider, who added that the two have been “leaning on each other for ideas.” This might mean they have more music on the way. When it comes to romance, though, an actual relationship might never materialize. “Demi has expressed they want to remain single but is a very open person about seeing where life takes them,” the source said.

The musicians fueled relationship rumors late last month at Six Flags Magic Mountain in California, where they were attending a party for Space Jam: A New Legacy. Lovato, who was also accompanied by a group of friends, was spotted hand in hand with Cyrus. The outing came less than a week after the singers performed a duet of their collaboration “Easy” from Lovato’s most recent album, Dancing with the Devil ... the Art of Starting Over, at YouTube Pride 2021 on June 25.

Lovato posted a photo with Cyrus on Instagram after their performance, writing, “Thank you @noahcyrus for closing out the night w me for @youtube’s pride 2021 celebration.” The “Dancing With the Devil” singer added, “I’m so happy we finally got to sing our song together.” Cyrus commented on the post, replying, “Thank you for having me” and “you were effortlessly perfect and im never not in awe of u.”

Cyrus also shared a clip from the performance on her own account, writing, “Proud and honored to have performed ‘Easy’ for @youtube’s #pride2021 event alongside @ddlovato and the @transchorusla.” She added a message for Lovato, writing, “Demi, thank you for having me. I’m so proud of you and who you are.”

Cyrus and Lovato were first linked in March when the two were reportedly hanging out after recording “Easy.” Cyrus, the younger sister of fellow musician Miley Cyrus, previously dated the rapper Lil Xan, but the two split in 2018. She was also rumored to be dating Tana Mongeau after the YouTuber called her “girlfriend” in a video. Mongeau later denied any romantic connection in an interview with Entertainment Tonight, saying, “There is no tea. ... I literally just like to spend time with her and care about her. Everything else just kind of makes it a mess.”

Lovato, who opened up to fans about being nonbinary on their podcast 4D With Demi Lovato in May, has been on a self-acceptance journey in recent months. In the documentary Demi Lovato: Dancing With the Devil, the two-time Grammy nominee discussed how ending their engagement to Max Ehrich helped them realize they were “too gay to marry a man right now.” Lovato, who identifies as pansexual, also said in a March Entertainment Weekly interview, “I’ve always known I was hella queer, but I have fully embraced it.”

Last week, Lovato opened up about coming out as nonbinary during the YouTube Pride event, too. “I actually had come out to loved ones and friends last year, but this year I made it public,” they said. “I felt it was really important for me to share that with the world.” The “Confident” singer described being nonetheless excited to further embrace their identity and “grateful for the progress that my family members have made in using my pronouns, team members, friends.”

More like this
Who Is Nick Cannon Dating & How Many Kids Does He Have?
By Jordyn Tilchen and Radhika Menon
What Demi Lovato Really Thinks About Child Stardom, Depression, & Sobriety
By Radhika Menon
Kanye West Apologizes To Kim K "For Any Stress I Have Caused" In Rare Interview
By Jake Viswanath
Adam Levine Denies Having An Affair — But Admits He “Crossed The Line”
By Jake Viswanath and Radhika Menon
Get Even More From Bustle — Sign Up For The Newsletter