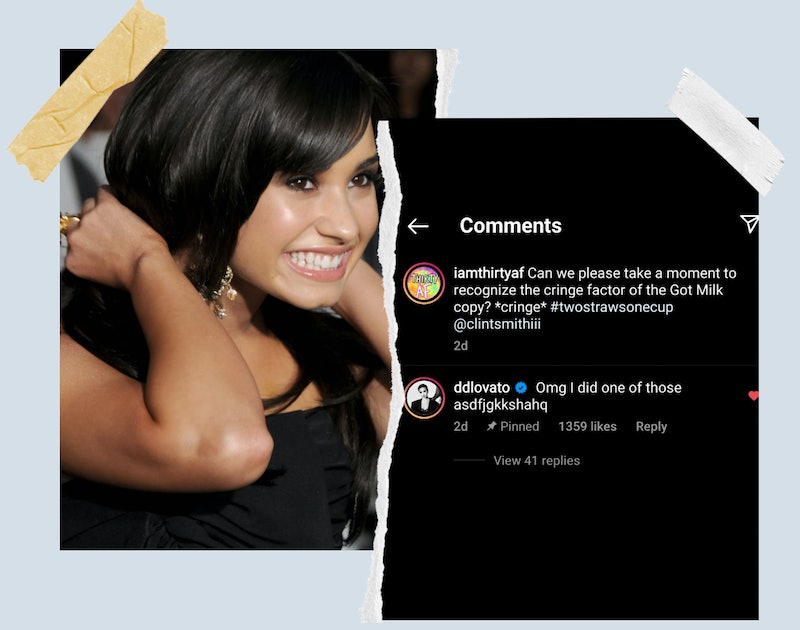 Most people have something they did in their adolescence that they’re completely embarrassed of nowadays, even global superstar Demi Lovato. The 29-year-old singer did a ridiculous “Got Milk?” advertisement during their Disney Channel days in 2009, and Lovato’s reaction to randomly remembering their ad campaign 12 years later in 2021 is pure gold.

It all started when Twitter user Clint Smith poked fun at the infamous “Got Milk?” ads that dominated the 2000s, which saw seemingly every A-list star ever, including Jennifer Aniston and Britney Spears, pose with milk mustaches to promote milk’s reported health benefits. “Whenever I think about the times I’ve been bamboozled, I think about how the dairy industry created the Got Milk? campaign which convinced me I needed to drink 17 glasses of milk per day or else my bones would crumbled into dust,” he wrote, which Lovato later saw.

And yes, their ad is just as hilarious as it sounds. Behold:

Lovato starred in the “Got Milk?” campaign in 2009, when they was promoting their underrated sophomore album Here We Go Again. One poster sees them sporting a guitar and the iconic milk ’stache, while another campaign image shows them crowdsurfing through what looks like a photoshopped audience. Except there’s no Photoshop, as evidenced by the commercial below. They’re actual people. “On stage I get energy from my fans,” the ad reads. “Off stage I dive into a glass of lowfat milk. The protein and other nutrients keep me rocking. Here we go again!”

In a behind-the-scenes clip, a then 17-year-old Lovato said they wanted to star in a “Got Milk?” ad after seeing stars pose for the ads during their childhood. “I’m really excited to be a part of the campaign because not only is it just huge, and everyone knows what it is, but I used to look at these posters when I was a little girl and I always wanted to know what it would be like. And here I am today doing it.” The Dancing With The Devil star also explained that they “love” drinking milk because it “keeps you lean, keeps you strong, and it keeps your hair and nails healthy.”

More like this
What Demi Lovato Really Thinks About Child Stardom, Depression, & Sobriety
By Radhika Menon
20 Years Later, Kelly Clarkson & 'American Idol' Judges Reunite For Her Hollywood Walk Of Fame Star
By Radhika Menon
Craig David Is Still Slicker Than Your Average
By Olivia-Anne Cleary
The Spice Girls Just Dropped A Brand New Music Video
By Sam Ramsden
Get Even More From Bustle — Sign Up For The Newsletter