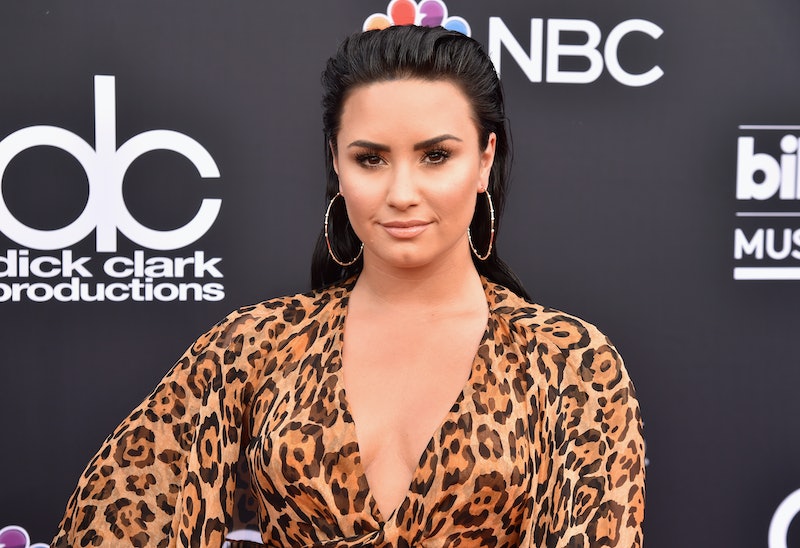 Ever since they began dating in March and decided to weather a big chunk of the pandemic together in Los Angeles, Demi Lovato and Max Ehrich have been on fans' minds. During a recent appearance on Late Night With Seth Meyers, Lovato revealed how she's been spending quarantine amid her public split from the actor.

"At the beginning of quarantine I got really into meditation, actually. I started meditating more," the singer told the host on Nov. 10. "It was something I had kind of done in the past but not really made a lifestyle out of it. Now I've started meditating. I kind of came up with this new philosophy that I'm never bored. I never have to worry about being bored because I can always meditate no matter where I am or what I'm doing. That's helped me a lot."

Lovato then explained how she has been focusing on some important platonic relationships after calling off her engagement to Ehrich. "[I'm] just building better relationships with my friends and family and even my dogs, getting to walk them is something I didn't get to do when I was working so much," she said. "This quarantine has been a nice little experience for me to get to know myself better."

Back in July, Lovato told Bustle that quarantine had allowed her to reconnect with herself and prioritize her mental health in a way that she hadn't had the chance to earlier. "I started doing all this work, allowing myself to feel the pains of all the losses that I've had or the adversities or traumas that I've faced," she said. "I think my ability to be vulnerable and be more intimate with people has really heightened."

Lovato continued, "It's very common for people to only really work on themselves when crisis happens or when they notice that they're slipping into old patterns or behaviors. So to be able to walk into this experience without a personal crisis and just be like, I can do the work on myself now because I have the time. ... It was a beautiful thing."

Though Lovato's recent breakup continues to make headlines — primarily due to Ehrich's concerning behavior — an Entertainment Tonight source said the split was for the best. And as the singer stated during her Late Night appearance, she's making the most of this time.

More like this
What Demi Lovato Really Thinks About Child Stardom, Depression, & Sobriety
By Radhika Menon
Kanye West Apologizes To Kim K "For Any Stress I Have Caused" In Rare Interview
By Jake Viswanath
Adam Levine Denies Having An Affair — But Admits He “Crossed The Line”
By Jake Viswanath and Radhika Menon
Everything To Know About Taylor Swift’s 10th Studio Album, 'Midnights'
By Grace Wehniainen and Jake Viswanath
Get Even More From Bustle — Sign Up For The Newsletter