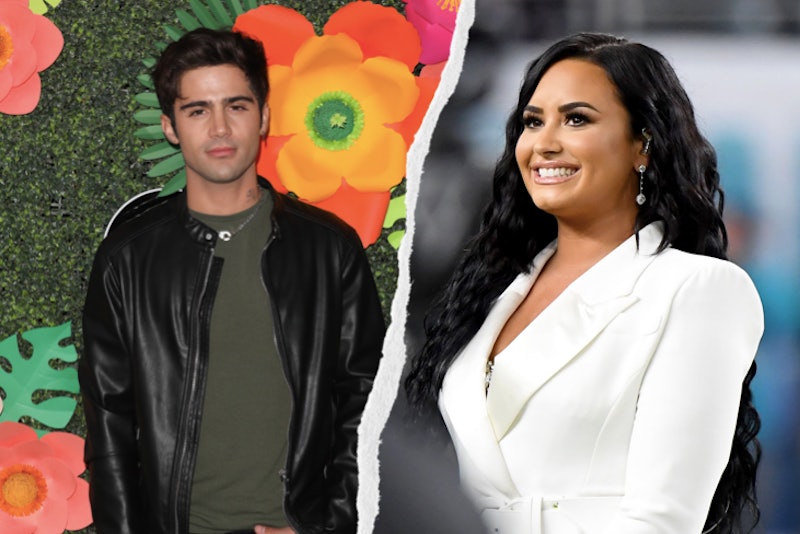 After a whirlwind courtship and a two-month engagement, Demi Lovato and Max Ehrich have split. A source close to the singer confirmed the couple has ended their engagement. Bustle also reached out to Lovato's rep for comment.

Lovato and Ehrich began dating back in March and were soon quarantining together in Los Angeles. However, it seems that as both performers — Ehrich is an actor best known for his work on the The Young and the Restless — returned to work, they decided to call it quits. "It was a tough decision, but Demi and Max have decided to go their separate ways to focus on their respective careers," a source told People. According to their social media, Ehrich is currently on location in Georgia filming a new movie, Southern Gospel, while Lovato is busy promoting her new single with Marshmello. The source continued, insisting they split on good terms: "They have respect and love for one another and will always cherish the time they spent together."

Rumors of a split have been building for a few weeks, ever since tweets allegedly written by Ehrich between 2010-2015 went viral. In the tweets, he reportedly wrote that he wanted to marry Selena Gomez, saying that she was "prettier" than Lovato. At the time, the singer dismissed any speculation on her relationship in her Instagram Stories, accusing people of using "FAKE images to put women against each other."

Ever since they went public in March, both Lovato and Ehrich have been very effusive when speaking about each other on social media. In June, she wished her then boyfriend a happy birthday on Instagram, writing in part, "I feel unconditionally loved and accepted by you in a way that I've never felt before." That same month, Ehrich called her "the love of my life." Soon enough, they were engaged, announcing the happy news on July 23 with photos of their romantic beach proposal. "I knew I loved you the moment I met you," Lovato wrote on her Instagram, while Ehrich gushed, "Words cannot express how infinitely in love with you I am forever and always and then some."

A few weeks ago, Lovato said that her relationship benefitted from quarantine in the pandemic. "Quarantine either makes or breaks the deal," she said during n appearance on SiriusXM's The Morning Mash Up. "And it really made that. So I'm really blessed, really fortunate, and continuing to count my blessings every day."

More like this
Everything You Need To Know About Kanye's Post-Kardashian Dating Life
By Bustle Editors
Hilary Duff's Husband Matthew Koma Has Her Name Tattooed On His Butt
By Jake Viswanath and Stephanie Downs
5 Wild Theories About Miley Cyrus’ “Flowers” Music Video
By Jake Viswanath
Britney Spears Shares & Deletes Photos Of Justin Timberlake From 22 Years Ago
By Jake Viswanath
Get Even More From Bustle — Sign Up For The Newsletter
From hair trends to relationship advice, our daily newsletter has everything you need to sound like a person who’s on TikTok, even if you aren’t.