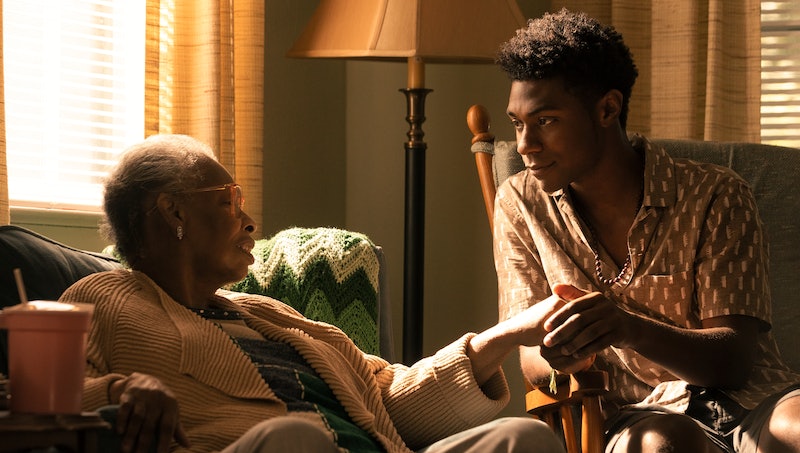 Spoilers ahead for Outer Banks Season 2. Outer Banks may be about a fictional treasure hunt, but it also draws from real history. This is especially true when it comes to Denmark Tanny, a freedman at the center of the show’s central mystery who Pope finds out is his ancestor. In the series, Tanny was enslaved on the Royal Merchant, but escaped with the gold after the ship went down and was able to buy his freedom. His story is in part based on Denmark Vesey, a Black carpenter in South Carolina who bought his freedom and was later killed after plotting a slave rebellion in 1822.

In the show, John B and the Pogues first learn about Tanny when they realize Sarah Cameron lives on Tannyhill, the plantation that Tanny bought after the shipwreck. Using a trail of clues, they manage to find Tanny’s gold in a well under a house in parcel nine. Though Ward Cameron steals the gold away from them, the Tanny thread is picked up again in Season 2 when Pope is contacted by Carla Limbrey, a descendant of the Royal Merchant’s captain and former associate of Ward. Limbrey is keen to find Tanny’s key, as it leads to the giant gold Cross of Santo Domingo, which she believes contains a piece of Christ’s robe that can heal her illness. (Spoiler alert: it does not.)

It’s through Limbrey that Pope even learns of his ancestry. She tells him Tanny was a freedman who was born in 1806 and bought the freedom of his sons. When he tried to free his wife and daughter, Limbrey’s ancestors refused, and Tanny was hung in 1844. Though it seems baffling and far-fetched that Pope would be related to Tanny — after all, Limbrey only accosts him because he’s John B’s Black friend — Pope later confirms the connection with his grandmother. Through another series of clues, Pope finds his family’s cross, but it’s stolen away again by the Camerons.

Tanny’s story shares only a few details with Denmark Vesey’s. Though the two have the same first name and existed at around the same time, the real Vesey lived in Charleston, South Carolina, while Outer Banks takes place in the islands that border North Carolina. Vesey was born around 1767, likely on the island of St. Thomas. According to an 1861 Atlantic article, Captain Joseph Vesey, a Charleston slave owner, bought him as a cabin boy when he was 14. Though records are scarce about Vesey’s life, he did eventually buy his freedom after winning a lottery in 1799 (not by making off with sunken treasure). The New York Times cites the winning amount as $1,500, of which $600 went towards buying his freedom. Like Tanny, when Vesey tried to buy his wife and children’s freedom, their master refused.

Frustrated and angry at white Americans’ inhumanity, Vesey began planning a slave rebellion sometime around 1822. Per NPR, Vesey planned to kill the city’s white masters, burn down the buildings, and then escape to Haiti by boat, where a group of enslaved people had successfully overthrown French colonists decades earlier.

There’s a moment in Outer Banks where Pope points out the Freedman’s Assembly of God church, noting that Tanny preached to all the freedman there. This is very similar to real life. Vesey’s plan included enlisting the help of over 9,000 enslaved people to fight with him, many of whom he met in church. According to David Robertson, author of Denmark Vesey: The Buried Story of America's Largest Slave Rebellion, Vesey "could not have progressed as far as he did without the organization and membership of the African Methodist Episcopal Church." After Charleston's white leaders closed the church in 1818, Vesey persuaded many of the congregants to join his uprising. Using religious analogies, Vesey preached that they were like the New Israelites and deserved to be free.

The uprising was set to happen on July 14, but it failed after a frightened slave revealed the plot to his master. Vesey was captured, and Charleston authorities hung him and his 34 co-conspirators. The church was burned down for its association with Vesey. (It later reformed in 1865, and tragically was the same church where white terrorist Dylann Roof shot and killed nine congregants in 2015.)

Today, some critics decry Vesey as a violent terrorist, while others hail him as being one of the forefathers of the Civil Rights movement. In 2015, activists unveiled a statue of Vesey in Charleston to honor his memory. “There was no ‘system’ for Vesey to work within; his state had flatly banned private manumissions, or the freeing of slaves, in 1820,” Douglas Egerton writes for The New York Times. “The only path to freedom was to sharpen a sword. Americans today can admire the Rev. Dr. Martin Luther King Jr. and his 1963 nonviolent March on Washington, but his world was not Vesey’s, and we must understand that.”