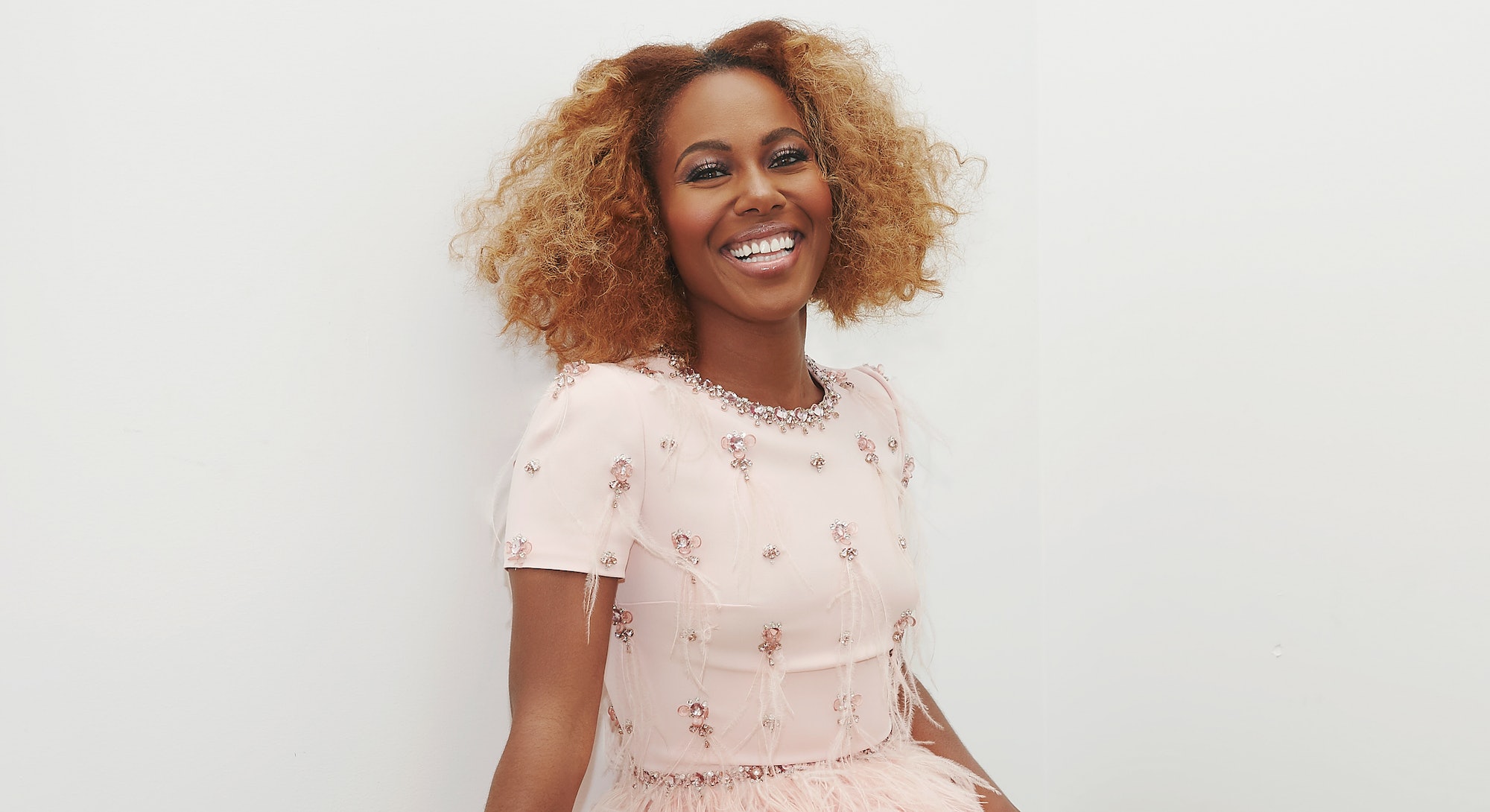 As soon as DeWanda Wise steps into the Bustle offices in New York City, her presence fills the room — and it's not just because she's wearing a feathery, pink statement dress with sky-high neon pumps. Simply stated, Wise is someone who has that natural wow factor.

Her innate ability to command the attention of the entire room might make her seem intimidating to some, yet speaking with her is like chatting to a girlfriend I’ve known all my life. We’re able to quickly bond over our natural hair — with hers being styled into a voluminous, blonde twist-out — and our shared love for the classic MTV series Daria, after she sees the main character featured on my t-shirt. But I soon learn this laid-back demeanor is only one side of Wise's disposition — because when it comes to her craft, she's a force to be reckoned with.

It's clear that the 34-year-old is exceptional at what she does. When she landed her breakout lead role in 2017 as the iconic polyamorous artist-slash-activist Nola Darling in Spike Lee's Netflix series She's Gotta Have It, Deadline Hollywood praised her performance by saying she “hits nothing but high notes,” and The Hollywood Reporter lauded her as a “tremendous discovery.” But while she may have been a fresh talent to critics, for as long as she can remember, Wise has worked to be the best of the best — and she’s damn proud of it.

"When I was four, I wanted to be a singer," Wise tells Bustle, smiling. "I remember being in elementary school and convincing the music teacher to drop the age so I could join choir as soon as possible. Then when I was 11, I wanted to be a therapist, so I was a peer mediator."

But once she discovered acting at 15, Wise's already remarkable drive multiplied tenfold — so much so that she was willing to make sacrifices the average teenager may not even consider. "I broke up with my boyfriend because I was afraid he was going to hold me back," she laughs, clearly still pleased with her choice. "I was that kid who always knew what they wanted to do, and I always did everything possible to make it happen."

Even when it came to her hair, Wise strove for excellence as a child. Despite getting her first Just For Me relaxer at just 4 years old, "I got my hair done every other week, and I would get home and fix it," the Maryland native says. "I was playing around with my face shape super early." However, once she got to college and decided to shave her head to rid herself of the perm, she was finally able to learn about her natural hair, which she wore to all of her auditions.

"It would actually take me more time to style my hair than to actually prepare," she admits. But the additional effort she put into her look was always worth it because, in typical fashion, she wanted to go the extra mile to help normalize Afro hair on-screen. "The spaces we move through dictate hair," she explains. "If you are a black woman in a certain era, in certain industries, you press your hair. But representation is important, it's important to see textures and curls."

This type of representation is just as important behind the scenes, she asserts. Black actresses have long lamented Hollywood hairstylists being unable to work with textured strands, something Wise has experienced first-hand in the early days of her acting career. "I was working on a show, and when I got to set, they just kind of looked at this 4C hair with eyes of terror and tucked [it] in under a hat," she details. But she learned a vital lesson that day: As a black woman working in front of the camera, unlike her white counterparts, she needed to come to work prepared to potentially do her hair herself. "That was the first and only time where I wasn't prepared with a contingency plan," Wise says.

Fortunately, Wise definitely doesn't need to use that contingency plan on the set of She's Gotta Have It, as the show is adept at styling and celebrating natural hair. In the original 1986 film starring Tracy Camilla Johns, Nola Darling is seen only wearing her hair in its natural state. The same is true on the show, however, the character's curls are portrayed in even more adaptable styles. And in Season 2, which premieres on May 24, Wise says that fans can expect to see Nola rocking beautiful box braids throughout each episode.

"I was that kid who always knew what they wanted to do, and I always did everything possible to make it happen."

But She’s Gotta Have It’s celebration of natural hair is hardly the only thing revolutionary about it. Lee's depiction of a black woman's sexual freedom was ahead of its time in 1986, and Nola is perhaps still ahead of the curve even in today's world, despite sexual autonomy becoming increasingly normalized.

"In '86, Spike didn't use the phrase polyamory in the original, but a lot of people were without the label," the actor says, adding that with the rise of online and app-based dating today, she believes more people than ever have multiple partners. Yet Wise, who has been married to her husband and fellow actor Alano Miller for a decade, believes the idea of others dating more than one person at a time is still considered taboo. "I feel like there's a lot of pressure to find the one match, and very little regard for the recognition that matches are made," she says matter-of-factly.

But while Wise may differ from her character in terms of romantic partnerships, when asked who she would choose between her on-screen lovers — Mars, Jamie, Greer, or Opal — she pauses for a few seconds to think. "I would probably be the worst,” she finally responds, trying to hold in her laugh. “I’d continue to see all of them until I met a fifth partner who had all the attributes of all four."

Aside from She's Gotta Have It, Wise also landed a lead role in the Netflix movie Someone Great, which she stars in alongside her longtime friend Gina Rodriguez. The pair originally met at New York University, where they were both enrolled in the school's drama program. Over 15 years of friendship later, Rodriguez helped Wise to land the role in the film, proving the importance of networking within your own circle. "I think people underestimate the power of community," Wise says.

But as far as the future goes for the star, Wise says she has no concrete plans of what she would like hers to look like. "I've always been really open to the twists, the turns, and what life brings," she says. "I think the more your focus is narrowed, you're looking for this one thing to bring you happiness, and you miss the trillion other things that come up in the process."

As someone with a type-A personality, Wise is well aware that she wants to have it all when it comes to her professional triumphs. But she also wants to spread the wealth. She and her husband are currently producing a movie featuring directors and actors they've known for over a decade — not because they couldn’t cast anyone else, but rather because the pair sees the benefit of growing with their circle. "The more you can surround yourself with likeminded people,” she says, “there's really is no way that it won't bear tremendous fruit in the long run." Clearly, her work's not done until her tribe can have it all, too.