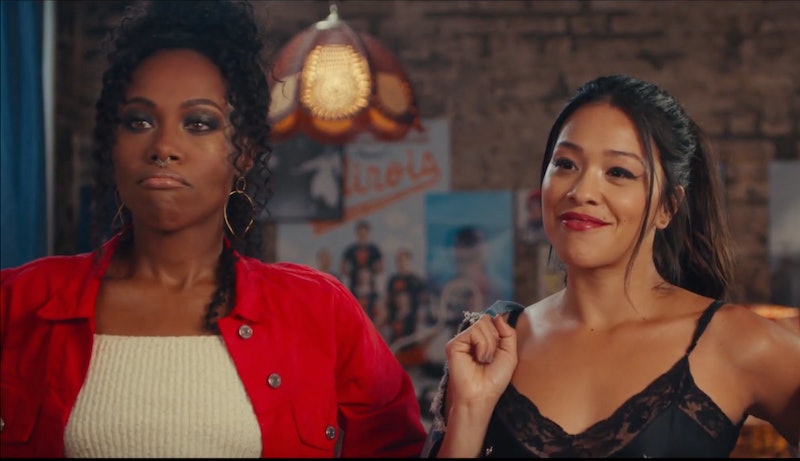 Gina Rodriguez is playing someone great — and no, we don’t mean Jane Villanueva on Jane the Virgin. On Tuesday, March 5, Netflix released the Someone Great trailer, giving fans their first peek at Gina Rodriguez's exciting new role as a rom-com queen who does the opposite of what the usual rom-com leads would do. From the looks of the trailer, Someone Great is a rom-com gone wrong, but in the most encouraging and fun way.

Rodriguez plays aspiring music journalist Jenny, who lives in New York City but gets a job offer in San Francisco that she can’t refuse. Rather than move out West with her or attempt a long-distance relationship, her boyfriend of nine years, played by Sorry to Bother You star Lakeith Stanfield, decides to call their romance off completely.

But rather than focus on the devastating break-up, the movie pivots to her relationship with her two longtime best friends, Erin (DeWanda Wise) and Blair (Brittany Snow), as they try to mend her broken heart with one last outrageous night out in NYC.

Based on the trailer, Someone Great looks like a movie that flips rom-com tropes on its head without making fun of them, like Rebel Wilson rom-com Isn’t It Romantic, but by spotlighting the people in life that really matter: sisters, not misters.

The heartwarming focus on female friendship in Someone Great comes as no surprise given the film’s predominantly female cast and crew. Sweet/Vicious creator Jennifer Kaytin Robinson wrote and directed the film, with Rosario Dawson filling out the cast. Rodriguez herself also took on the role of producer in the film. In fact, she opened up to Elle about working on Someone Great, revealing that she cast Wise because they're actually best friends in real life. “We went to NYU together,” she said. “We’ve known each other since we were 17.”

In the interview, which was published on March 6, the producer and actor sang Robinson's praises, stating that the director's script drew her into the project. "When I read it, I was like, I want in. Jennifer Robinson will be a huge director. She's a leader," Rodriguez said. "She's not nasty. She's kind, she protects the actors. She protects her crew. I am so proud to call her my friend and my fellow artist."

The actress also told Elle about working with Stanfield. “Lakeith was my dream actor to be working with for this. I actually just adore him. I think he's a phenomenal actor," she said. However, Rodriguez made clear that the true meaning of Someone Great is really about female friendship. "But [the movie is] definitely about her and her relationship with her friends, and her relationship with herself," she added. "You know: When do we choose others? When do we choose ourselves? With decisions that aren't easy — when are you willing to make them and why?”

Between the final season of her Emmy-winning show Jane the Virgin, its upcoming spin-off, and the release of her action film Miss Bala, there’s no shortage of Rodriguez on our screens this spring. Someone Great looks like it will fit well within the actress' diverse repertoire and inspire us to have our own wild nights with friends — after watching the movie in the comfort of our homes, of course.