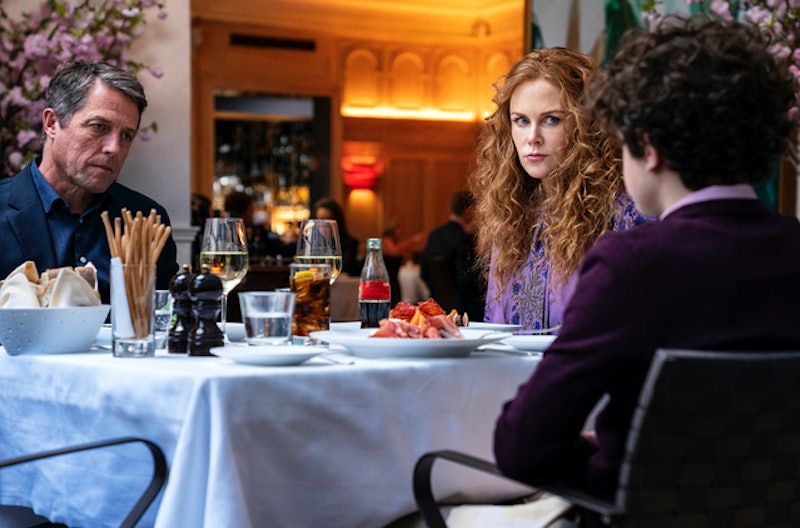 Spoilers for The Undoing Episode 5. Things aren’t looking good for Henry on The Undoing. After urging his parents to be a normal family again (at least once his dad’s murder trial is over), he’s left shocked when his mom finds a sculpting hammer — just like the missing murder weapon — hidden in his violin case during the final moments of Episode 5.

This is an abrupt pivot, given that the show has been trying to paint Jonathan as the leading suspect. But it’s not as if there haven’t been clues that Henry might know more than he’s letting on. When the cops first came to question Grace in the pilot, he was eager to eavesdrop on their conversation. And when they came back to arrest his father in Episode 3, Henry retreated to his room to practice violin, giving his case a long, lingering stare. Later in the same episode, Henry’s violin was seen lying on the floor in his room. As musicians know, leaving your instrument out of its case is a major no-no — unless you’ve got a murder weapon hidden in your case. Then you’ve got bigger problems.

The murder weapon reveal might also explain why Henry has been so obsessed with TV coverage of the trial. The beginning of the Nov. 22 episode revisits Jonathan’s TV interview, in which he says he has some idea about who killed Elena, holding his gaze to the camera. Henry is watching him at school — and he seems sheepish about it when he’s interrupted. He's already been rabidly following the coverage of his father’s trial throughout the show. Could it be that he was interested in the news for his own personal reasons?

That might explain why Jonathan didn’t just name Elena’s husband Fernando as the culprit, but it also creates new questions, like when and how he found out Henry was involved. For much of the series, Jonathan has stressed how much he wants his son to know it wasn’t him, which wouldn’t have been a concern if he already knew Henry had done the deed.

Henry killing Elena also tracks with the DNA evidence. Despite its rep, DNA is not an exact science; familial DNA sometimes gives investigators false leads, meaning Henry’s DNA might have been present at the crime scene but was interpreted as Jonathan’s.

That being said, the episode doesn’t confirm Henry did it quite yet. It still plants a couple seeds of doubt on Grace’s side too — in fact, many of the things that point to Henry’s guilt could also point to Grace’s. Right after Henry squirrels away his phone after watching Jonathan’s interview, Jonathan questions if Grace’s walking patterns are truly random — and she doesn’t provide him with much of an answer.

Susanna Bier, who directed all six episodes of The Undoing, has specifically mentioned that she sought to “venture into somebody's state of mind” and highlight the “confusion” from the book the show is based on, so there may be a twist waiting for us yet. But whichever way you slice it, the Fraser family is looking guiltier than ever.

More like this
'The White Lotus' Costume Designer Explains That Accidental 'Princess Diaries' Moment
By Grace Wehniainen
Everything To Know About 'The White Lotus' Season 3
By Grace Wehniainen
The 'Love, Lizzo' Harry Styles Scene Is Just 1 Moment That Made Fans Feel Seen
By Brad Witter
Everything To Know About 'Magic Mike’s Last Dance' Starring Channing Tatum
By Jack Irvin
Get Even More From Bustle — Sign Up For The Newsletter