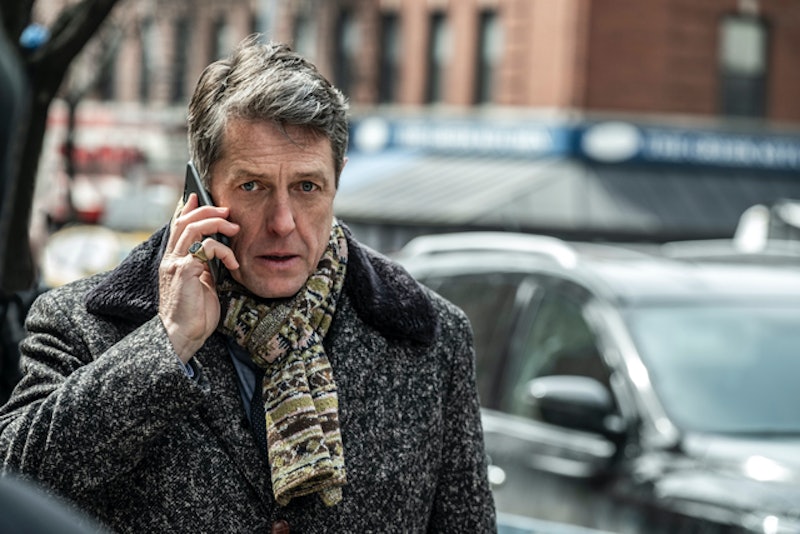 Spoilers ahead for the The Undoing Episode 2. We're only two episodes into HBO'sThe Undoing, and Jonathan is looking guilty AF. Just as fast as he left town after Elena's murder, he's returned to assert his innocence, telling Grace that he and Elena did have an affair but insisting he didn't kill her.

The sequence of events isn't looking good for him. He says that after the fundraiser, he went to Elena's studio to confront her because he felt she was getting too close to Grace. They argued and then had sex, after which he went to a bar to collect himself. When he returned, he claims Elena was already dead. But instead of calling the cops like a rational person, he decided to go home and have sex with Grace before fleeing the next morning. God grant us all the confidence of a rich white man who believes his wife might buy all of that after he both betrayed and lied to her.

Naturally, Grace calls the cops, and that's where the episode leaves us. It's clear we're meant to think that Jonathan killed Elena, and that's certainly what all the evidence suggests. But as some fans have pointed out on Twitter, Jonathan being the killer would be way too obvious. So let's weigh the odds.

The Case For Jonathan Killing Elena

The biggest reason why Jonathan probably killed Elena is because that's what happens in You Should Have Known, the book The Undoing is based on. In it, Jonathan sends Grace a letter in which he confesses to murdering Elena (named Malaga in the book) in order to cover up their affair. That seems to align with the show so far, given that Jonathan did indeed have an affair with Elena and that he then skipped town. He also has the motive, means, and opportunity to have done the deed. But there's one big change: in the book, Jonathan never comes back to town.

The Case for Jonathan Not Killing Elena

Such a big change so early on in the show suggests HBO's iteration of the story will continue to deviate from the book, and the Undoing's team has been clear that that's their plan."The best you can do with a good book, if you want to dramatize it on screen, is do something else with it," Undoing director Susanna Bier told Oprah magazine. "By doing that you maintain the actual qualities of the book. But you create something that is possibly different and something in its own right."

It's possible they'll keep the same ending, but if Jonathan did kill Elena, why would he come back? The police had no idea where he was, so he could have potentially gotten away with it. Even if he just wanted to try to clear his name, it seems too risky.

If Jonathan didn't kill Elena, who did? Elena's husband is rumored to have an alibi, but there were also rumors that he fled town and then turned himself in. Perhaps he and Elena were having marital problems and he found out about her affair and killed her. He would have known where her studio was and could have followed her there, seen Jonathan leave, and gone inside to exact his revenge.

Or perhaps Grace was more involved than she's letting on.

Grace claims to have had no idea about the secrets her husband was keeping, but during her police interrogation, she seemed like she may have known about the accusations against him at the hospital. She was quick to dismiss his inappropriate relationship with a patient's mother (who turned out to be Elena) as Jonathan just being a warm and caring doctor. Maybe she helped him kill Elena to save their marriage, or maybe she followed Jonathan to Elena's studio that night, saw the two of them together, and killed Elena when Jonathan left. In the second episode, she keeps having visions of Elena's last moments as if she was there for them. Maybe she was drunk or in a fugue state and doesn't remember what happened.

Another potential suspect is Grace's father. In the book, Jonathan borrows money from Grace's dad to help get Elena's son into Reardon. If the same is true in the show, Grace's father may know about Jonathan's affair, and perhaps he took matters into his own hands to "save" his daughter's marriage. In the second episode, her dad seems to already suspect that Grace and Jonathan's relationship wasn't as strong as she believed it to be — it's the first thing he asks about when he learns that Jonathan is missing. He's also worried about Grace talking to the police, perhaps in case she accidentally incriminates him. The synopsis for the fourth episode says that her dad "uses his resources to help his family." He has a lot of resources financially and otherwise, and he might have used them to kill Elena, whether by his hands or someone else's.

More like this
Melanie Lynskey Plays A “Ruthless Leader” In 'The Last Of Us'
By Brad Witter
Linda Ronstadt’s “Long Long Time” Plays A Pivotal Role In The Last Of Us
By Brad Witter
Here’s What Happens To Bill & Frank In 'The Last Of Us' Video Game
By Brad Witter
'Succession' Season 4 Will Be An "Absolute Banger" According To Cousin Greg
By Bustle Staff
Get Even More From Bustle — Sign Up For The Newsletter
From hair trends to relationship advice, our daily newsletter has everything you need to sound like a person who’s on TikTok, even if you aren’t.