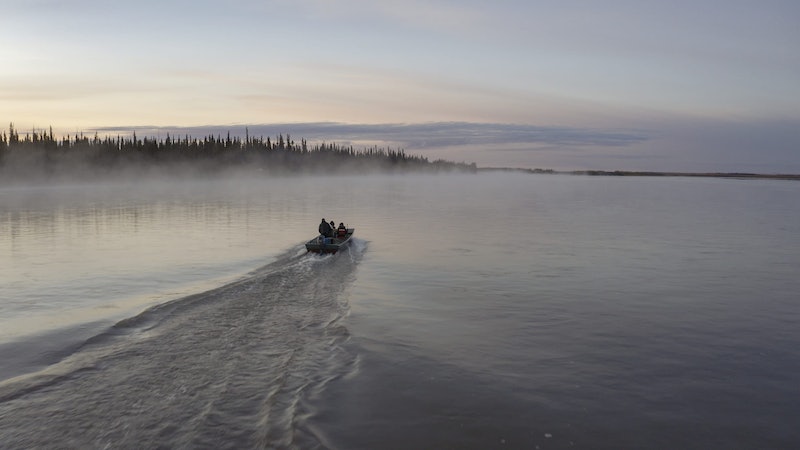 Picture this: it’s the end of a work week that seemed like it lasted an entire month, and you’re finally free to kick back, relax, and spend as much time on your couch as humanly possible. It sounds like the perfect scenario… until you realize that you now have to find something to stream that will keep you hooked without stressing you out. Well, Disney+ and National Geographic have the perfect solution, and it’s called America the Beautiful.

America the Beautiful is the latest National Geographic series to premiere exclusively on Disney+, but this one is different from the award-winning Planet Earth, Frozen Planet, and Disneynature films you may have seen if you’re already subscribed to the streaming platform. This soothing nature docuseries is one you’ll probably watch over and over because it’s narrated by Michael B. Jordan. Yes, really. An entire docuseries full of gorgeous nature footage narrated by People’s “Sexiest Man Alive,” pretty much sounds like something you’d only encounter in your dreams, but with a Disney+ subscription, it is a reality.

America the Beautiful premieres exclusively on Disney+ on July 4, and features the “jaw-dropping story of our homeland and its amazing animals.” As the series trailer points out (check it out, below), North America is the most naturally “diverse and extreme” continent on Earth, and this project is a celebration of that. From deserts to icecaps and all climates in-between, America the Beautiful explores all of the regions in the country, giving viewers a new perspective on the land they call home. (While Michael B. Jordan teaches you about nature. This fact simply cannot be overstated enough.) The series also used new remote cameras and gyro-stabilized cameras to capture never-before-seen animal behaviors, so even the most avid National Geographic fans will have something new to spot.

In addition to the natural wonders of the United States, this six-episode series features the conservation heroes who are working to preserve the beauty of the country’s wildlife, as producers worked directly with Indigenous tribes, including the Gwich’in people of Alaska and the Chippewa Cree of Rocky Boy Reservation in Montana. The series also highlights America’s diversity with an impressive musical score performed by a variety of talented artists from a variety of backgrounds.

America the Beautiful, the six-part docuseries, is available to stream on Disney+ on July 4.

More like this
How Marvel’s 'She-Hulk' Changes Her Comic Book Origin Story
By Brad Witter
Here’s When 'She-Hulk' Takes Place In The MCU
By Brad Witter
At 14, Tatiana Maslany Was Obsessing Over Tamagotchis & The Spice Girls
By Gabrielle Bondi
Who Is Tatiana Maslany Dating? The 'She-Hulk' Star Is Married To 'A Locke & Key' Actor
By Radhika Menon
Get Even More From Bustle — Sign Up For The Newsletter