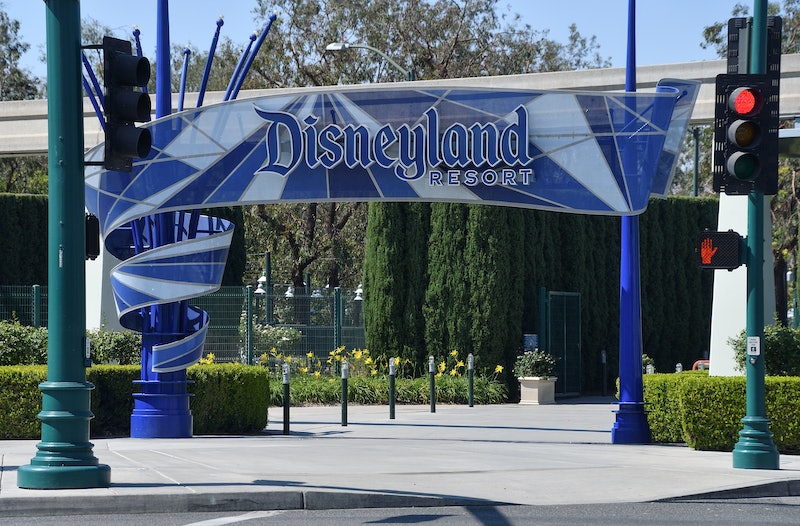 About seven months after the Anaheim, California theme park closed its gates in the wake of the novel coronavirus pandemic, Disneyland Resort employees and parkgoers staged a rally on Saturday, Oct. 17, urging Governor Gavin Newsom to issue a reopening order. CBS Los Angeles reported that about 40 people had congregated under the Disneyland sign by 8 a.m. PT. Most attendees wore masks and maintained social distancing, and some held "Not happy" signs while chanting such phrases as "Open Disneyland."

Both Disneyland and Universal Studios Hollywood have been closed since mid-March, though shopping and dining districts have been open since the summer. In late September, Disney announced it would lay off more than 28,000 employees across its parks, experiences, and consumer products division. At the time, Josh D'Amaro, the company's head of parks, cited "the State's unwillingness to lift restrictions that would allow Disneyland to reopen,” for exacerbating their financial hardships.

"The cast members have always been here to support us and make us have a good time and we need to support them," frequent Disneyland visitor Jennifer Grafius said in an interview with the local CBS affiliate. "It's our turn to be out here hitting the pavement to get their jobs back."

California state officials visited the Disneyland Resort and Universal Studios Hollywood earlier this week, as Newsom considers issuing guidelines to allow the parks to reopen, according to The Hollywood Reporter.

Since Florida's Disney World reopened in July, there have been no reported COVID-19 outbreaks among workers or guests linked to the Orlando-area park, according to public health officials and Disney World's unions. Disney declined to say how many Disney World employees had tested positive for the coronavirus since the resort reopened, though union leaders said cases had been minimal.

Another Anaheim rally attendee, Jessica Grafius, added that "if Walt Disney World can open safely, so can we," highlighting safety measures such as the use of masks and social distancing. It's worth noting, however, that Disney World hasn't completely avoided financial woes amid the coronavirus crisis. The park recently began laying off 15,550 workers, or 20% of its work force, due to low attendance and uncertainty about the duration of the pandemic, per The New York Times.

On Oct. 14, Massachusetts Senator Elizabeth Warren sent a letter to Disney Executive Chairman Bob Iger and Chief Executive Bob Chapek, criticizing the layoffs, the Los Angeles Times reported. "It appears that — prior to, and during the pandemic — Disney took good care of its top executives and shareholders — and now is hanging its front-line workers out to dry," Warren wrote, per the newspaper. Disney responded with a statement calling Warren's letter "misinformed."

There is growing impatience to reopen California's theme parks. While the California Attractions and Parks Association released a statement on Oct. 12, calling it "heartening" that Newsom had indicated his willingness to work with the industry, the organization launched a website days later with a petition calling for him to "stop delaying." The CAPA petition also urges him to "please develop reasonable and fair guidance ... to reopen soon." The governor previously cautioned that he's in "no hurry" and explained the state is researching "the viability of reopening the theme parks sooner rather than later."

More like this
You Definitely Know The Voice Of Shuri's AI In 'Black Panther: Wakanda Forever'
By Brad Witter
What Jen Shah's Delayed Sentencing Could Mean For The 'RHOSLC' Season 3 Reunion
By Brad Witter and Jake Viswanath
'Bridgerton' S3 Teases Exciting Social Season For Penelope Featherington
By Bustle
'Avatar 2' Now Has A Teaser Trailer & Release Date
By Jack Irvin and Alyssa Lapid
Get Even More From Bustle — Sign Up For The Newsletter