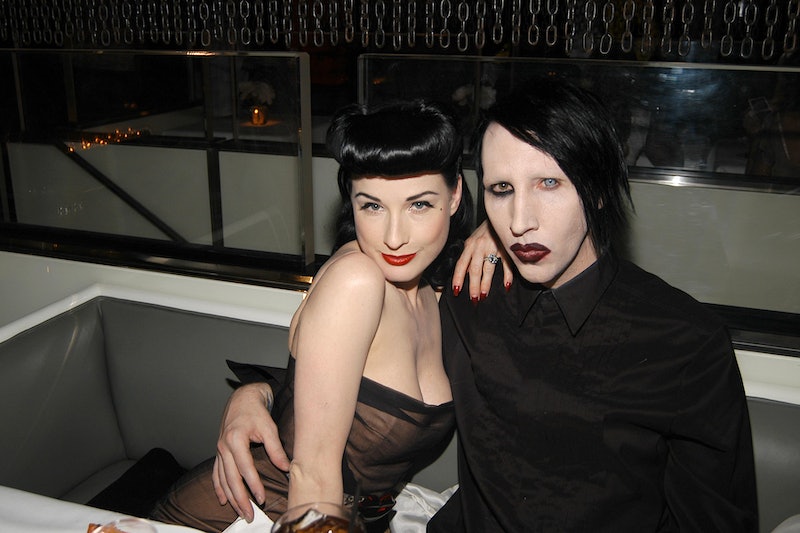 Days after Marilyn Manson was accused by several women of abuse and coercion, Dita Von Teese responded to the allegations made against her ex-husband. On Monday, Manson's ex-girlfriend Evan Rachel Wood named the provocative rock singer, born Brian Warner, as her abuser in an Instagram post. "He started grooming me when I was a teenager and horrifically abused me for years," she claimed. "I was brainwashed and manipulated into submission."

Days later, Von Teese took to her own Instagram to respond, saying that she has been processing the news. "To those that have expressed your concerns for my well-being, I appreciate your kindness," the burlesque performer wrote. While she didn't defend Manson or deny Wood's story, Von Teese made it clear that she did not go through any abuse during her relationship with Manson. "Please know that the details made public do not match my personal experience during our seven years together as a couple," she wrote. "Had they, I would not have married him."

Von Teese went on to encourage survivors of abuse to do what they can to heal from their experiences. "Abuse of any kind has no place in any relationship," she wrote. "I urge those of you who have incurred abuse to take steps to heal and the strength to fully realize yourself."

On Feb. 1, Manson also took to Instagram to deny all accusations from Wood and several other women who had posted stories of alleged abuse from the singer. "Obviously my art and my life have long been magnets for controversy," he wrote in a statement. "But these recent claims about me are horrible distortions of reality. My intimate relationships have always been entirely consensual with like-minded partners. Regardless of how - and why - others are now choosing to misrepresent the past, that is the truth."

After several years of dating, Von Teese married Manson in November 2005 before splitting one year later, and Wood started dating Manson soon after the split. In her statement, Von Teese said that she left him "due to infidelity and drug abuse." As reported by Entertainment Tonight, Von Teese's response Wednesday came hours before the Los Angeles Police Department were called to Manson's home for a wellness check. An LAPD spokesperson told the outlet that there was "no evidence of any trouble."

In 2007, Von Teese opened up about the aftermath of her then-recent divorce from Manson in an interview with Harper's Bazaar. "I loved him, and this was the most painful thing I have ever had to go through," she said at the time. However, in 2016, Von Teese said that the former couple were able to make up and become friends. "I can speak fondly about him now," she told Khloé Kardashian on Kocktails With Khloé. "If you would have asked me four years ago, I would have shut it down. But we're friends now and it's fine."

More like this
Hilary Duff's Husband Matthew Koma Has Her Name Tattooed On His Butt
By Jake Viswanath and Stephanie Downs
5 Wild Theories About Miley Cyrus’ “Flowers” Music Video
By Jake Viswanath
Britney Spears Shares & Deletes Photos Of Justin Timberlake From 22 Years Ago
By Jake Viswanath
Harry Styles Is Performing At The 2023 Grammy Awards
By Jake Viswanath
Get Even More From Bustle — Sign Up For The Newsletter
From hair trends to relationship advice, our daily newsletter has everything you need to sound like a person who’s on TikTok, even if you aren’t.