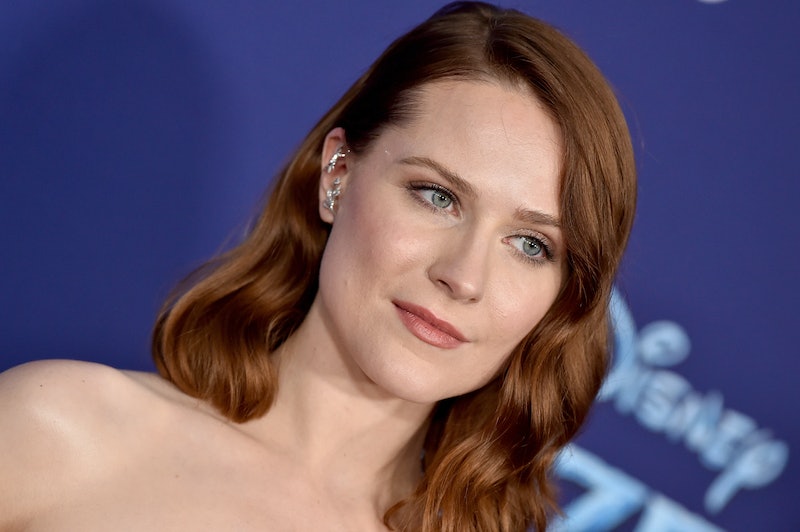 Evan Rachel Wood has openly discussed experiencing abuse for years, but had never named the perpetrator, until now. In a note posted to Instagram on Monday, Feb. 1, Wood named former fiancé Marilyn Manson as her alleged abuser; at least four other women have also come forward in solidarity with Wood, making similar allegations of abuse against the provocative rock singer. Bustle has reached out to Manson's representatives for comment but did not receive an immediate response.

In her post, the Westworld star alleged that Manson, born Brian Warner, had been abusive to her throughout their three-year relationship. Wood and Manson went public with their relationship in January 2007, when she was 19 and he was 37, although Wood has stated that they met when she was 18. They got engaged in January 2010 before splitting months later.

"He started grooming me when I was a teenager and horrifically abused me for years," Wood wrote. "I was brainwashed and manipulated into submission. I am done living in fear of retaliation, slander, or blackmail. I am here to expose this dangerous man and call out the many industries that have enabled him, before he ruins any more lives. I stand with the many victims who will no longer be silent."

On her Instagram story, Wood also shared posts from four other women, all of which detail harrowing incidents of alleged abuse from Manson, including coercion, sexual assault, and threats of physical violence. Some women also provided screenshots of alleged text messages from Manson to support their claims.

Later on Feb. 1, Manson denied all accusations in a statement posted to Instagram, without mentioning Wood or his other accusers by name. "Obviously, my art and my life have long been magnets for controversy, but these recent claims about me are horrible distortions of reality," he wrote. "My intimate relationships have always been entirely consensual with like-minded partners. Regardless of how ― and why ― others are now choosing to misrepresent the past, that is the truth."

Wood has previously been open about experiencing abuse, but had never disclosed her alleged abuser's identity until now. In February 2018, Wood testified in front of Congress and described her own experience with sexual assault in an attempt to get all 50 states to pass their own version of the Sexual Assault Survivors' Bill of Rights Act. "My experience with domestic violence was this: Toxic mental, physical and sexual abuse which started slow but escalated over time, including threats against my life, severe gaslighting and brainwashing, waking up to the man that claimed to love me raping what he believed to be my unconscious body,” she said at the time.

In 2011, Manson was accused of an unspecified sexual assault, but the case was dropped years later. In a 2009 interview with Spin, in reference to Wood, the singer said that he had "fantasies every day about smashing her skull in with a sledgehammer." However, in November 2020, Manson's rep dismissed the statement as "obviously a theatrical rock star interview promoting a new record, and not a factual account."

EDITOR'S NOTE: A previous version of this article misstated Manson's age when he dated Wood. It has since been corrected.