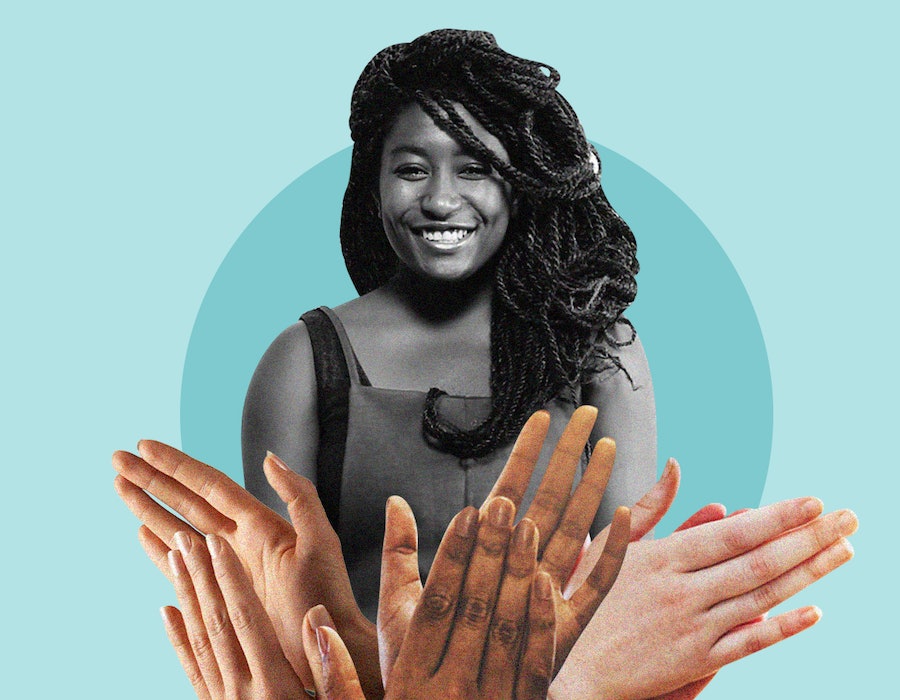 Welcome to Do It For The Applause, a series in which we ask performers, writers, business leaders, and public figures to think about the notion of applause and what it means to them. Today, we hear from writer and comedian Sophie Duker.

When I call Sophie Duker early on a February morning, she’s battling bad signal at London’s National Theatre. Despite its central location, the Brutalist building is a notorious dead zone, and our conversation stops and starts until Duker finds a windowsill to stand on. Once we get chatting, Duker starts by telling me her experience working at the theatre's neighbouring landmark, the London Eye.

“I used to just look down at the National and be like ‘I should be on the stage,’” she laughs, “but instead I was a flight attendant — I think that’s what they call them — watching people propose.”

After a few years of working the comedy circuit, putting on improv shows with friends, and performing upstairs at pubs, Duker has landed exactly where she wanted to be. Well, kind of. She’s not on the National’s stage yet, but she’s sitting in the expansive lobby working on TV scripts.

Duker writes a lot of scripts — for herself and others (including comedic giants like Frankie Boyle). Her work in front of the camera has seen her serve as a panelist on show such as 8 Out Of 10 Cats and Mock the Week, while her stand-up comedy night, Wacky Racists, sells out in venues across London. Duker is a busy woman, but, of the work she's produced, what is she most proud of?

“It's really hard to be like, ‘This is the point where I achieved something and I made it,’ but I'm really proud that I've made a whole show,” she says, referring to Venus, her 2019 stand-up show that saw her nominated for Best Newcomer at the Edinburgh Fringe.

Speaking more specifically about TV, she adds: “I really like that I’ve come full circle. I've been a runner on shows, I've been the person getting shouted at for not bringing the right sandwiches. And now I’m on the shows.”

Comedians, I’ve always thought, must have a particularly unique relationship with applause. They can measure the success of their work instantaneously. If they’re good, people laugh. If they’re not? Silence.

The level of self-belief and determination it takes to succeed in this environment isn't lost on Duker. "[Women] don't get the first laugh, so you have to believe that what you're saying is funny," she explains. "Because if you wait for confirmation of it from other people, you won't necessarily get it.”

I reckon if you can get an actual child to clap you, you’ve made it. Kids are savage, so if you make them a group of them applaud, you must be magic. I want that Tinkerbell energy in my life, but I don’t know if I’m good enough yet for kids to dig my gags on racial politics and lesbian pornography.

I like public displays of affection. Don’t big me up in a DM. Shout it from the literal rooftops. Do it in the supermarket aisle, on the top floor of a bus. Tell me I’m your WCW in the ladies’ toilets.

Anything involving the involuntary explosion of bodily fluids, specifically tears or pee.

We’ve all seen Mean Girls. That bit where Regina George tells a girl that she’s, like, really pretty and the girl takes the compliment like a champ and then the temperature in the room drops about twelve thousand degrees and Regina goes “So you agree? You think you’re really pretty?” THAT.

I’m not picking one, fight me. Big Mouth regularly run fucking amazing comedy parties for charitable causes, Sian Docksey is a superb alternative comic trying to infect the mainstream with passionate queer and sex-positive politics. And Saima Ferdows is a producer and director engaging with a huge swathe of comics in a way that the bigwigs don’t tend to.

More like this
Everything To Know About The 'Daisy Jones & The Six' TV Series
By Maxine Harrison and Brad Witter
'Brookside' Is Coming Back & Soap Opera Fans Are Going Wild
By Sam Ramsden
These 5 Words In 'The Last Of Us' Ep 2 Have A *Major* Impact In The Future
By Sophie McEvoy
This Dark 'Happy Valley' Theory Is Staring You Right In The Face
By Sophie McEvoy
Get The Very Best Of Bustle/UK
Sign up for Bustle UK's twice-weekly newsletter, featuring the latest must-watch TV, moving personal stories, and expert advice on the hottest viral buys.