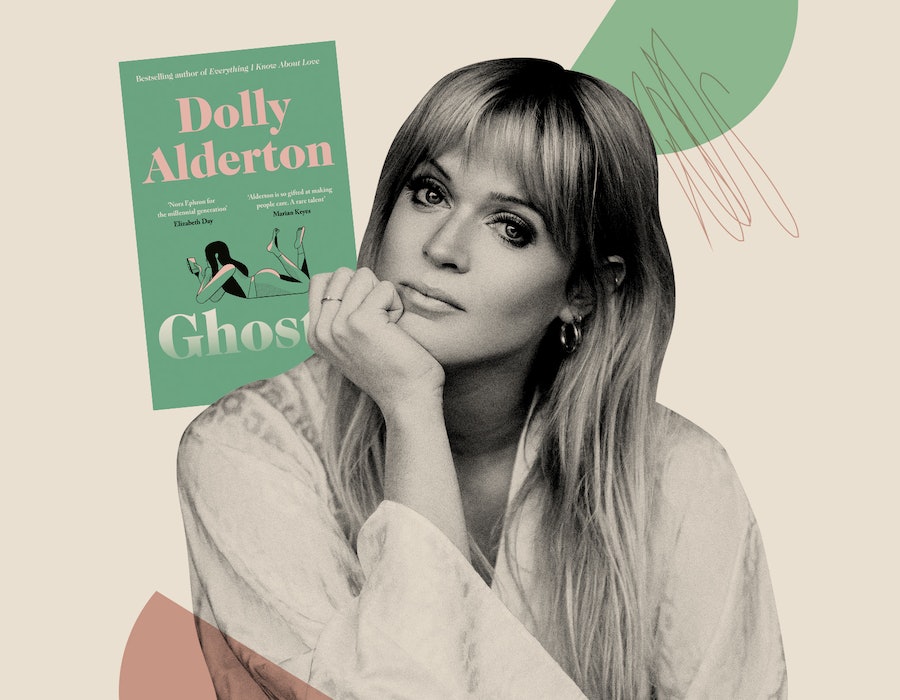 Dolly Alderton's ability to capture the anxieties and ambitions of her generation with both style and humour have made her a firm favourite among millennials. Through her tell-all dating columns for Sunday Times Style to her bestselling memoir, Everything I Know About Love, and cult podcast, The High Low, Alderton has amassed a legions of fans, all ready and waiting for her debut novel, Ghosts – out now.

"My first book was all my good stories," Alderton tells BBC News. "I had a particular story to tell. And that was also a thematic story that fit neatly into a memoir, which was a story about growing up. But also, I just don't want to write about my personal life anymore, I have neither the inclination nor the strength to do that."

With Ghosts, Alderton puts her relationship-dissecting skills to good – and somewhat unexpected – use. The novel's title implies a link to ghosting, that cruel but all-too-common dating trend we all know and hate. While protagonist Nina Dean does deal with her fair share of romantic ghosting, the novel is less about dating and more about how friendships and relationships change in your thirties; when friends drift apart as priorities change, and all the people you've known or relied upon your whole life suddenly become unrecognisable. It's about how our relationships, romantic or otherwise, are so often determined by our imagination and memories; by the spectres we create in our minds and hearts.

That's not to say it's all doom and gloom. There's plenty of laughs and spades of hope baked into the narrative. Nina Dean is as relatable as she is likeable. A successful food writer (a nod to Nora Ephron, who Alderton idolises), she owns her flat in Archway, and has a gaggle of friends who are all going in different directions. After two years of being happily "inactively single," Nina downloads a dating app, Linx, and enters the dodgy world of online dating. In this excerpt from Ghosts, she skewers the tropes of dating profiles with wit, insight, and classic Alderton humour. Like the rest of the book, it is a true joy to read. Enjoy.

Dolly Alderton's debut novel, Ghosts, is published by Fig Tree and out now.

The more men I saw, the more I pieced together categories of humans that I never knew existed. There were the men who were incredibly excited about the fact they’d once been to Las Vegas. There were the guys who were obsessed with the fact they lived in London, which made me nervous that they would forgo a pub or bar for a first date and instead choose hiking up the Millennium Dome or abseiling down the Natural History Museum. I kept seeing Festival Man – a bloke who worked in IT by day, wore glitter on his face by night; who saved up all his holiday allowance to go to five festivals a year. There were the men who lived on canal boats, enjoyed fire poi, had had a taste of harem pants and looked like they wanted more. There were the hundreds of men who feigned indifference to being on Linx – some of whom said their friends had made them do it and they had no idea why they were there, as if downloading a dating app, filling in a profile with copious personal information and uploading photos of yourself was as easy to do by accident as taking the wrong turning on a motorway.

There were the men who wanted you to know they’d read and continued to read a lot of books, and not just the ones by Dan Brown – real ones, by Hemingway and Bukowski and Alastair Campbell. There were graphic designers – Jesus, there were so many graphic designers. Why had I only ever met a handful of graphic designers in real life and yet I had seen at least 350 of them on this dating app?

The saddest category I’d noticed was the Left-Behind Guys. They would not have been aware that they gave off any particularly melancholic personal brand, but they did. They were normally in their late thirties or early forties, with big grinning faces betrayed by their half-dead eyes. Photos showed them giving a best man’s speech or reverently beholding a friend’s baby during a christening. Their fatigue and longing were palpable. They came up, on average, every ten clicks, and each one broke my heart afresh each time.

The most simultaneously reassuring and unsettling discovery I made in those first few intense weeks of compulsive right- and left-clicking on Linx, was just how unimaginative humans are. None of us would ever fully grasp the extent of our magnificent unoriginality – it would be too painful to process. I-like-the-outdoors-also-like-the-indoors-I-love-pizza-I’m- looking-for-someone-who-can-make-me-laugh-I-just- want-someone-to-come-home-to-and-feel-wriggling-next-to-me-in-the-middle-of-the-night unoriginality. There was the evidence, in all these profiles, where who we really are and who we’d like everyone to think we are were in such unsubtle tension. How clear it suddenly was that we are all the same organs, tissue and liquids packaged up in one version of a million clichés, who all have insecurities and desires; the need to feel nurtured, important, understood and useful in one way or another. None of us are special. I don’t know why we fight it so much.