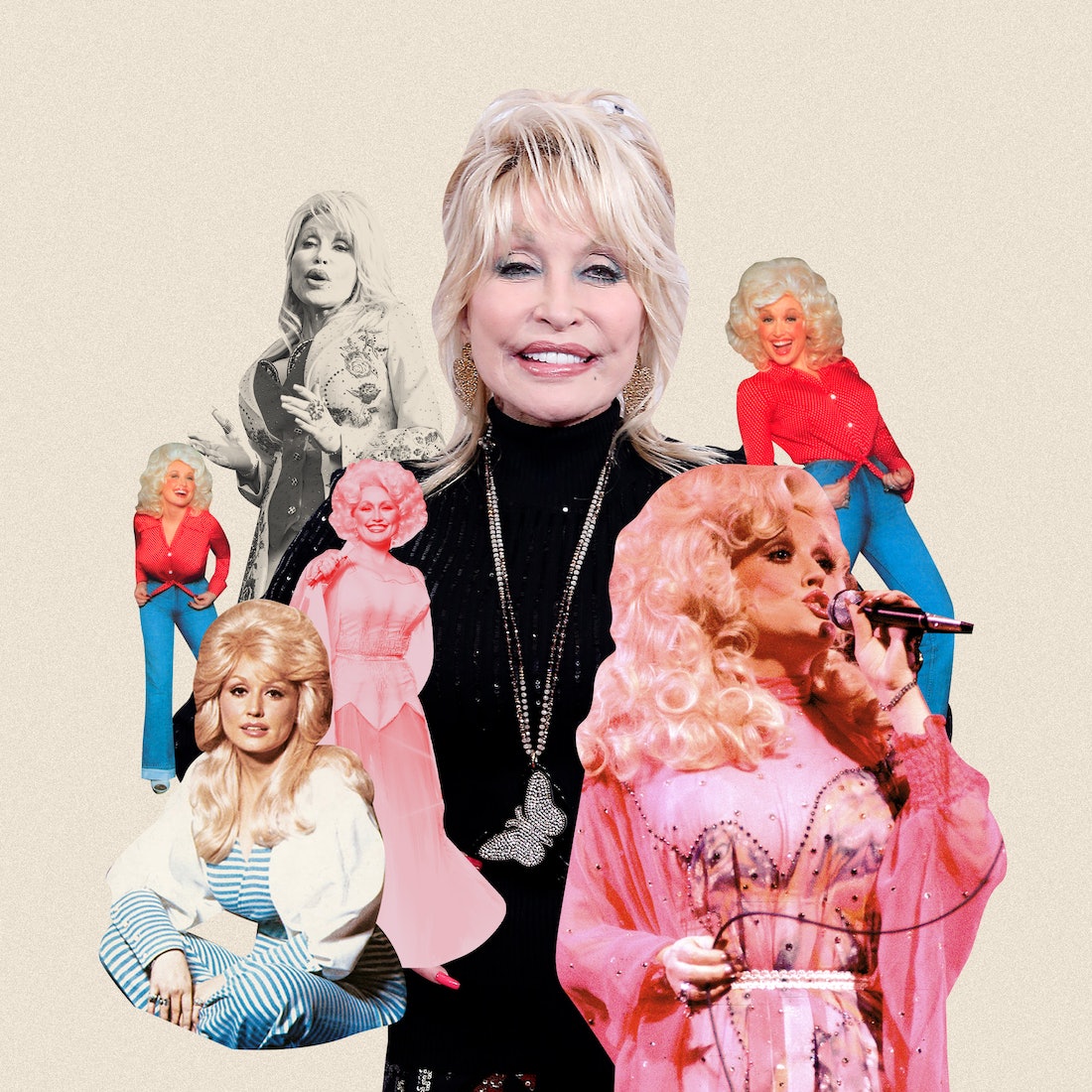 If you are gifted 15 minutes with Dolly Parton, there are worse ways to spend it than asking for career advice. At 76, Parton is still taking on a dizzying number of new projects — by March of this year, she’ll have already come out with her own ice cream flavor (Strawberry Pretzel Pie from Jeni’s), a thriller novel (Run Rose Run, co-written with James Patterson) and a companion album, plus a line of cake mixes from Duncan Hines.

That last collab is the official reason Parton spoke to Bustle this week. (“I’ve claimed many a Duncan Hines cake and acted like I made it from scratch,” she said of the banana pudding and coconut mixes, both of which have already sold out. “We all do that, don’t we? When your mother-in-law comes over?”)

But the iconic country singer — please note the rare correct usage of the word “iconic” — was kind enough to answer our questions about a range of subjects, including her tireless work ethic, her thoughts on burnout, and her empathy for Taylor Swift this week as a fellow woman songwriter.

I know it hasn’t always been easy being a woman in the male-dominated music industry. It still isn’t easy: Earlier this week, a songwriter named Damon Albarn accused Taylor Swift of not writing her own songs. (She defended herself on Twitter.) What are your thoughts on how all that unfolded?

I didn’t see it, but I did hear about it. And I know that is not true that she does not write her own songs. I know for a fact Taylor Swift writes. She’s been doing that since she was young.

She may have written some songs here and there with somebody. But I guarantee she did her part on it. And there may be some co-written songs that you don’t write as much on, or whatever. Maybe you had the melody and a few lines and then somebody else finished it.

I don’t know, I don’t write that much with that many people. I don’t like it, for that very reason. I don’t want somebody saying that they wrote more than me — and I don’t want to feel like, if I did, that they’re taking all the credit. Songwriting to me is very personal.

But Taylor is very smart. She’s very creative. She’s very intelligent about herself, about how to market herself and all. So like I said, I didn’t see her response or nothing, but I know she was busted with that — mad, hurt, angry, and embarrassed by it.

Can you think of a time someone criticized you for something, and it felt wrong or untrue? How did you manage your mental health afterward?

Oh, it never bothered my mental health. It just pissed me off.

And hurt my feelings. It hurts your feelings more than anything, especially when you’re a sensitive, caring person. Like with reviews — sometimes these reviewers can be pretty cruel. And it hurts to be criticized. We all want to be loved, and we all want to be appreciated.

But sometimes, somewhere inside me, I knew that maybe they had a point. And you don’t wanna hear that. You’d like to think everybody loves everything you do. But you need to not jump to conclusions too fast. You need to think about what they said, and see if there’s some truth in it, so you might apply it to the next project, so that you can do better.

And sometimes, some people really do just want to hurt you. I don’t know what kind of grudges they have, or whatever. But you can’t worry about them. You just kinda forgive ‘em, cry, and move on.

You’re a famously prolific songwriter. Has anyone ever accused you of not writing your own music?

Oh, I’ve been sued over it. A couple times!

When I wrote “9 to 5,” there was a couple in California, and they had written this song, and they were selling it on cassettes in, like, health food stores. And they had a song on it that had something about working 9 to 5, or a 9 to 5 job, or whatever — it wasn’t like my song, but they talk about working 9 to 5. But I didn’t know them. I’d never been in a health food store at that time, either!

And they sued me. We went to court, the jury played the songs, compared them and all that. Of course, the jury was out on it in just a few minutes.

But that was really an embarrassment. So I know how Taylor feels. It was embarrassing, it was so degrading, to be in a court of law. And they didn’t win at all, but it hurts, it’s hurtful. It’s an embarrassment.

You’ve used the word “embarrassment” a few times. What was embarrassing about it?

But you just write. You get back to work.

You’ve always been a hard worker — I read you get up at 3 a.m. these days! I’m curious if you’ve been hearing the conversation around burnout in the last few years, and what you might have to say about that. Have you ever experienced burnout?

I never felt burned out from my career. ‘Cause I love what I do. It’s really my hobby as well as my job. I always say it’s my joy and my job. I’ve just been lucky like that. I don’t have that same thing that I hear a lot of people talk about, burnout.

There are times that I physically have been worn out. But I’ve never had writer’s block. I remember one time I was working on a project and I was kinda sick, and I was worrying more about how I felt, and trying to get myself back together — I couldn’t be creative. But that’s not writer’s block, that was just a physical thing.

What was going on then, do you remember?

It was when I was working on Best Little Whorehouse in Texas. I was writing some extra songs for that. I was physically sick, I had — well, I don’t remember now. I was just feeling bad and having some trouble getting myself back together. And I just couldn’t focus on being that creative.

Oh, I got it done. I don’t mean that I had a big burnout. I just meant, that’s the only times that I’ve not been able to complete my work, if I’m physically sick.

But for the most part, I just keep on working.

What do you do on your days off to restore yourself? A lot of people took up baking during the pandemic as a stress-reliever.

I try to make myself not write. You know, not work. Because I do love to do that.

But I’m always writing down ideas. And I love to read and visit my little nieces and nephews, hang out with my husband, go on a picnic. Just simple, peaceful things.

For me, most of the time during the whole pandemic, I did as much work as I ever did. And more, in ways. Voiceovers, wrote songs, I read books to children at night — just things to uplift people and make the time pass a little better, a little faster.

But yeah, people got into baking, and people got into cooking. I admired that — that people were actually doing something that was constructive rather than just laying around bitching.

That makes me want to come back to your work ethic. I don’t know if you’ve heard people talk about the so-called “Great Resignation,” but I’m curious: How have you known across your career when to keep working at something, and when to walk away, because you know you’re worth more?

I try not to get myself in too many situations where I’m not able to walk away. I would never walk out of a contract, a binding contract that I had signed. But there are times where you think, Well, this is not good, but I’m just going to make the most of it. So when those kinds of things happen, I just try to keep as good an attitude as I can, do the most work that I can, and not try to get caught up in the turmoil going on around the project.

Don’t sell your soul to nobody. That belongs to God and you. You’ve just gotta weigh everything, whatever the situation is, and think about — is it worth it to you? Because usually, with most things, you’ll have a pretty good idea.

When I did The Best Little Whorehose in Texas, everybody said, Oh, you can’t do that. This’ll ruin you, this’ll be the worst thing you could ever do. So I prayed on it, I thought about it, and I thought, You know what, this is a really good opportunity to do a role outside myself, but something I relate to. I had just done the 9 to 5 thing — I’ve never been a secretary, but I loved doing that. And I thought I’d make a better whore than I did a secretary!

You just have to make those decisions based on who you are. Don’t ever sacrifice your principles and values for a job.