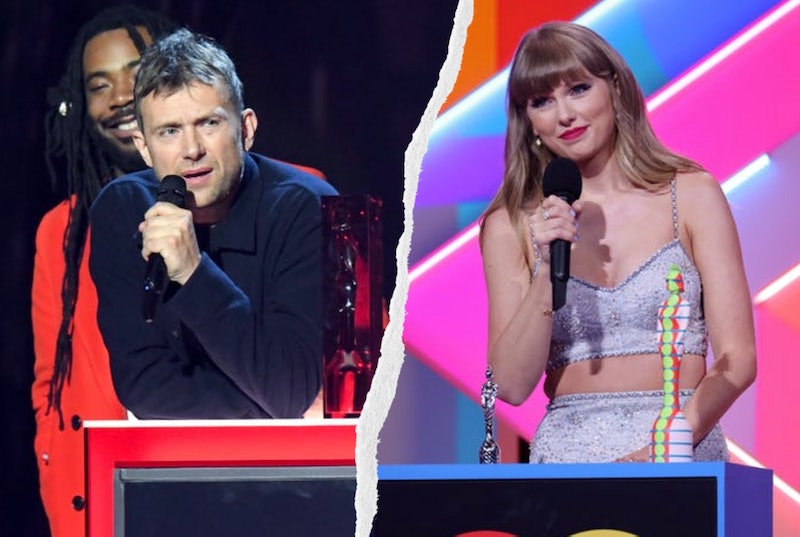 Part of the fun of being a Swiftie is spending hours decoding lyrics, figuring out who exactly she alludes to à la blind item in song — especially when it comes to her romances — or whose baby she namechecks. And when it comes to standing up for her work, fans can rely on Swift to call people out publicly, pointedly, and swiftly. (Never forget when she addressed Scooter Braun and the music industry’s double standards via Twitter and her 2019 Billboard Woman of the Decade acceptance speech.) On Jan. 23, the “All Too Well” singer, 32, found herself having to defend her work again.

This time, the critique came from Damon Albarn, 53, the lead singer of rock bands Blur and Gorillaz. In a new interview with the LA Times, Albarn spoke about how modern artists merely rely on “sound and attitude.” When he challenged the interviewer, music critic Mikael Wood, to come up with artists who don’t, Wood offered Swift as an example of an “excellent songwriter.” Albarn’s unflinching response was: “She doesn’t write her own songs.”

The interviewer countered that “of course she does,” adding that she co-writes “some.” But Albarn was adamant in his response, saying, “That doesn’t count. I know what co-writing is. Co-writing is very different to writing. I’m not hating on anybody, I’m just saying there’s a big difference between a songwriter and a songwriter who co-writes.”

Though he later added that co-writing “doesn’t mean that the outcome can’t be really great,” Albarn still proceeded to compare Swift with another singer. He said, “A really interesting songwriter is Billie Eilish and her brother. I’m more attracted to that than to Taylor Swift.”

Later that day, Swift took to Twitter and called out the “Coffee & TV” singer. Reposting the official LA Times’ tweet with Albarn’s quote about her, she wrote, “@DamonAlbarn I was such a big fan of yours until I saw this. I write ALL of my own songs. Your hot take is completely false and SO damaging. You don’t have to like my songs but it’s really f*cked up to try and discredit my writing. WOW.”

She even followed up the tweet with a cheeky “PS I wrote this tweet all by myself in case you were wondering.”

Not long after Swift’s tweets, her collaborator and friend Jack Antonoff defended her by tweeting, “I’ve never met damon albarn and he’s never been to my studio but apparently he knows more than the rest of us about all those songs taylor writes and brings in. herb.”

Later the same day, Albarn logged onto Twitter and issued a direct apology to Swift, claiming he didn’t intend to undervalue her writing skills in the LA Times interview. “I totally agree with you. I had a conversation about songwriting and sadly it was reduced to clickbait,” wrote the Gorillaz frontman. “I apologize unreservedly and unconditionally. The last thing I would want to do is discredit your songwriting. I hope you understand.”

Considering Albarn’s quotes were part of a lengthy, detailed Q&A story, it’s unclear exactly what was “reduced to clickbait.” But to borrow Swift’s own words, she would very much like to be excluded from this “damaging” narrative.

This article was originally published on Jan. 24, 2022