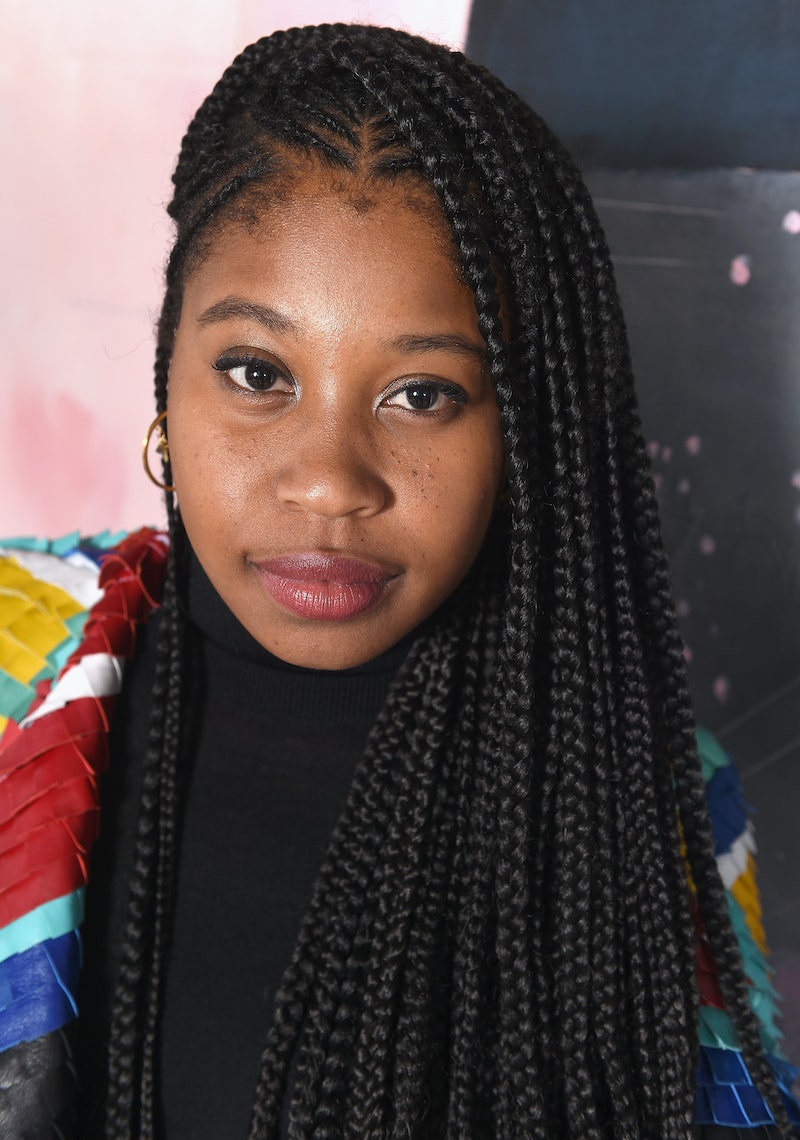 Before signing on to portray Deborah Johnson in Judas and the Black Messiah, Dominique Fishback had been longing to play a romantic lead. She was even in the process of writing such a role for herself, penning a Romeo & Juliet-inspired love story about two members of the Black Panther party. So when she was contacted by director Shaka King to play the love interest in Judas and the Black Messiah, the story of the Black Panthers leader Fred Hampton (Daniel Kaluuya), Fishback felt as though she had manifested the opportunity. “I just think, what better romance would I get to tell than to tell a true-to-life story?” she tells Bustle.

But while she was honored to portray Hampton's wife, she wanted to ensure that her role was more complex than simply a supportive wife on the sidelines of an impactful story. After reading the script, she came to King with a few notes regarding the depth of her character, a passionate poet who wasn’t heard reciting any poems throughout the film. “I wanted to make sure that she had a world and a life outside of Chairman Fred and a life outside of the Black Panther party,” Fishback, 29, says of her suggestions. “In terms of storytelling and the depths of characters, of women, of Black women, I wanted to make sure that she had something that was her own, which is the poetry.”

Not only did King take Fishback's note about adding Johnson's passion for poetry into the script, he implored the actor to "take a shot" at crafting the poems herself. An experienced poet, Fishback gladly accepted the task, writing several poems for Johnson and Hampton to read in the film. While their romance is already a bright spot in the otherwise tragic true story of the events leading up to the Chairman’s death in late 1969, the addition of her poetry provides viewers with a deeper look into the warm, youthful bond that serves as a foundation for these dedicated activists. “I told Shaka, ‘I know it's not a romance, but that's what I'm gonna [bring to it],’” Fishback says. Below, Fishback reflects on meeting the real-life Deborah Johnson, humanizing the Black Panthers through romance, and representing true Black love onscreen.

You brought a lot to Judas: you wrote poetry for it, worked to imbue it with a sense of romance, and gave life to the character of Deborah Johnson on screen. What was the most challenging part of preparing for this film?

I'm a poet and a lover of words, and so I really, really let them weigh on me. But "challenge" is such a hard word to use when I think about the fact that Mama Akua [Njeri], formally known as Deborah Johnson, is still here with us, and the assassination of Chairman Fred is something that she has to live with. What I will say is when she came to set the first time, that was really intimidating. We went around the table and said why we all wanted to do this film, and she pulled Daniel and I to the side and said, "So how are you gonna approach the characters?" I said something about being a vessel for her spirit to flow through me, and she's like, "Well, what if my spirit don't mess with your spirit?" I was like, "Yikes, shouldn't have said that." So we started, and then I hugged her at the end and said, "I hope you know my heart," and she said, "I do. I just had to give you a little bit of a hard time."

Have you heard her reaction after seeing the film?

Yeah, we got to do an interview together. One of the things she said was when she saw Daniel and I onscreen, it made her miss that love. It made her remember that love, and for me, I'm an epic romantic, so that was [incredible].

You've spoken about setting out to paint the Black Panthers in a more positive light than the group has historically been viewed with this film. Do you feel that the film's focus on Fred and Deborah's love story helped to humanize the Panthers?

I do believe that the love story helps to humanize [them]. We get to see them on a personal level where Chairman Fred is a little shy to talk to a woman that he kinda likes, and vice versa. To see them move like that, and [see] that they were young, [because] we don't really believe [how young they were] because they had a huge responsibility. So when you look at Chairman Fred, you don't think 21. When you look at Mama Akua, Deborah Johnson, you don't think 19.

Their love is definitely one of brighter, more purely positive aspects of this story. What elements of their relationship did you feel were most important to highlight?

Daniel and I talked about the joy. We don't really get a lot of moments where we can [express their joy] — we have to steal them, pretty much. We have to steal those quiet moments, those tender moments, the laughing, the giggles. So we really wanted to make sure that when we got those opportunities we [used them].

As a writer, what aspects of Black love would you like to put on screen that you haven't seen?

I mean, we definitely get to tap into this with Judas, like the tender moments where they're playing with each other's feet, and she says, "Your feet are cold!" That kind of stuff, that tender stuff. You know that moment in Romeo & Juliet where Leo [DiCaprio] sees Claire [Danes] through the fish tank and all time is suspended? Like, can we suspend time? Can we suspend time on Black and brown skin? Can we do that?