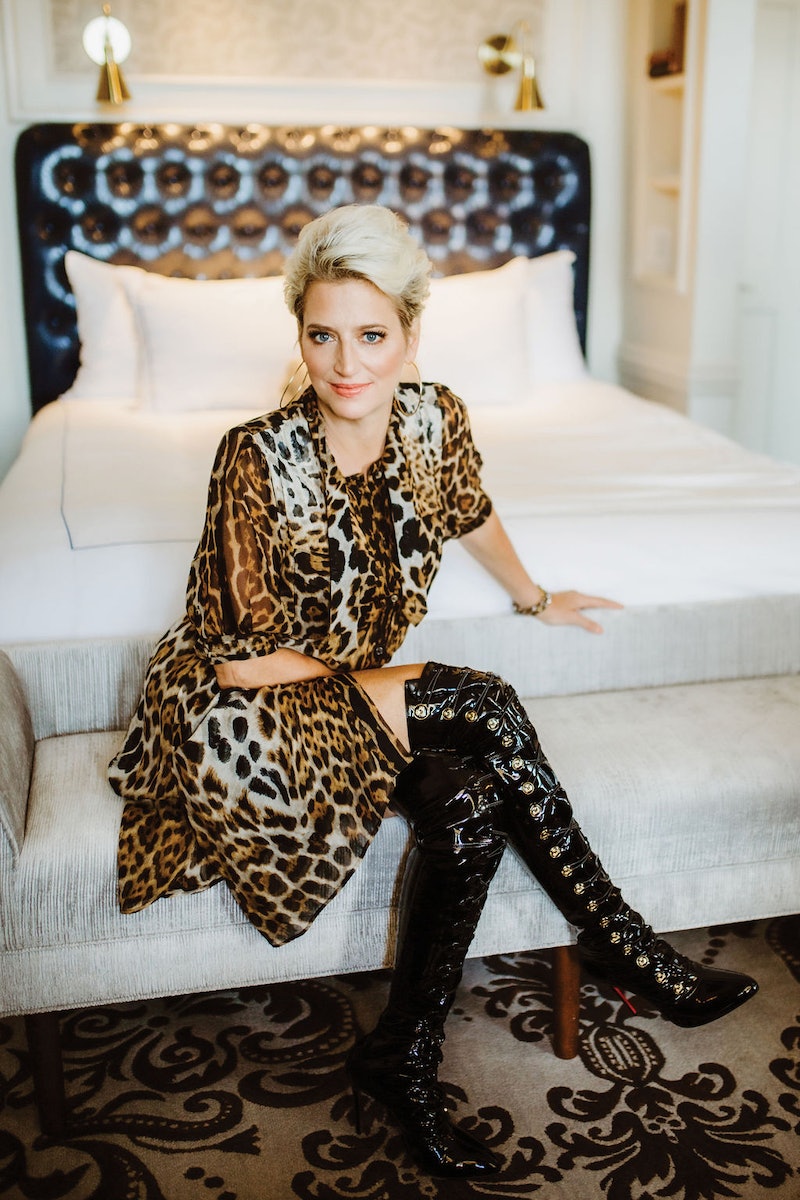 Following her exit from The Real Housewives of New York City after six seasons last summer, Dorinda Medley was ready to start a new chapter — literally. Amid the coronavirus pandemic, she hunkered down at her beloved Blue Stone Manor in the Berkshires and began writing the memoir she’d always wanted to write. The result is Make It Nice — out Aug. 17 — a rumination on the aspects of her life RHONY fans didn’t get to see, including her time living in London and marriage to the late Richard Medley.

Fans won’t be alone in learning something new about the socialite, who tells Bustle she wanted to let the world know she had a “very interesting, long, engaging life” before becoming a Housewife. To edit the book, she enlisted the help of her 26-year-old daughter Hannah Lynch, who got to see Medley as way more than her mom. “Hannah didn’t realize that I was young once,” she says, jokingly. “I was out there dating, I was sexual, I had boyfriends. I talk about my first love, what it meant to me, and how he introduced me to sex. Hannah was like, ‘I don’t think I want to edit this chapter.’”

Below, Medley previews what else is in her new book and reflects on RHONY — including if she’d ever return to the franchise.

How did it feel to drum up old memories while writing at Blue Stone Manor?

I thought it was kind of ironic that I [grew up] in Great Barrington [Massachusetts] and always dreamed of leaving, and I somehow came full circle two miles from my [childhood] home. I had all my old yearbooks, all my old baby pictures. I went through everything at my mother’s house, and it really triggered me thinking, “God, you’ve been through a lot of stuff.”

If the book tells you anything, it’s that you just have to keep moving. It’s not always pretty. My mother gave me such great advice. I once said, “I’m bored,” and she said, “Well get ready for life because 95% of life is monotony. If you’re lucky, you’ve got 5%, and it’s how you deal with that monotony, how you push forward, how you keep it moving. You stay strong and you don’t give up.” And that’s my motto in life: There is no “no,” just a harder “yes.”

One of your famous RHONY lines was, “Say it, forget it. Write it, regret it.” Is there anything in the book you were nervous you might regret?

No. I sort of shoot from the hip and I’m very straightforward. Before I even started Housewives, I remember one of the people who was interviewing me said, “Are you ready for the skeletons to come out?” And I was like, “Yeah!” You have to — as Lisa Rinna would say — “own it.” Whatever I did, I’m willing to share and talk about how I handled it. It’s boring if life is just all about positives.

How did it feel revisiting Richard’s memory while writing the book?

That period after he passed away has always been hard. I was sort of holding the fort down, and it was all about survival. But, really, when Hannah and I talked about it, or I talked about it to my mom, everybody said that it was all hands on deck. It was a sad time. It was treacherous waters, and I think when I was going through it, I was too fearful to realize how treacherous the waters were, so I just kept going.

What were some other particularly difficult times to revisit?

I didn’t grow up with a lot of resources. I grew up in a very wonderful, beautiful middle class family. My dad was a telephone man, and my mother was a bookkeeper for my grandfather. There was no real push to venture as far as I did, so I definitely think, god, I really took a lot of risks that thankfully worked out in the long run. But I didn’t know anybody in New York City, I didn’t have any money, and all of a sudden, I’m moving to Hong Kong. Who would think it?

It’s interesting to see how each situation that you go through kind of adds a little more color to your quilt. There’s a reason why you’re different in your 50s than when you’re 20, 21, 22, because you go through sh*t. I look at Hannah and she thinks she’s figured out the world, and I’m like, “Oh, you just wait.” You think it’s all a Tiffany’s sterling silver frame with a black and white picture in it, like, oh, isn’t this cute? No, sometimes it’s a disaster.

I don’t really regret a lot of the stuff in Housewives. I think it was a healing period. It was therapeutic. If I went back, I’d tell my younger self to not be so fearful. Like, you can do it. You’re stronger than you think. My mother used to say to me all the time, “Oh, Dorinda Cinkala, you have the gift of gab and charisma, and that will get you anywhere you want.” I wish I had that much confidence.

What tagline or Dorinda-ism would you give this chapter of your life?

“I’m the best guest at any cocktail party you’ll ever have.”

Would you ever return to RHONY?

A year in a Housewife’s life is like 10 years in anyone else’s. I loved every minute of Housewives, it was a huge growing period for me. I’m incredibly appreciative, but you just don’t know. I don’t even know if they’d want me back. I think if it’s right for everybody involved and if I’m still interesting enough and have some Dorinda-isms left in me, who knows? Never say never.

What else is next for you?

I would love to start dating. I haven’t had a proper date in a year and a half. I’ve dabbled a little bit, but then COVID hit. I’m looking for just a nice companion. I don’t want to have any more kids, but a man I could take on a weekend, travel with and hang out with. That’s where I am. It would be nice just to have someone to go to dinner with and go up to Blue Stone Manor. A friend with benefits.