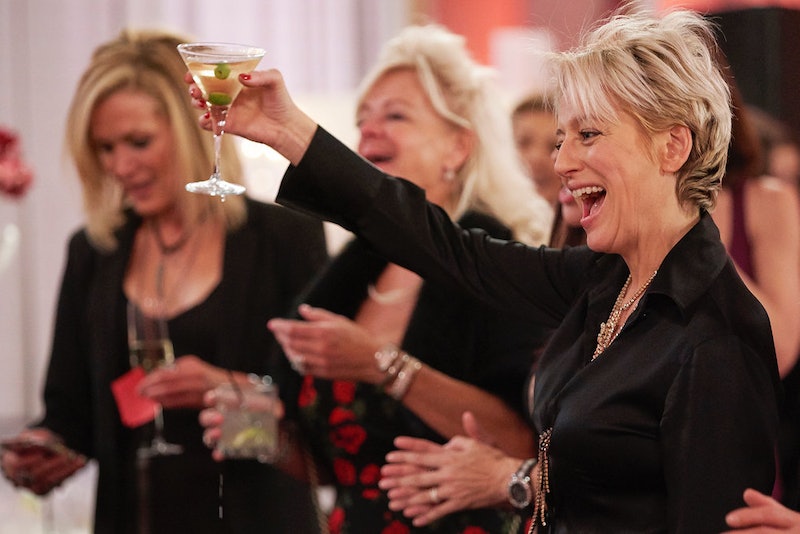 She cooked, she cleaned, she made it nice, and now, she's moving on. Dorinda Medley is leaving The Real Housewives of New York City, as she announced on Instagram Tuesday, Aug. 25. So fans can say goodbye to her unforgettable one-liners, and most unfortunate of all, no more girls trips to Blue Stone Manor, her now-iconic Berkshires home— or as she calls it, "the Bezerkshires."

Medley announced the sad news in an Instagram post, using a photo taken from the upcoming Season 10 reunion, which will mark her last appearance as a regular on the show. "What a journey this has been," she wrote. "I have laughed and cried and tried to Make it Nice... But all things must come to an end." The star explained that the show was "a great outlet" for her following the death of her late husband Richard, and thanked her co-stars and Bravo for making it a great experience.

"I have met so many interesting people and learned so much about myself, about life and about women along the way," she said. "Thank you to Bravo and NBC for the incredible ride and to my cast mates for constant stimulation and entertainment. I wish you all health, happiness and success." She concluded the post with her signature "Clip!" slogan, one of the many things that will be missed.

Medley joined the series during Season 7 as a longtime friend of the ladies and quickly became a fan favorite. The news comes two months after Medley's co-star Tinsley Mortimer unexpectedly left the show in the middle of Season 12, after deciding to move to Chicago when her now-fiancé Scott Kluth proposed to her. Last year, shortly before Season 12 started filming, OG Bethenny Frankel announced her departure from RHONY after five seasons, shocking fans and her fellow cast mates. Medley's news means that Ramona Singer, Luann de Lesseps, Sonja Morgan, and new addition Leah McSweeney are currently the only full-time Housewives left on RHONY.

While fans are understandably devastated by the announcement, Medley's fellow Housewives have nothing but well wishes for her. In the comments section, Singer wrote a short and simple "All the same to you," McSweeney said she was "gonna miss" her, and Bravo honcho Andy Cohen called her "unforgettable." Even though she's no longer on the show, Frankel posted a photo of her and Medley to Instagram and wrote her own tribute. "Don't let anyone or anything dull your sparkle," she said. "You will be missed... let the next chapter begin."

The one positive takeaway from Medley's departure is that her absence could allow for some much-needed diversity on the RHONY cast, something which McSweeney has called for, given that there hasn't been a Black Housewife on the show's 12 seasons. "I hope that there’s not only diversity of race but an even deeper diversity of where someone lives or what their interests are,” she told Page Six on Aug. 8. "I think that it is gonna head in that direction.” Cohen told US Weekly that he was excited about adding diversity when talking about the show's next season. Hopefully, this news will make Bravo follow through.