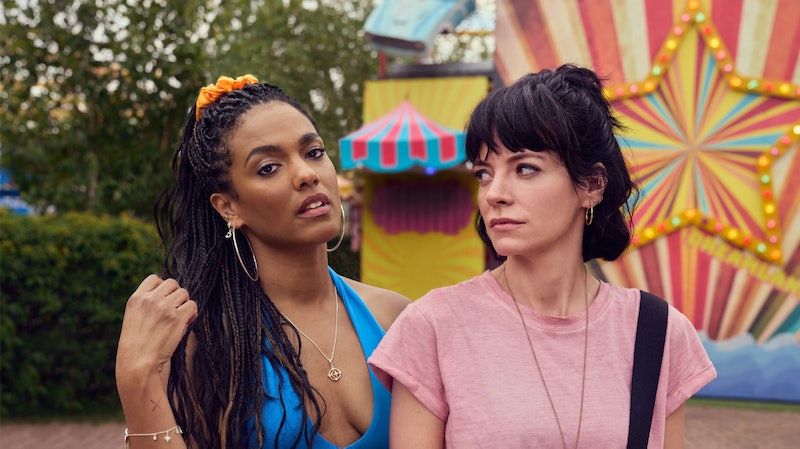 Lily Allen’s first lead role in a TV show looks like it’s shaping up to be a doozy. Allen plays the secretive sister at the heart of a new comedy-drama tackling fraught family dynamics. Though she’s acted before – Allen previously had smaller parts in How To Build A Girl, Elizabeth, and even Neighbours (yep, really) – this is by far her biggest television role to date. Intriguingly, Allen was spotted litter picking in a hi-vis jacket and dodging hen parties during filming in Margate earlier in July, as Mail Online reports. So, what do we know about the upcoming new comedy Dreamland? Get up to speed below.

Dreamland is currently filming in the seaside town of Margate, in Kent – and takes its name from the town’s resident fairground and amusement arcade of the same name. The series is created by Irish actor and Catastrophe star Sharon Horgan and based on her BAFTA-winning short film Morgana Robinson's Summer. Released in 2017, the short centres around a baby shower on a scorching hot day, and the secrets that subsequently come out of the woodwork. And according to a synopsis from Sky, Horgan’s new series will feature a number of the same characters, and similar themes.

It reads: “Set in the sun-drenched British seaside town of Margate, it is a dark comedic exploration of multi-generational female relationships, and their (somewhat dysfunctional) family dynamics. Eldest sister Trish (Freema Agyeman) is pregnant for the third time with her partner Spence (Kiell Smith-Bynoe). And this time, she’s decided: it’s going to be a girl. Her two sisters, Clare (Gabby Best) and Leila (Aimee-Ffion Edwards), rally around her with their mum (Frances Barber) and their Margate legend nan (Sheila Reid), ‘manifesting’ a little girl at Trish’s ‘mani-festival’. But, when their other sister, Mel (Lily Allen), makes an unexpected reappearance back into their lives, her return threatens to destabilise the entire family. A knock on their door and their ‘Dreamland’ is no more.”

Though a release date is yet to be announced, it has already been confirmed that the show will hit Sky Comedy and NOW TV at some point in 2023.

More like this
Netflix Just Rebooted A Classic ‘90s High School Drama
By Maxine Harrison
This New Comedy Is The Perfect Combination Of 'Jane The Virgin' & 'New Girl'
By Darshita Goyal
WAGatha Christie The Series Is Officially... Coming To TV
By Maxine Harrison
The Beyhive Is Buzzing About Beyoncé’s 'Renaissance' Album
By Sam Ramsden
Get The Very Best Of Bustle/UK