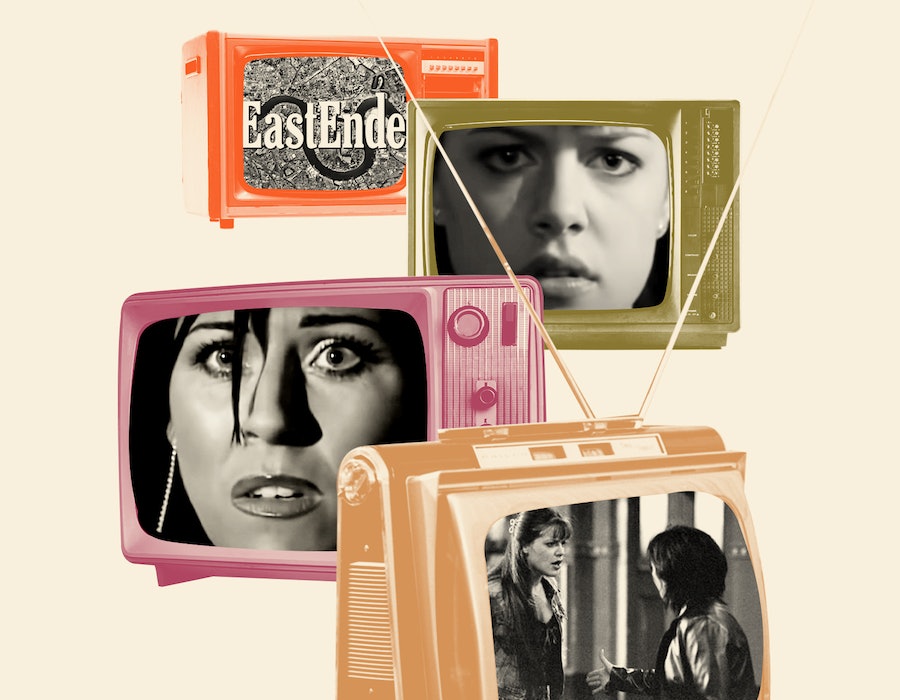 Zoe Slater stands, surrounded by her family – she’s got an announcement to make. “I’m leaving Walford,” the youngest Slater sister declares, smugly. In fact, she’s says, she’s leaving the UK all together, heading to Spain to work at her uncle Harry’s pub. Her older sister Kat, a face like thunder, tells her she can’t go. Tempers and voices rise, and Zoe and Kat storm out into the street, while the other siblings beg them to “leave it”.

It’s dark on Albert Square, and as Zoe marches past the Queen Vic towards home, Kat grabs her arm. Furious, Zoe shouts the line that will go down in Eastenders history: “You can’t tell me what to do, YOU AIN’T MY MOTHER!!!”

In that moment, Zoe finds out her mum isn’t really dead – in fact, she’s her older sister. And later, it’s revealed that her father is really her uncle Harry, who assaulted Kat when she was young.

It’s 2001. On British television, the allure of reality shows is about to take hold, with Craig Phillips having emerged as Big Brother’s first ever winner only a month before the unforgettable Eastenders episode aired. But, for now, it’s the fictional drama of British soap operas that continues to reign supreme on weekday evenings.

EastEnders is racking up some of its biggest viewer numbers to date and cleaning up at television awards. That year on Albert Square, the ‘Who shot Phil Mitchell?’ storyline takes off, Sharon returns and, in October, more than 16 million people tune in to BBC One at 7 p.m. to witness the bombshell revelation occur between the Slater sisters.

Whether you remember the scene in great detail, or have become familiar with it through the pop culture references that still endure today, there’s no doubt that “You Ain’t My Mother” is one of television’s most epic mother-daughter moments. Rewinding to the early 2000s, I spoke to then senior scriptwriter Tony Jordan, and director Clive Arnold, about what went into creating the iconic scene.

In the year 2000, Tony Jordan approached EastEnders casting director Julia Crampsie to talk about the creation of a new family on Albert Square. This time, he wanted to do things a little differently. “I was talking to Julie one day and said, ‘Instead of just me creating the character and you finding them, why don’t you get 20 or 30 London actors you’re excited about or you’ve seen in the theatre, and we’ll book a rehearsal room?’”

Crampsie agreed. “Gradually we put different people together [in the rehearsal room] and then, right in front of my eyes, this family started taking shape,” Jordan recalls.

The chemistry between the actors was electric, and the Slater family – comprising Charlie, Mo, Kat, Lynne, Little Mo, and Zoe – was born. The Slaters went on to have some of the show’s most famous storylines, including Little Mo hitting her abusive husband Trevor with an iron; Stacey and Jean Slater joining the crew; and, of course, the harrowing baby swap storyline between Kat and Ronnie Mitchell.

“I still remember the moment Jessie Wallace walked into the rehearsal room ...She came in and basically was Kat Slater – she did that dirty laugh, and it was hilarious.”

While the whole Slater family became popular, Eastenders fans will all agree that there’s no one quite like Kat Slater. With her quick humour, love of leopard print, and fierce family loyalty, she left an indelible mark on the square.

“I still remember the moment Jessie Wallace walked into the rehearsal room,” Jordan tells me. “She came in and basically was Kat Slater – she did that dirty laugh, and it was hilarious.”

And where would Kat be without her Alfie? The character – played by Shane Richie – was another of Jordan’s creations, and one he felt a close connection to. He tells me that he was a market trader back in the day, just like Alfie, and so the character grew out of personal experiences.

“Around the time I was doing Eastenders, I met my wife,” Jordan adds. “So Alfie and Kat is basically me and my missus.”

The creation of the Kat-Zoe storyline stretches much further back than viewers may realise. In fact, Jordan says it began to take shape as soon as the casting for the Slaters was decided.

Jordan noted the age difference between Wallace and Michelle Ryan (Zoe) straight away, and began thinking about the opportunities that could bring in terms of storylines. “I thought, well, you know what, she could be a mum,” he says. “If Kat had Zoe when she was like really young, that could be our first big secret.”

It remained a secret until the aforementioned iconic scene, which is also the point where viewers were first let in on the real relationship between Kat and Zoe.

“It was as much a shock to the viewer as it was to Zoe.”

“The twist of Kat being Zoe's mother was always intended,” says director Clive Arnold. “And [it came] after a year of the viewer getting to know and love the Slater family. It was as much a shock to the viewer as it was to Zoe.”

But Jordan insists he and the Slater cast members left a few ‘Easter eggs’ for the audience to find along the way. “No one else would see it [at the time], but if you ever if you ever go back and look [at scenes between Kat and Zoe], you'll see that there's something in there that [some of the Slaters] know, but you just don't know what it is.” Eastenders fan forums seem to agree – avid viewers note hints, such as pointed close-ups of Kat, discussions about pregnancy, and a scene where Kat says “she’s my baby” when Zoe attends a party she shouldn’t be at.

On the day of shooting, Arnold recalls being behind schedule. “With the end of the day looming, everyone was very focussed on getting the job done before we ran out of time,” he says. The “You Ain’t My Mother” scene ended up being shot in 30 minutes. “It was very fast – too fast!” says Arnold.

“I knew we needed to get two outstanding performances ...I think Jessie and Michelle gave us that in spades.”

The scene was captured on a handheld camera, which Arnold says was unusual for EastEnders at the time, “but everyone got on board, and stepped out of their comfort zones to produce something that has become very memorable.” The equipment allowed the scene to flow straight out into the square, following Kat as she chases Zoe, so the audience feels right there with them. And, of course, there’s the famous zoom-in on Kat’s face after she lets the secret out, her mouth slightly ajar, her eyes wide in horror.

“I knew we needed to get two outstanding performances,” says Arnold. “Kat revealing her secret in desperation, because she has run out of options, and Zoe being absolutely floored, and unbelieving of the news. I think Jessie and Michelle gave us that in spades.”

The legacy of this Slater sisters scene very much lives on, featuring in pop culture round-ups, and meme accounts all over the internet.

“I have worked with actors who weren't even born at the time, but they’ll come and talk to me about that moment,” says Arnold. “To know it’s made such an impact is very special.”

“I have worked with actors who weren't even born at the time, but they’ll come and talk to me about that moment.”

It’s a sentiment echoed by Jordan. Despite having worked on hundreds of scripts in his time, this is the one people still want to know about. “It’s the only line I’ve ever written that I hear constantly,” he says.

“You Ain’t My Mother” will no doubt be echoing around the Eastenders square, and beyond, for decades to come.

More like this
'The Lord of the Rings: The Rings of Power' Revisits Iconic Spots From 'The Hobbit'
By Darshita Goyal
You’ll Definitely Recognise Both Of Ty Tennant’s Parents
By Maxine Harrison
'House Of The Dragon’s Theo Nate Is A “Massive” 'GoT' Fan
By Maxine Harrison
'Rings Of Power' Actor Tyroe Muhafidin Is Also A Budding Musician & Style Icon
By Frances Stewart
Get The Very Best Of Bustle/UK