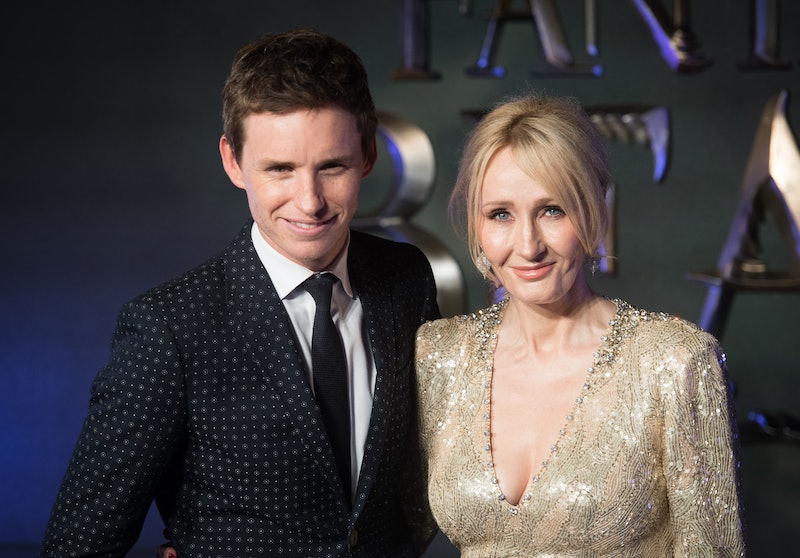 Eddie Redmayne played a transgender woman for his Oscar-nominated role in The Danish Girl and has repeatedly claimed to be an ally for the LGBTQ community. Now, he is now also coming to the defense of J.K. Rowling, who has voiced beliefs about transgender people that invalidate their gender identity. Despite having condemned her beliefs in a statement this summer, Redmayne is now calling the online hatred against Rowling "absolutely disgusting."

The Fantastic Beasts star defended the author in a new interview with The Daily Mail, revealing that the "vitriol" against Rowling prompted him to write her a private note of support. However, he also made sure to stand up for the transgender community, saying that insults against them are "equally" disgusting. "Similarly, there continues to be a hideous torrent of abuse towards trans people online and out in the world that is devastating," he said. The comments come as Redmayne is currently shooting the third film in the Fantastic Beasts saga with Rowling, who wrote the screenplay and is a producer on the film.

In the past months, the Harry Potter author has come under fire for her statements about the transgender community. In June, she wrote a blog post and a series of tweets arguing that the gender identity of trans people somehow invalidates the experiences of women. "If sex isn’t real, the lived reality of women globally is erased," she wrote. "The idea that women like me, who’ve been empathetic to trans people for decades, feeling kinship because they’re vulnerable in the same way as women—i.e., to male violence—‘hate’ trans people because they think sex is real and has lived consequences—is a nonsense."

At the time, Redmayne spoke out against Rowling's statements, following in the footsteps of Harry Potter stars Daniel Radcliffe and Emma Watson. "Trans women are women, trans men are men and non-binary identities are valid," he said in a statement, reported by Variety. "I would never want to speak on behalf of the community but I do know that my dear transgender friends and colleagues are tired of this constant questioning of their identities, which all too often results in violence and abuse."

It's unclear what triggered Redmayne's defense of the author, but his most recent comments come on the heels of #RIPJKRowling. The hashtag began trending on Twitter in September after news broke that Rowling's newest book, Troubled Blood, featured a cis male serial killer who dressed as a woman to kill.

Following his new comments, the Oscar-winner was hit with his own backlash on Twitter, with many pointing out his controversial portrayal of a trans woman in 2015's The Danish Girl, for which he was nominated for an Academy Award.

It's also important to note that trans people face much more abuse and violence — on Twitter and in real life — than Rowling, a privileged white woman, making the online hate anything but "equal," as Redmayne's statements suggested. As reported by the 2015 U.S. Transgender Survey, over 46% of transgender people say they regularly face verbal harassment for being transgender, nearly one in ten respondents reported being physically attacked due to their identity, and almost half of the respondents said they were sexually assaulted in their lifetime.