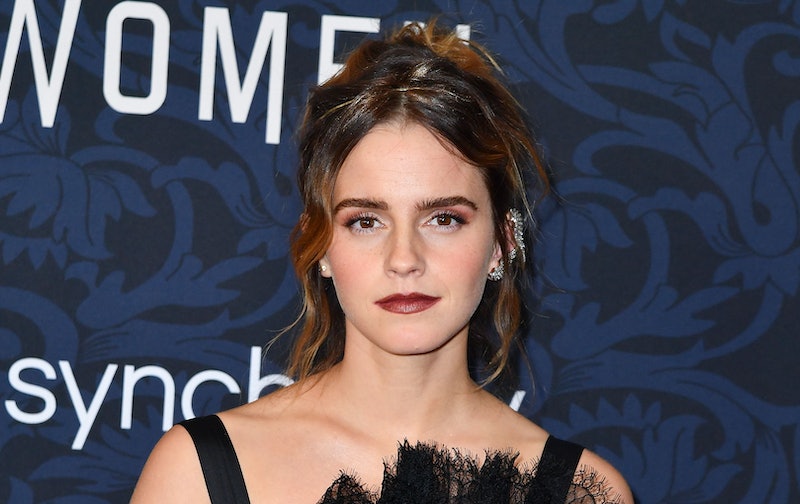 Just a few hours after J.K. Rowling defended her transphobic tweets, another Harry Potter star has come out in opposition of her views. "Trans people are who they say they are and deserve to live their lives without being constantly questioned or told they aren't who they say they are," Emma Watson tweeted seemingly in response to Rowling. She continued, writing specifically to her transgender fans. "I want my trans followers to know that I and so many other people around the world see you, respect you and love you for who you are." She then encouraged fans to donate to feminist organizations that advocate for trans rights — Mama Cash and Mermaids — and wished everyone a Happy Pride Month.

Though she did not mention the controversy surrounding the Harry Potter author, Watson's tweets seem to be a response to Rowling's recent tweets, which, among other things, questioned "if [trans people] were discriminated against on the basis of being trans." On Wednesday, shortly before Watson's tweets, the author doubled down on her anti-trans rhetoric in a blog post, which included the suggestion that allowing transgender women to use the women's restroom could result in assault — a popular talking point among right-wing conservatives.

Watson is now part of a small group of Harry Potter franchise stars who have rebuked Rowling's tweets. Daniel Radcliffe issued a strong statement against her comments published by The Trevor Project. "Transgender women are women," he wrote. "Any statement to the contrary erases the identity and dignity of transgender people and goes against all advice given by professional health care associations who have far more expertise on this subject matter than either Jo or I." Evanna Lynch and Eddie Redmayne, who stars in the Harry Potter spinoff franchise, Fantastic Beasts, also commented, as did Cho Chang actor Katie Leung.

More like this
Anne Hathaway Shared A "Thrilling" 'Princess Diaries 3' Update
By Darshita Goyal
Rupert Grint Just Shared A *Major* Update About Ron Weasley’s Future
By El Hunt
'The Queen’s Gambit' Season 2 Tweet Wasn’t From Anya Taylor-Joy
By Mary Kate McGrath, Jack Irvin and Grace Wehniainen
9 Time Catherine Cawood Was An Absolute Badass In Happy Valley
By Sophie McEvoy
Get Even More From Bustle — Sign Up For The Newsletter
From hair trends to relationship advice, our daily newsletter has everything you need to sound like a person who’s on TikTok, even if you aren’t.